George W. Bush may have started the wars in Afghanistan and Iraq, but it's up to the new president to resolve them. 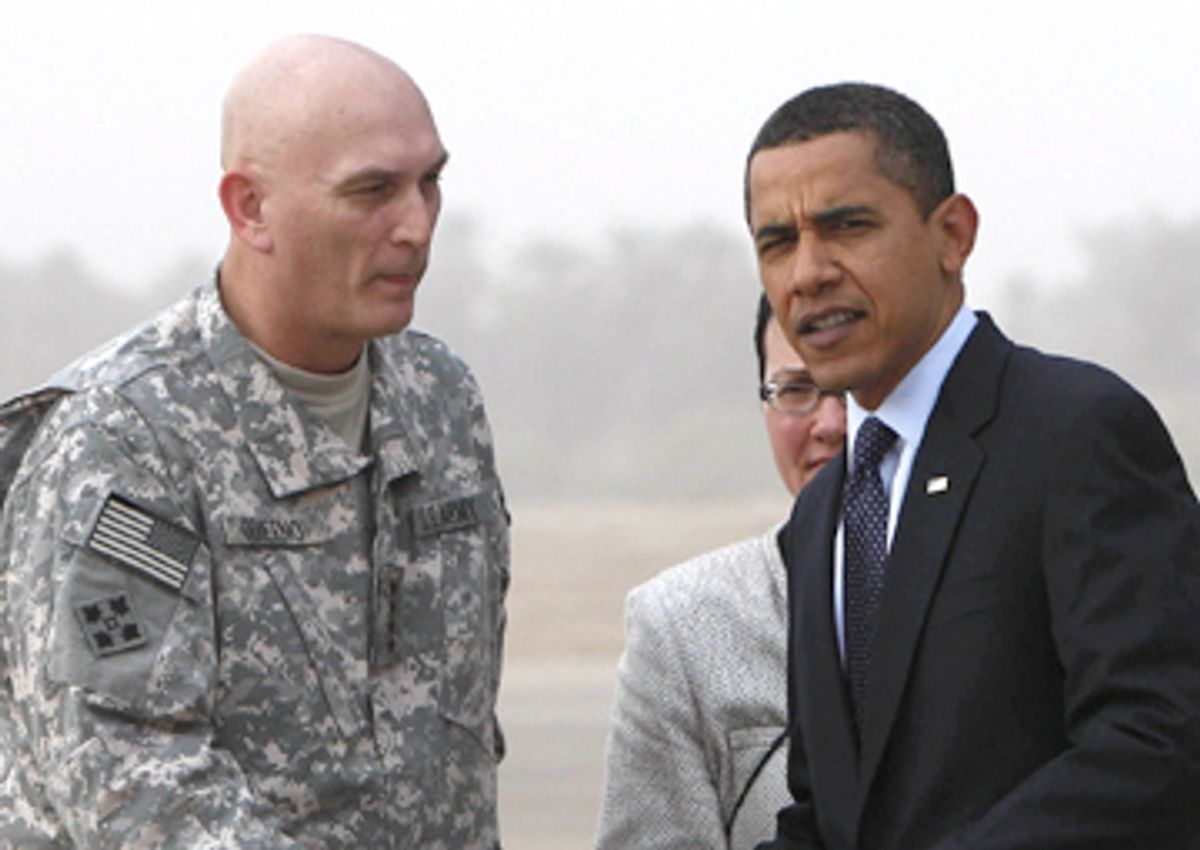 After inheriting two bungled wars, the Obama administration has gotten a pass from citizens troubled by more immediate economic fears. The president even ventured a mild joke during a "60 Minutes" interview. "If you had said to us a year ago that the least of my problems would be Iraq, which is still a pretty serious problem," Obama said, "I don't think anybody would have believed it."

That grace period appears over. Recent events in Iraq, Afghanistan and Pakistan make it clear that all the charm and good intentions in the world haven't altered the fundamental situation.

Six years into the American occupation, there's still no assurance that Iraq won't careen into civil war after U.S. troops withdraw. Sectarian violence has risen ominously. A recent Pentagon report obtained by The New York Times concluded that only 17 of 175 Iraqi army battalions and two of its 34 National Police battalions can stand on their own. Surge or no surge, the political compromises necessary to sustain democracy haven't been made.

Iraq remains three nations under one name. The Bush/Cheney team's blunders -- invading on the cheap, bungling the occupation -- have left the president no good options. They broke it. But after U.S. troops pull out, Obama will own it.

In Afghanistan, the situation is so shaky that Gen. David McKiernan -- seen recently arguing that over 100 Afghan civilians killed by a U.S. airstrike might have been victims of Taliban fighters -- has been relieved of his command. Nobody believes the 17,000 additional troops Obama's sending can impose a military solution. He and Defense Secretary Robert Gates appear to be heeding a sports proverb: Always change a losing game. McKiernan is portrayed as cautious and plodding. McKiernan's successor, Gen. Stanley McChrystal, is expected to cut a more dashing profile.

Not for nothing, however, has Afghanistan long been known as "the graveyard of empires." Left to their own devices, the Afghans might divide into eight or 10 fiefdoms. Its largely illiterate tribes live by the feud; foreign invaders unite them. Afghanistan's forbidding landscape makes it a modern soldier's nightmare.

Campaigning in 2007, Obama argued that the Bush administration's diversion of resources to Iraq without eliminating al-Qaida's Afghan hideaways should be reversed. "We've got to get the job done there," he said "and that requires us to have enough troops so that we're not just air-raiding villages and killing civilians, which is causing enormous problems there."

So there he was last week, flanked by the presidents of Afghanistan and Pakistan, doing a passable imitation of Lyndon Baines Johnson: "I ... made it clear that the United States will work with our Afghan and international partners to make every effort to avoid civilian casualties as we help the Afghan government combat our common enemy."

In private, Obama is said to have been more compassionate. Secretary of State Hillary Clinton apologized more fulsomely: "I wish to express my personal regret and certainly the sympathy of our administration on the loss of civilian life in Afghanistan ... We deeply, deeply regret that loss."

Alas, as veteran military correspondent Joseph L. Galloway points out, those losses are an almost inevitable consequence of U.S. tactics: "American military reinforcements ordered in by President Obama can only make that situation worse as they fan out into small remote outposts where their only recourse when they're attacked is to call in airpower."

Afghan villagers whose hearts and minds we're trying to win react as Americans reacted to 9/11: with rage and sorrow that apologies won't change.

In neighboring Pakistan, hundreds of thousands are fleeing their homes ahead of an army advance into remote frontier regions where Taliban extremists seek to impose Sharia law, where al-Qaida's senior leadership is thought to be hiding and where the Islamabad government has never truly held sovereignty. There, too, hundreds of civilians have been killed by American drone bombers targeting al-Qaida.

Obama has described the border region as "the most dangerous place in the world" for Americans. On TV chat shows, national security thinkers wax portentous at the dire prospect of the Taliban gaining control of Pakistan's nuclear arsenal. In sober moments, most admit that this is as unlikely as white supremacist militias overrunning the Pentagon, but it definitely makes for exciting melodrama.

And TV melodrama is how America governs itself. Within the Washington establishment, it's well-nigh treasonous to point out that we're talking here about the absolute end of the earth. That the United States hasn't got the manpower, resources or political will to control territory Pakistan's own government can't tame, and that the habit of treating the entire planet as a huge game of Risk is leaving the United States as overextended militarily and financially as the Spanish Empire in 1588 -- the year its Armada was destroyed off the coast of Ireland.

Privately, Obama might agree. As a political matter, he cannot.