An FBI agent testifies that an al-Qaida prisoner provided useful intelligence until the CIA got rough -- and casts doubt on Bush's statements about the effectiveness of harsh interrogations. 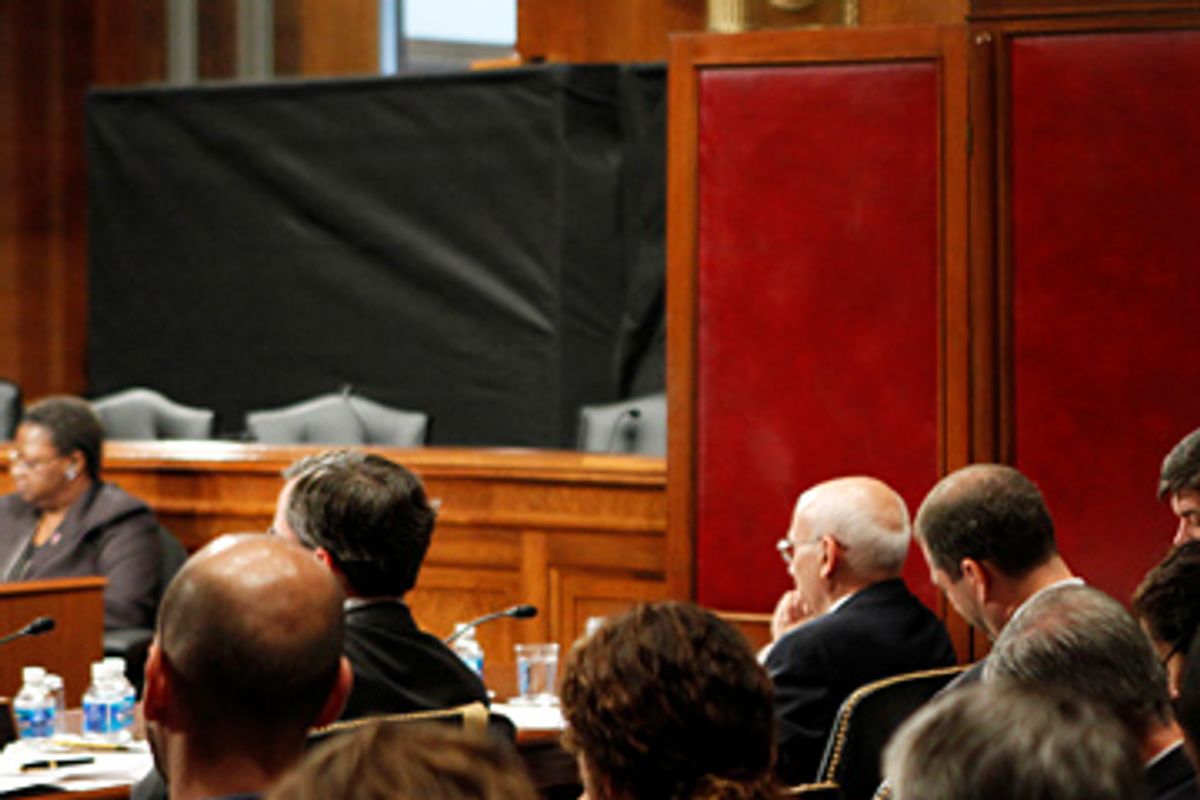 The testimony of a key witness at a Senate hearing Wednesday raised serious questions about the truthfulness of former President George W. Bush's own personal defense of the CIA's brutal interrogation program. Former FBI agent Ali Soufan also indicated that the harsh interrogation techniques may actually have hindered the collection of intelligence, causing a high-value prisoner to stop cooperating.

In the first congressional hearing on torture since the release of Bush administration memos that provided the legal justification for torture, Soufan told the Senate Judiciary Committee that the CIA's abusive techniques were "ineffective, slow and unreliable, and as a result harmful to our efforts to defeat al-Qaida." According to Soufan, his own nonviolent interrogation of an al-Qaida suspect was quickly yielding valuable, actionable intelligence -- until the CIA intervened.

Soufan was with the FBI on March 28, 2002, when the United States captured its first suspected al-Qaida operative after 9/11, a man named Abu Zubaydah, held at a secret location overseas. Soufan had investigated terrorism cases dating back to the East Africa embassy bombings in 1998, and he was one of the first experts called after Zubaydah's capture.

Soufan, who testified at the hearing from behind a partition to hide his identity, worked on a small team of interrogators utilizing tried-and-true techniques that emphasize knowing the detainee's language, understanding his culture, leveraging known information about a detainee, and sometimes using a bit of trickery. The method is based on rapport and is believed by experienced interrogators to result in the most reliable actionable intelligence. "It is about outwitting the detainee by using a combination of interpersonal, cognitive and emotional strategies to get the information needed," Soufan said in written testimony, which he paraphrased on Wednesday.

"For example," Soufan told the committee, "in my first interrogation of the terrorist Abu Zubaydah ... I asked him his name. He replied with his alias. I then asked him, 'How 'bout if I call you Hani?'"

"[Hani] was the name his mother nicknamed him as a child," recalled Soufan. "He looked at me in shock, said, OK,' and we started talking."

"Within the first hour of interrogation," Soufan said, "we gained actionable intelligence." Soufan could not say what that information was because it remains classified. Zubaydah had been injured during his capture, and Soufan's team arranged for medical care and continued talking to the prisoner. Within the next few days, Soufan made one of the most significant intelligence breakthroughs of the so-called war on terror. He learned from Zubaydah that Khalid Sheikh Mohammed was the mastermind behind the attacks on 9/11.

Then, however, a CIA interrogation team from Washington led by a contractor arrived at the secret location. Zubaydah was stripped naked and the contractor began a series of coercive, abusive interrogations, based on Cold War-era communist techniques designed to elicit false confessions. During the Korean War, for example, Chinese interrogators employed the measures to get captured American pilots to make false confessions. "The new techniques did not produce results, as Abu Zubaydah shut down and stopped talking," Soufan explained. "After a few days of getting no information, and after repeated inquiries from D.C. asking why all of a sudden no information was being transmitted ... we again were given control of the interrogation."

As Soufan and his team resumed their interrogation, Zubaydah revealed information about Jose Padilla, the alleged "dirty bomber."

But after that, the CIA and the contractor again took over, using what Soufan called an "untested theory" that the Cold War techniques might work for getting good information. "Again, however, the technique wasn't working," Soufan recalled.

Soufan's team was brought back yet again. "We found it harder to reengage him this time, because of how the techniques had affected him," Soufan noted. "But eventually, we succeeded."

A third time the CIA and the contractor team took over, using increasingly brutal methods. Soufan reported what he called "borderline torture" to his superiors in Washington. In protest of the abuse, former FBI Director Robert Mueller pulled Soufan out of the location.

On Sept. 6, 2006, President Bush revealed the network of secret CIA prisons set up under his command and defended the CIA's interrogation program. On Wednesday, Soufan described Zubaydah as a cooperative prisoner who became uncooperative when abused. Three years ago, Bush described a recalcitrant Zubaydah who accidentally revealed the name of Khalid Sheikh Mohammed and then clammed up -- having been trained to resist traditional interrogation techniques -- forcing the CIA to get rough.

"Within months of Sept. 11, 2001, we captured a man named Abu Zubaydah," Bush said. The president said the CIA arranged medical care for the suspected terrorist's injuries. "After he recovered," Bush said, "Zubaydah was defiant and evasive."

"During questioning, he, at first, disclosed what he thought was nominal information and then stopped all cooperation," Bush said, noting that Zubaydah had revealed the role of Khalid Sheikh Mohammed. Bush did not mention the FBI.

"We knew that Zubaydah had more information that could save innocent lives," the president added. "But he stopped talking. As his questioning proceeded, it became clear that he had received training on how to resist interrogation," Bush went on. "And so, the CIA used an alternative set of procedures."

Soufan's description of events also differs from official Justice Department memoranda defending the CIA program. A May 30, 2005, memorandum from the Justice Department's Office of Legal Counsel, drafted by attorney Steven Bradbury, defends the CIA's program as legal and also effective.

"Interrogations of Zubaydah -- again, once enhanced techniques were employed -- furnished detailed information regarding al-Qaida's organizational structure, key operatives, and modus operandi and identified KSM [Khalid Sheikh Mohammed] as the mastermind of the September 11 attacks," Bradbury wrote in a memo to the CIA. "You have informed us that Zubaydah also provided significant information on two operatives, including Jose Padilla, who planned to build and detonate a 'dirty bomb' in [the] Washington, DC area."

During testimony Wednesday, Sen. Sheldon Whitehouse, D-R.I., asked Soufan if Bradbury's memo was incorrect. "Yes, sir," answered Soufan. The former FBI agent also suggested that Bush had been told "half truths" about the CIA. George Little, a CIA spokesman, suggested to Salon in an e-mail that Soufan might be wrong. "Today we heard one account of the interrogation of Abu Zubaydah," Little said. "There are others."