Life of the potty

Everyone's child obsesses about something. But why did my son choose urinals? 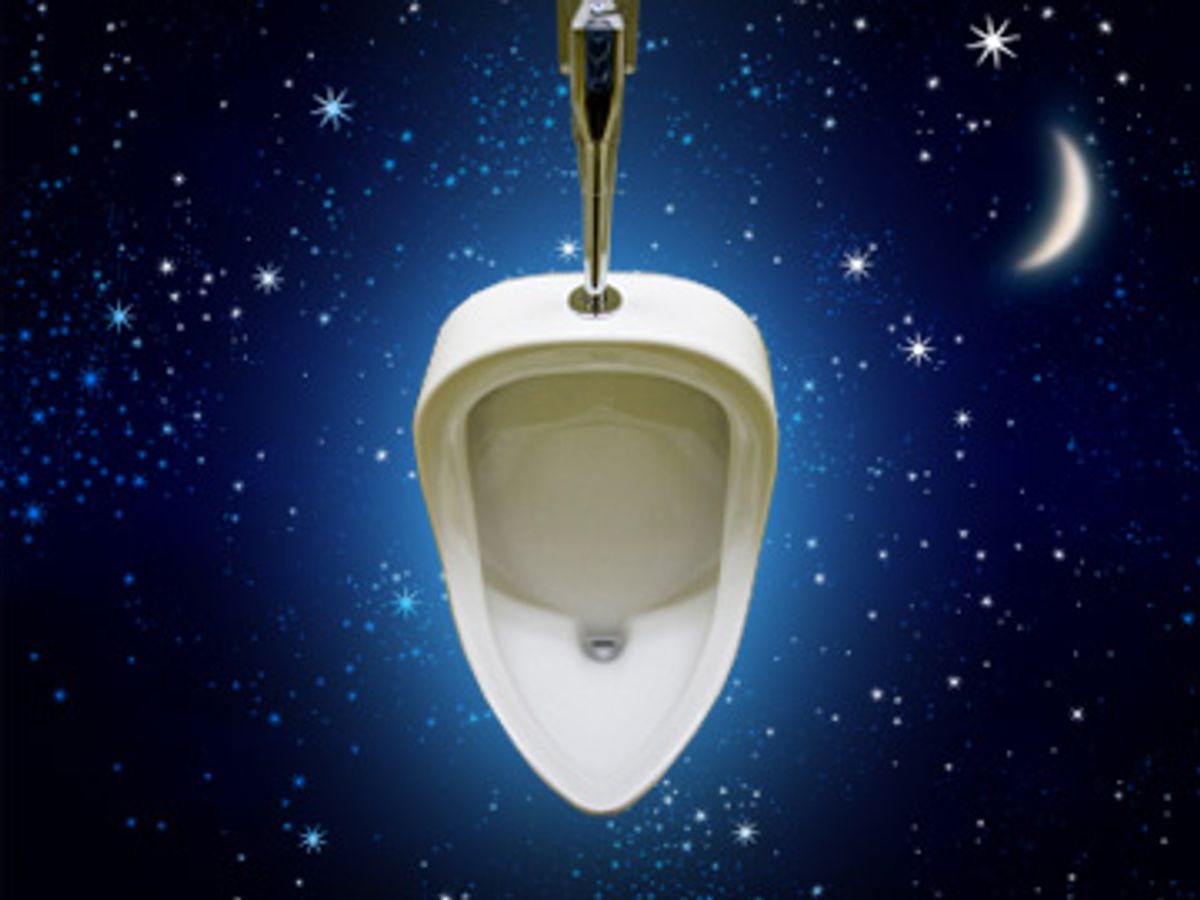 When my son was 3 years old he became obsessed with urinals. Ordinary toilets held no particular charm for him. But urinals -- well, that was another matter altogether. It made no difference where we went -- a supermarket, a restaurant, a library -- the first thing he had to do was run in and see the urinal. When we drove the three hours to New York to visit his grandmother he wanted to stop at every gas station on the Merritt Parkway. He was an early reader, so he could read the road signs that indicated how many miles it was to the next service island. I would look for an SUV and drive behind it to create a blind spot so he couldn't see the signs, but it never worked.

"Boo, we just stopped five minutes ago. Your bladder can't possibly fill up that fast."

I wanted to say, "No, you don't have to pee; you just want to see the urinal, and you know what, it's the same urinal as the one at the last gas station. I'm not stopping, Boo. I am not stopping." And I would have said this, but my wife thinks our son is a god, and so if he said he had to pee then we had to honor the signals his body was giving him.

I knew I couldn't win with her, so I told myself it was OK, this fixation of his. It was his way of achieving mastery over the world, of developing a sense of control. If I took the long view I would realize that what I was witnessing was the gradual refinement of his taste, that mechanism by which he paid attention to some things and ignored others. All kids had their obsessions. Their obsessions revealed something about their character. Exactly what my son's passion for urinals might foreshadow was beyond me, but I decided to go with it.

When my son was 4 years old we went to the Parker-Meridien in Manhattan for a friend's wedding. As we were standing in the lobby waiting to check in he asked me about the hotel's urinals.

"Yes, they probably do," he said. "Probably they do have urinals. Probably the urinals have pink deodorizing disks inside of white baskets over the drain. Probably they have a low urinal for kids and a high one for grown-ups."

"You're probably right," I said.

I was trying to teach him to say "I have to go to the bathroom" instead of "I have to pee." He was at that age when saying "I have to pee" was no longer considered cute. When we were in a restaurant and he blurted out, "I have to pee," everyone turned around and looked at us with disgust.

I thought of the trick my father used to get me to say "I have to make a B.M." instead of "I have to poop": He told me that's what the pro baseball players said. When Willie Mays or Hank Aaron went into the dugout and said, "I have to make a B.M.," there were no questions asked. Maybe if I could, in a similarly insidious way, link the phrase "I have to go to the bathroom" to one of my son's other passions -- say, for the music of Stereolab -- I could get him to change what he was saying. I could tell him that when the band members in Stereolab were in the recording studio they had an agreement: If one of them had to go to the bathroom they would say, "I have to go to the bathroom." They weren't allowed to use words like "poop" or "pee." Maybe that would work, I told myself.

"How can you say it differently?" I said.

"I have to go to the bathroom," he said.

As much as I wanted to believe that my son favored me over my wife, I knew this wasn't about me -- if he went to the bathroom with her he would lose this opportunity to see a high-class hotel urinal. And yet something stirred inside me anyway, that primitive desire to bond with him. I knelt down.

"Listen," I said. "There's a fancy museum not too far from here. They've got a really big bathroom. One whole wall is covered with urinals. There's probably like 50 urinals. The really tall kind that go all the way down to the floor. With automatic flushers. And the last time I was there do you know what color the disks were?"

But it was the flush that intrigued him most. Every urinal had its own particular flush. After he was done peeing he pulled up his pants, took two steps back, cupped his hands over his ears, and asked me to flush for him. He was very sensitive to sound and if the flush was loud he wanted to be prepared for it. Some urinals had very aggressive flushes. He asked me why that was and I told him that sometimes in commercial buildings they installed toilets and urinals that had bigger valves and bigger traps because they didn't want them getting clogged all the time.

"Right now you need to go to the bathroom with Mommy," I said. "Tomorrow I'll take you to the museum with all the urinals."

He stood up. He held my wife's hand and started toward the women's room. Then he stopped and turned back to me.

"I know," I said. "I'll keep my hand over the motion detector until you're ready."

Part of me understood my son's obsession. I grew up in Los Angeles and my family used to vacation in Ventura, an hour north of L.A. When we got to our hotel room the first thing I wanted to see was the bathroom. The bathrooms in the hotel seemed so exotic, so much more substantial than the bathroom at our house. Everything was big and gleaming white. The toilet. The tub. The sink. And then there was the bidet.

I had no idea what it was, and I'm not sure my father did either. I still remember the first time we stayed at La Ventura and he said he was going in to try it out, with all the gravity of someone who was preparing himself to wrestle with the devil. I remember him crouching over it after he had used it -- or after he had tried to use it -- explaining it to me. He told me you used it to wash out your backside after you made a B.M. This seemed complicated and unsanitary to me, but I didn't say anything. I spent the rest of that vacation staring at the bidet every chance I got, trying to unlock its secrets, coming away none the wiser.

So maybe my son had inherited it from me, this infatuation with bathrooms and their fixtures. Only maybe his tastes were more sophisticated than mine: It took something completely foreign like a bidet to capture my attention, whereas my son was able to walk into a public bathroom and immediately see what was extraordinary about urinals. It's a cliché that one of the rewards of having children is that they teach you to see the world anew again -- but it's not all of the world, just the parts they become fixated on. My son was making me remember something I had forgotten. That porcelain. That chrome. That perfect wedding of form and function. I realized Marcel Duchamp wasn't just commenting on what constituted art when he put a urinal on display in New York; he was unveiling the peculiar beauty of the urinal to the world.

My son is 7 now. He's recently become obsessed with Beethoven's piano sonatas, a more respectable passion, I suppose, but ultimately just as mysterious. Why Beethoven instead of Mozart? Why urinals instead of toilets? I don't know. And I don't care. As my son gets older what I value is his passion in and of itself -- the fact that he has the ability and the capacity to care deeply about something, to be fascinated by it, to want to understand it completely -- however arbitrary the object of his passion may sometimes seem. I have to value this; it's my only consolation now as we drive down the Merritt Parkway to visit grandma, passing gas stations that once elicited pleas, my son not saying a word, absorbed as he is in the piano sonata playing on the car stereo. I'm missing something I never thought I would miss, and as I watch this endless exchange of passions, passions that will someday take him away from me, passions that will someday bring him back, I try to take comfort in the fact that still, even now, when we go to the bathroom at a library or a restaurant or a gas station, he makes a beeline toward the urinal, then takes a step back, so he can fully appreciate it, so he can be filled with that sense of awe again, like a lover beholding his beloved, like an astronaut apprehending the moon.