Those darn Scandinavians lead the world in "life satisfaction" and super-expensive "nanny states." Could they get any more annoying? 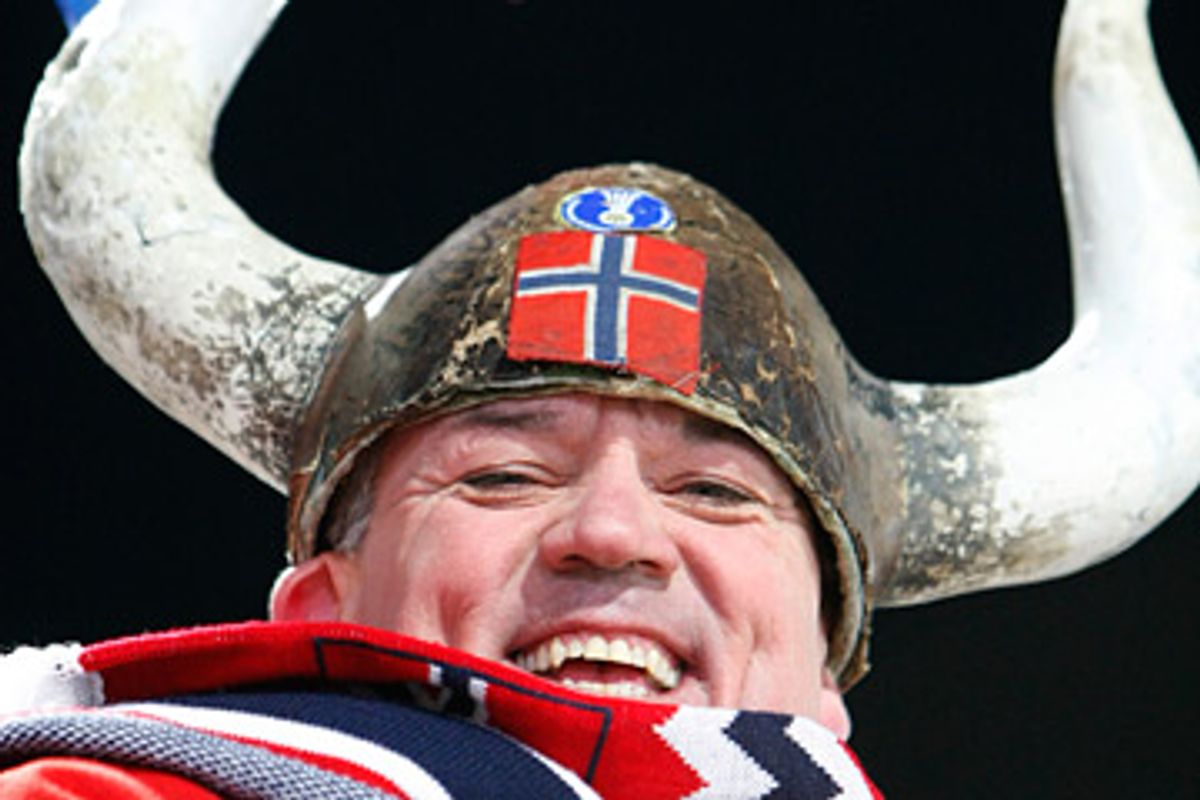 I am so tired of Scandinavian happiness.

Earlier this week, the New York Times gushed all over the awesomeness of Norway. While the rest of the world is falling down the rathole of economic doom, Norway is doing just fine.

With a quirky contrariness as deeply etched in the national character as the fjords carved into its rugged landscape, Norway has thrived by going its own way. When others splurged, it saved. When others sought to limit the role of government, Norway strengthened its cradle-to-grave welfare state.

And in the midst of the worst global downturn since the Depression, Norway's economy grew last year by just under 3 percent. The government enjoys a budget surplus of 11 percent and its ledger is entirely free of debt.

Damn you, Norway! The rest of us already have enough problems; the last thing we need to see is evidence proving that if we hadn't been such a pack of greedy, spendthrift, gambling dunderheads we would be sitting pretty in a beachside cottage overlooking the North Sea right now. Keep your good fortune to yourself, please. Nobody likes a showoff.

But it gets worse. The Organization for Economic Cooperation and Development has released a report asserting that Scandinavians in general exhibit the highest levels of "life satisfaction" in the world. (Which stands to reason, doesn't it? I mean, if I was waking up in Oslo and reviewing the daily headlines about events in the United States, I'd feel amazingly satisfied that I wasn't an American. Wouldn't you?)

Danes pay about two-thirds of their income in taxes. Why be so happy about that? It all comes down to what you get in return.

The Encyclopedia of the Nations notes that Denmark was one of the first countries in the world to establish efficient social services with the introduction of relief for the sick, unemployed and aged.

Oh just kill me now. How many times do we need to go over this? Is it really all that hard for small, mostly culturally and racially homogeneous nations, some of which are endowed with disproportionate access to valuable natural resources (I'm looking at you Norway!) to get majority buy-in from their populations for extensive social welfare systems? In the U.S. it ain't so easy. Our class disparities and social diversity make it far harder to reach the kind of widespread consensus that comes so easily to Swedes and Danes and Norwegians. And I'm not just talking about the evil racist nonsense spread by the likes of Rush Limbaugh, who wants us to believe that higher taxes pushed by the Obama administration are really a sneaky form of "forced reparations." Right here where I live, in Berkeley, Calif., the diversity of race, religion, class and culture is phenomenal. Getting everyone to agree on anything is monumentally arduous.

Although, that being said, in Berkeley, every time we head to the ballot box, we do seem pretty willing to vote for measures that, one way or another, will increase our taxes -- especially if it means money will go to local schools or libraries or social services. That's how Berkeley rolls -- if there were more snow, fjords and white people, you could be excused for mistaking us for a small Scandinavian country. Heck, before everyone started driving Priuses, the Volvo-per-capita distribution was higher than Stockholm's. (OK, I made that up.)

Are we happier in Berkeley? I dunno -- there sure seem to be a lot of grouches at my local grocery store. But are we self-satisfied?

And I, for one, am about to self-satisfy myself at the ballot box, yet again, when I troop down to my local polling place next Tuesday to express my opinion on a half dozen initiatives meant to slap a bandaid on the state's woeful finances. I'm not sure how I will vote on all of them -- I am highly skeptical of "temporarily" diverting funds meant for children and mental health services "to achieve General Fund budgetary savings." But I have no doubt that I will vote yes on Measure 1B, which will force the state to make supplementary payments to schools and community colleges. Even if it means raising my taxes. That would make me happy.

I don't mind paying higher taxes if it means supporting education in California. Just as I wouldn't mind paying higher taxes if it meant getting a decent healthcare system or expanded unemployment benefits. I don't know if Kostigen is correct to argue that Scandinavian happiness is correlated with higher taxes, but I'm sure he's on the money when he observes that "taxes in the U.S. have taken on a pejorative association because, well, we are never really quite sure of what we get in return for paying them, other than the world's biggest military."

And bailouts. Lots of bailouts.

Which don't make us happy.

I am reasonably confident that an Obama administration would do its best to steer increased tax revenues toward socially desirable ends that the majority of the country supports. I'm even willing to bet that should he succeed in doing so, we'd be a happier nation. The tea-partiers will be upset, but come on, those guys are just whiners.

Will we ever be as happy as the giddy Vikings? I doubt it, no matter how high our taxes go. One of the byproducts of diversity is that there's always going to be someone complaining about something. Do we really want it any other way?

Globalization How The World Works Taxes