It's nerd love at first sight for Jennifer Aniston and Steve Zahn in this aggressively quirky romance. 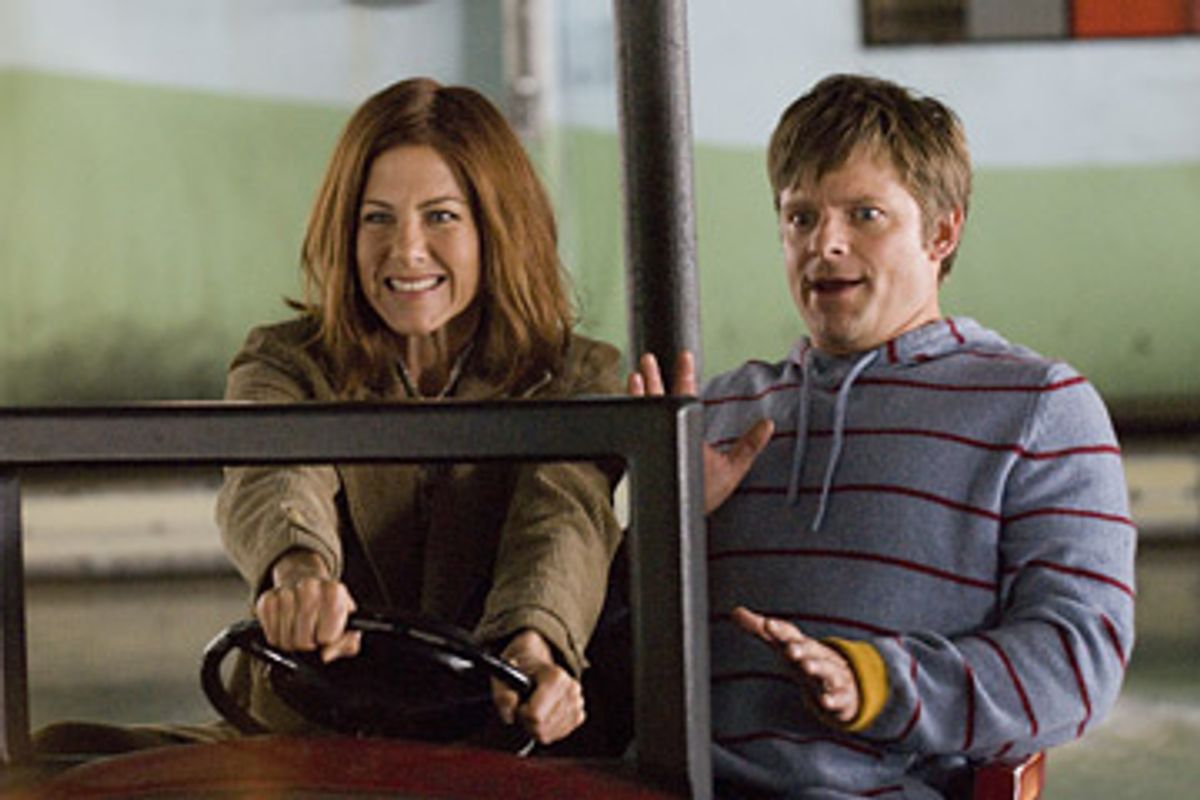 In Stephen Belber's romantic comedy "Management," Mike (played by Steve Zahn), a socially awkward, no-longer-so-young man who helps run his parents' small-town Arizona motel and can't help wanting more out of life, woos the sharp-edged but equally lonely Sue (Jennifer Aniston) with words along these lines: "You're really nice and sweet, beneath ..." He doesn't finish the sentence, until Sue urges him to: "Beneath the part of you that's not."

At that moment, which occurs fairly early on in "Management," there's still some hope for the picture: It would have been enough for Belber (in his directorial debut; he also wrote the script) to explore a burgeoning romance between two people, one who's perhaps too sweet for his own good, the other whose prickliness -- her quality of "not being nice" -- is actually hiding a quiet but deep kind of generosity. Belber has a cast of fine actors to work with here: Margo Martindale and Fred Ward appear in supporting roles, as Mike's parents. And Zahn and Aniston have a nice, staticky chemistry going in the movie's early scenes. Zahn is a wonderful and often unappreciated actor, and at the beginning of "Management" he makes us see Mike's vulnerability, without coming off as overly pathetic. And Aniston, who tends to give better performances in smaller movies than in big-budget, mainstream ones (she's also an executive producer of this picture), in return offers a kind of cautious, crackly warmth.

But even though Mike and Sue are the central figures of "Management," they end up getting lost in it. The movie begins as a jittery romance: The two meet when Sue, a no-nonsense working woman who sells "corporate art" (paintings of fox hunts and the like) for a company based in Baltimore, checks into Mike's parents' motel. We've previously seen Mike, a lonely, somewhat schleppy sort, puttering around the motel doing his various chores, and driving to a strip mall to eat lunch alone at a Chinese restaurant. He's smitten with Sue at first sight, and so he shows up at her room that evening with a bottle of wine, which he assures her is a perk that the motel offers all the guests. (We know that he's just fetched it from the storage room, hastily removing the shiny Christmas bow from its neck before regifting.) Sue is bewildered and a little annoyed, but we can see -- as she can't -- that Mike is desperate to make a new life for himself, and she seems to represent his last chance. Even though what Mike does after that first meeting probably qualifies as stalking, Sue begins to respond to his shy but forthright kindness.

But Belber doesn't seem to trust his instincts enough to let these two potential lovers just be. After a reasonably promising start, "Management" quickly devolves into an aggressively quirky exercise. Woody Harrelson shows up as an ex-punk yogurt mogul with a hot temper; his character seems to exist just to fill the movie's funny-crazy person quota. James Liao plays Al, a friendly stoner who befriends Mike after he treks to Seattle in pursuit of Sue and ends up homeless and jobless. Together the two cook up silly schemes, like going to Sue's house, uninvited, and parking themselves in her yard so Mike can woo her with a warbly, off-key version of "Feel Like Makin' Love."

By this point, Mike's cheerful naif routine has already worn thin, and Zahn, as skillful as he is, can't do anything to salvage it. Aniston, too, ultimately seems ground down by the movie's shenanigans, and there are long stretches of the picture in which she isn't even around. "Management" is ultimately undone by its own bland idiosyncrasies. It's nothing but a mismanaged opportunity.