After the invasion of Iraq, Gen. Geoffrey Miller told the Iraq Survey Group they were "running a country club" and needed to get tough on prisoners. 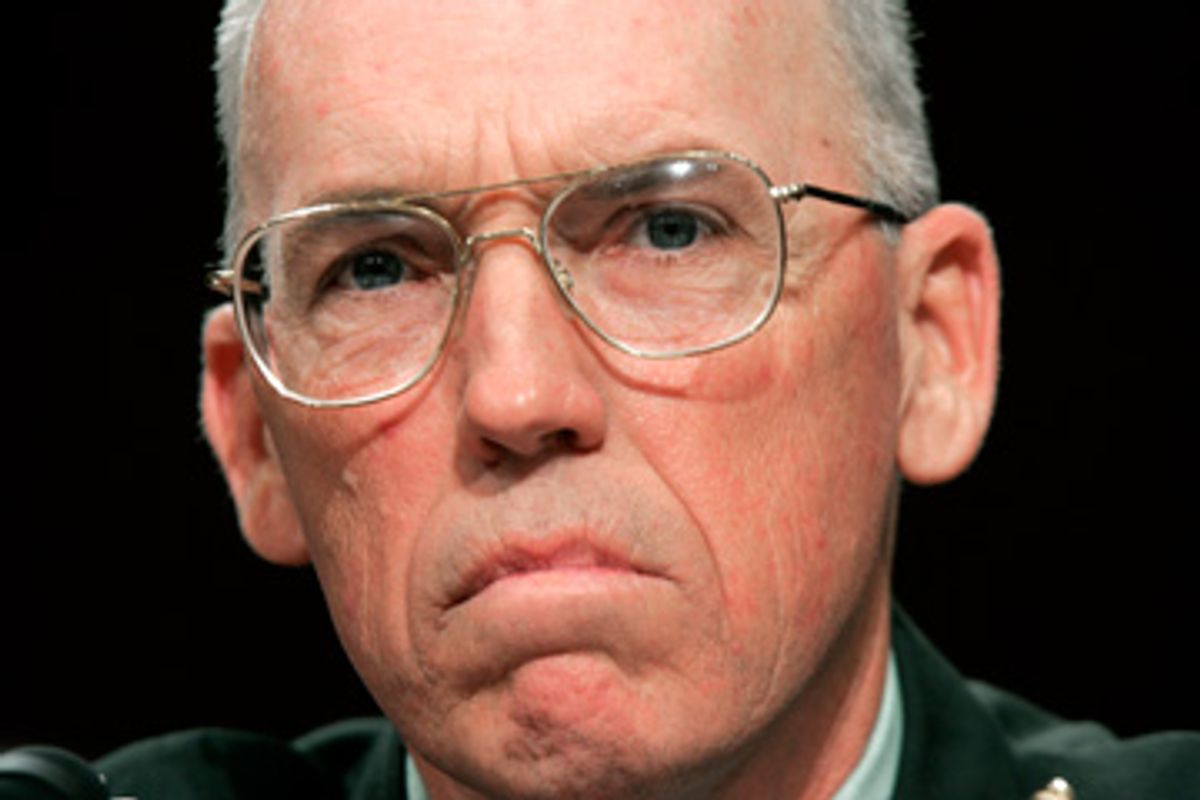 It’s one thing if, as former Vice President Dick Cheney keeps saying, the United States brutally interrogated people to keep our kids safe from another strike by Osama bin Laden. If folks got tortured to provide a rationale for going to war with Iraq, though, that's a whole different story.

Recent news reports have suggested the possibility that the Bush administration might have endorsed torture to prove an Iraq-al Qaida link. And a recent report from the Senate Armed Services Committee shows that months after then-President Bush had declared Mission Accomplished in Iraq, an Army general working hand in glove with top administration officials tried, albeit unsuccessfully, to convince a unit charged with finding weapons of mass destruction to get tough on its prisoners.

In August and early September of 2003, Maj. Gen. Geoffrey Miller, the man in charge of the Pentagon’s torture laboratory at Guantanamo Bay, was dispatched to Iraq, allegedly to Gitmoize operations there.

It seems to have worked, at least in one place. Soon after Miller visited with officials in charge of Abu Ghraib, guards there began to use working dogs, stress positions, extremely lengthy interrogations, isolation, yelling and nudity in order to try to wring information from prisoners -- all techniques that had been used at Guantanamo and that the world would later see in photos released from an investigation in to what had gone on at the prison.

But according to the Senate committee's report, before Miller met with the Abu Ghraib officials, he first made a little-known visit to the Iraq Survey Group, which was in charge of the hunt for WMDs in Iraq after the invasion.

Miller also told the ISG’s Maj. Gen. Keith Dayton that Dayton’s unit was “not getting much out of these people,” and complained that the ISG had not “broken” their detainees psychologically. Miller offered to send along suggested techniques, Dayton recalled, that would “actually break” the prisoners.

Dayton demurred, saying his unit wasn’t changing anything and that lawyers would have to carefully vet anything Miller suggested. The ISG generally balked. One of its debriefers threatened to resign if Miller got his way. After the cool reception, Miller appears to have dropped the effort with respect to the ISG.

When interviewed by the committee, Miller couldn’t remember much about that visit. But in retrospect, it is pretty clear why the ISG wasn’t “getting much” out of their detainees on WMDs in Iraq: There weren’t any. Though with enough abuse, the detainees probably would have claimed otherwise.