The director of "Irma Vep" offers a wistful portrait of a family struggling to let go of their late mother's belongings -- and the mysteries they contain. 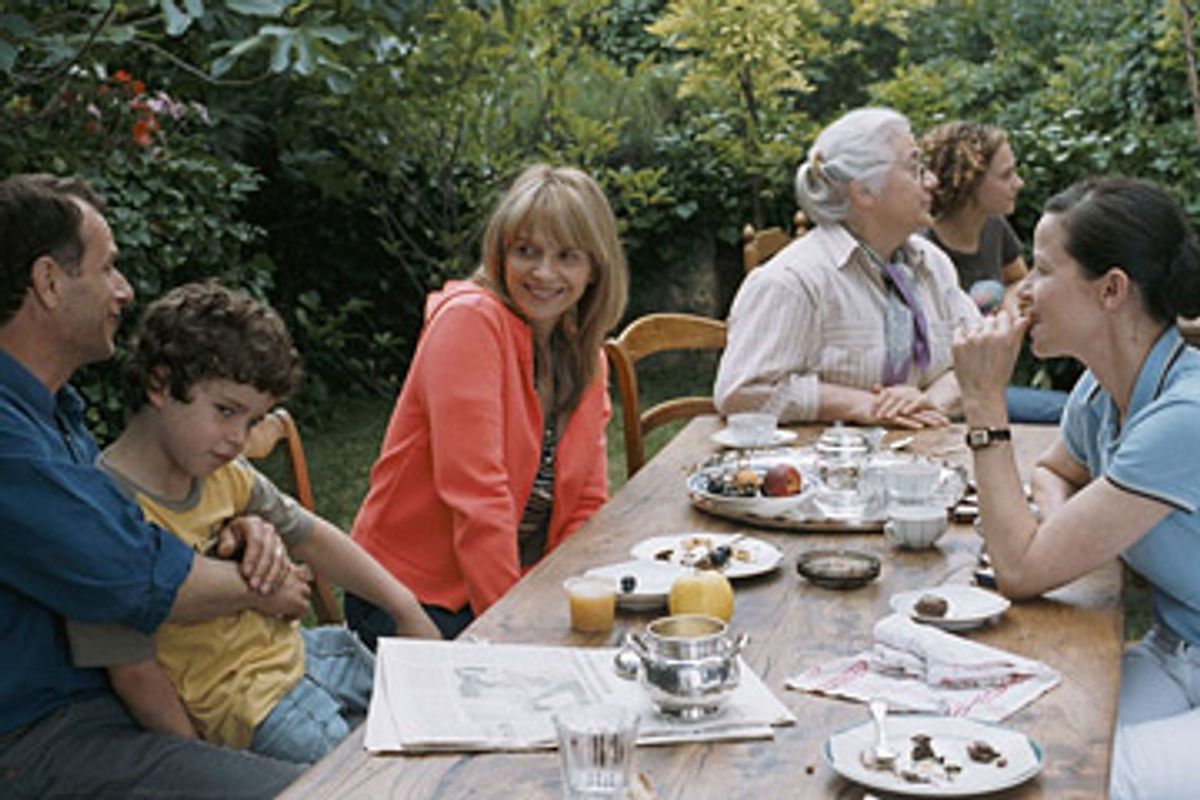 Olivier Assayas is the kind of filmmaker who's interested in so many things, who follows so many trails, that it would hardly be possible for him to make the same movie twice. But of all the movies the versatile French director has made -- from the tauntingly provocative thriller "Boarding Gate," to his meditation on the obsessive nature of filmmaking and film watching, "Irma Vep" -- his latest, "Summer Hours," is undoubtedly the most wistful. The whole movie is like that last sliver of sunlight on a late-summer day, a slice of gold that you can't hang onto forever, as much as you wish you could. Even the image flickering behind the movie's opening-credit sequence is a token from a time long past: It's a faded but vivid vignette of a house nestled amid the flowers and the greenery of the French countryside, a pretty-as-a-postcard vision from another century.

Yet "Summer Hours" takes place solidly in the present. The house we've just seen in the credits isn't just a nostalgic image but a real home, a structure that has been defined over the years less by the wood and stone and plaster it's made of than by the life inside it. The house belongs to Hélène, a woman somewhere in her 70s. (She's played by Edith Scob, an actress who radiates dignity, and who, as a young woman, played the disfigured daughter in Georges Franju's chilly "Eyes Without a Face.") Hélène has three children and numerous grandchildren, but although it's clear she loves them, she's not the kind of woman who thinks of her children as her "life's work." Throughout her adult life, she's devoted most of her energy to preserving the legacy of her uncle, an impressionist painter named Paul Berthier. She was devoted to him when he was alive, and may, it turns out, have had a romantic relationship with him. This house originally belonged to him; she lives in it now, years after his death, surrounded by his furnishings and belongings -- though, perhaps tellingly, not by his artwork. Paul Berthier is an unseen presence in the movie, a ghost -- it's as if the fact of his once having lived is more significant than whatever paintings he might have left behind.

Hélène's children dutifully come to see her in the summer -- their children run and play around the grounds, temporarily reinvigorating them with noisy life -- and the movie opens during one of these visits. There's Adrienne (Juliette Binoche), a jet-setter who lives in the States, where she designs upscale home accessories. Of all Hélène's offspring, she's the one who best understands the power and beauty of objects. It's as if the shape and feel of certain items she's always known in her mother's house -- a silver tray in the shape of a lily pad, a Georg Jensen teapot -- have seeped into her very being. Jérémie (Jérémie Renier) is a businessman who lives in China with his wife and children; he's involved in the production of Puma sneakers, and at one point Adrienne taunts him, not necessarily in fun, about the ultimate meaninglessness of devoting one's life to the mass production of cheap shoes. And Frédéric (Charles Berling), the eldest, is an economist, responsible and solid. Of all the siblings, he's the one most devoted to the idea of preserving everything Hélène has valued in her life. The house is filled with furniture and objects by important designers, things that curators from the Musée d'Orsay have long had their eyes on, and two paintings by Corot have pride of place in the house. When Hélène takes Frédéric aside and explains how the estate should be liquidated when she dies, Frédéric demurs. He can't imagine selling or disposing of the house or any of its contents. To do so would be to sever a crucial link with the past, and he's sure he can't bring himself to do it.

But Hélène knows better, and after her death (which occurs early in the movie), she's proven right. "Summer Hours" isn't so much about how the siblings deal with the loss of their mother as it is about how they grapple with the meaning of all the things she's left behind. This is an end-of-an-era movie, the story of how a family learns to let go of the physical possessions that have, in some ways, helped define their familial identity. Olivier -- who also wrote the script -- has referred to "Summer Hours" as his version of "The Cherry Orchard," and the comparison is apt. This isn't a story about siblings squabbling over an estate, although painful disagreements do arise. Frédéric, in particular, suffers because he's so attached to those Corots: They speak to him, somehow, just as those beautifully executed teapots and trays speak to Adrienne. They're also quintessentially French, but they're part of a France that Frédéric feels is rapidly vanishing. His siblings no longer live there, and visit only infrequently. His fondness for those Corots seems to represent a deep-rooted love of country, something that he doesn't quite know how to express, and probably doesn't even know he feels.

Hélène's possessions, most of them redolent of her attachment to her uncle, also represent secrets about her that her children will never fully understand. Did she have a romantic relationship with Paul Berthier? That idea disturbs and intrigues the children to varying degrees, and their exploration of the possibilities exposes the truth that it's often hard to see our parents as people, sometimes even after they've left us.

"Summer Hours" was originally conceived as part of a series of short films commissioned by the Musée d'Orsay for its 20th anniversary celebration. (Hou Hsiao-hsien's wonderful "Flight of the Red Balloon" began its life as part of the same series, which was ultimately scrapped.) And while the movie is, in part, about the beauty and power of objects, it's also about the way the things around us, divorced from the life of their surroundings, can end up meaning nothing. Assayas shows us Hélène's special writing desk, sitting forlornly in the Musée d' Orsay after her death. It's a beautifully crafted piece of furniture, and yet without its usual mess of papers and gewgaws, it looks dead and ordinary.

Olivier captures the essence of what objects can mean in one lovely sequence: Frédéric urges Hélène's longtime housekeeper, Éloïse (Isabelle Sadoyan), who's practically a member of the family, to select an item from the house as a remembrance. She chooses the one item she really doesn't like (not knowing that it's an extremely rare vase) because she doesn't want to take anything of real value. Yet she's pleased with the vase, remarking that she can put flowers in it and think of her old friend.

And with that scene, Assayas captures the essence of what it means to keep history alive inside us: What matters more than the vase itself is the life you put inside it. Even the look of "Summer Hours," shot in rich but muted tones by Eric Gautier, asserts that the dusty old past must give way to the urgency of life. The only way to hang onto the past is to let it go: That's an elusive, paradoxical, frightening idea, but Assayas somehow makes it feel concrete, even comforting. The magic of "Summer Hours" is that even in its elusiveness, it gives us something to hang onto.