Why is the president suddenly so afraid of a single-payer solution to America's healthcare crisis? 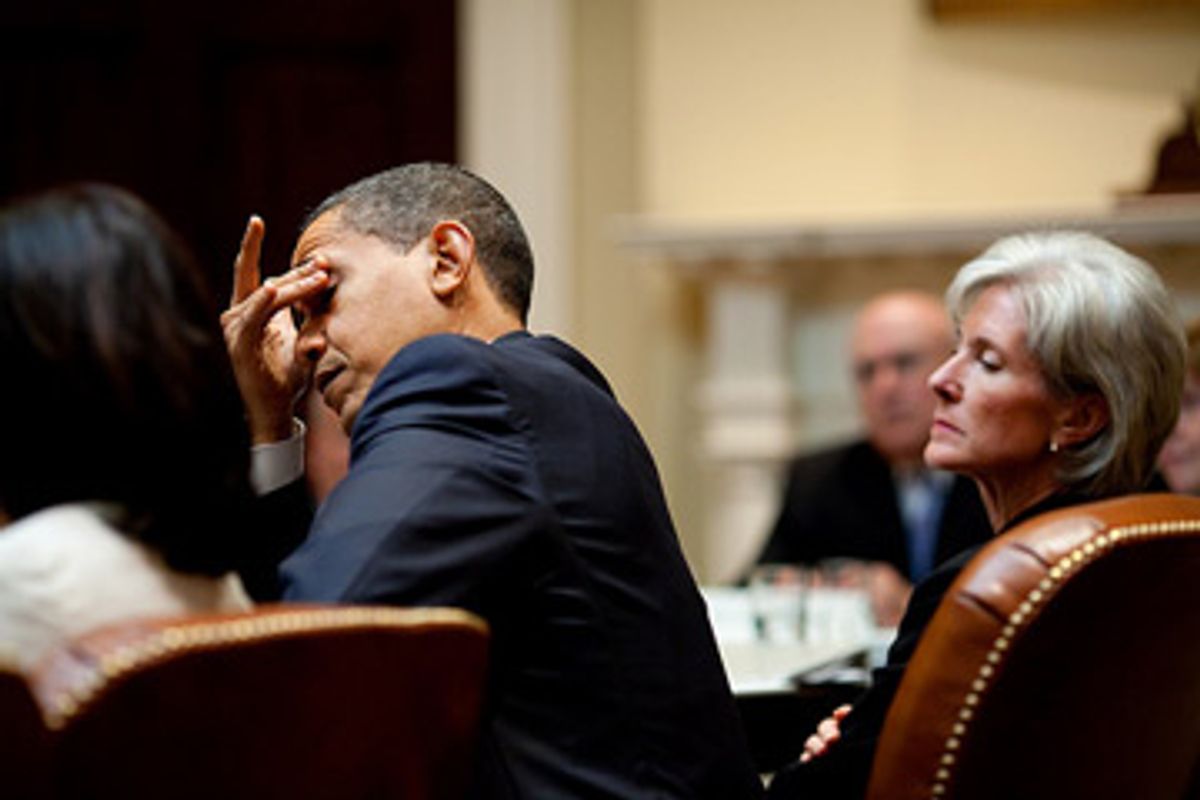 The most stunning and least reported news about President Barack Obama's press conference with health industry executives this week wasn't those executives' willingness to negotiate with a Democrat. It was that Democrat's eagerness to involve those executives in a discussion about healthcare reform even as they revealed their previous plans to pilfer $2 trillion from Americans.

That was the little-noticed message from the made-for-TV spectacle that administration officials called a healthcare "game changer": In saying they can voluntarily slash $200 billion a year off the country's medical bills over the next decade and still preserve their profits, healthcare companies implicitly acknowledged they were plotting to fleece consumers and have been fleecing them for years. With that acknowledgment came the tacit admission that the industry's business is based not on respectable returns, but on grotesque profiteering and waste -- the kind that can give up $2 trillion and still guarantee huge margins.

Chief among the profiteers at the White House event were insurance companies, which have raised premiums by 119 percent since 1999, and one obvious question is why -- why would Obama engage those particular thieves?

It's a difficult query to answer, because Obama is a healthcare mystery, struggling to muster consistent positions on the issue.

Listening to a 2003 Obama speech, it's hard to believe he has become such an enigma. Back then, he declared himself "a proponent of a single-payer universal healthcare program" -- that is, one eliminating private insurers and their overhead costs by having government finance healthcare. Obama’s position was as controversial then as it is today -- which is to say, controversial among political elites, but not among the general public. ABC's 2003 poll showed almost two-thirds of Americans desiring a single-payer system "run by the government and financed by taxpayers," just as CBS's 2009 poll shows roughly the same percentage today.

That might explain why, when Illinois contemplated a 2004 healthcare proposal raising insurance lobbyists' "fears that it would result in a single-payer system," those lobbyists "found a sympathetic ear in Obama, who amended (read: gutted) the bill more to their liking," according to the Boston Globe. Maybe Obama didn't think single-payer healthcare was achievable without a Democratic Washington. And when in a 2006 interview he told me he was "not convinced that [single-payer healthcare] is the best way to achieve universal healthcare," perhaps he was following the same rationale, considering his insistence that he must "take into account what is possible."

Of course, even as a senator aiming for the "possible" in a Republican Congress, Obama promised to never "shy away from a debate about single payer." And after the 2008 election fulfilled his precondition of Democratic dominance, it was only logical to expect him to initiate that debate.

That's why the White House's current posture is so puzzling. As the Associated Press reports, Obama aides are trying to squelch any single-payer discussion, deploying their healthcare point-person, Sen. Max Baucus, D-Mont., to announce that "everything is on the table with the single exception of single-payer."

So it's back to why -- why Obama's insurance-industry-coddling inconsistency? Is it a pol's payback for campaign cash? Is it an overly cautious lawmaker's paralysis? Is it a conciliator's desire to appease powerful interests? Or is it something else?

For a president who spends so much time on camera answering questions, those have become the biggest unanswered questions of all.