Randall Terry is no match for Obama

The man who destroyed the antiabortion movement with his extremism is trying to use the president's visit to Notre Dame to advance his cause, but he will fail -- again. 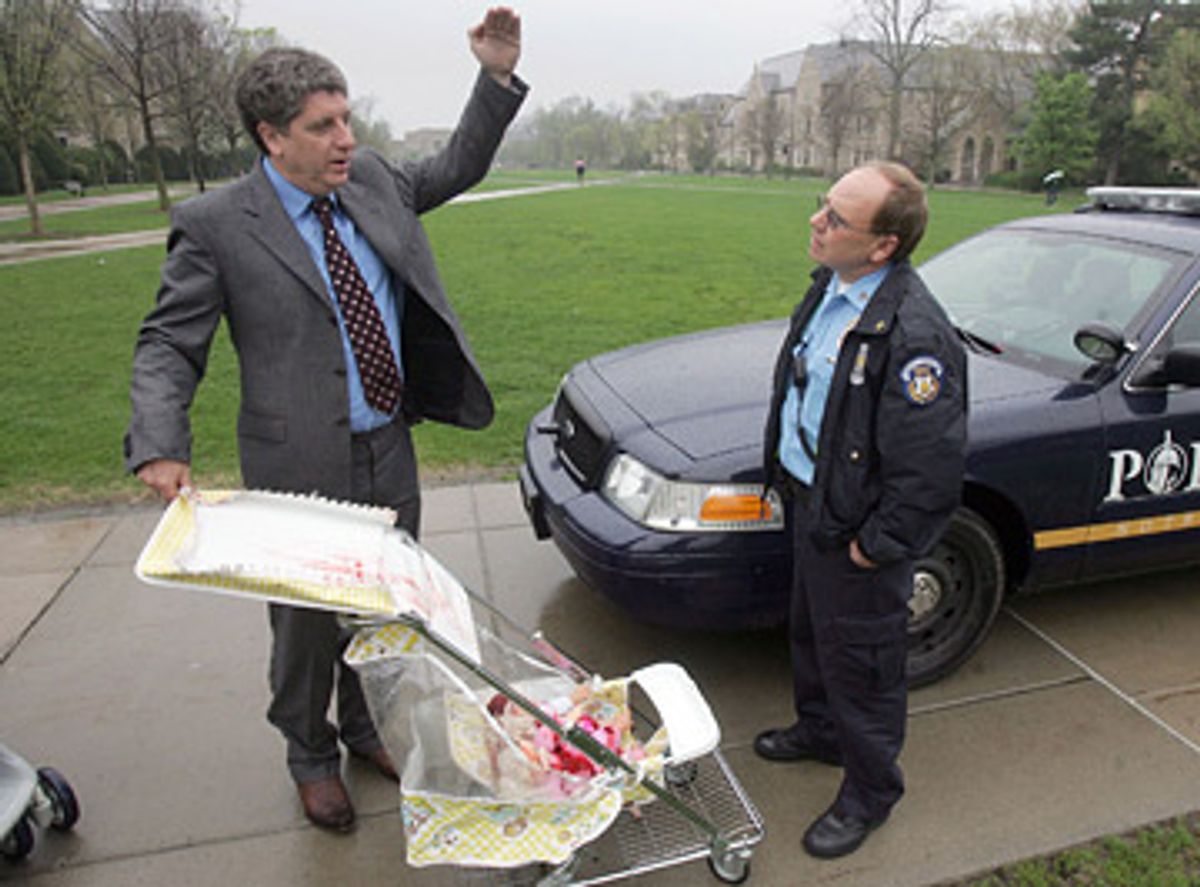 Randall Terry, the aging warrior of Operation Rescue, is now leading the charge against the University of Notre Dame for inviting President Obama to deliver its commencement address on Sunday, and for awarding him an honorary doctorate. Terry has been damaging the antiabortion cause for the last 25 years, and his Obama protest will likewise fall flat.

The Operation Rescue zealot turned off a lot of working-class people who were nervous about whether abortion might have become "too easy" years back, by unleashing a few thousand die-hards who began chaining themselves to clinic doors and barging into operating rooms in the '70s to "save the babies." The idea that anything goes in fighting abortion died along with five abortion providers and one clinic escort shot to death between 1993 and 1998. Unapologetic, Terry recently converted to Catholicism, and was arrested at Notre Dame walking around with a stroller occupied by a baby doll covered in blood.

Now Terry, Alan Keyes and other Catholic extremists will besiege Notre Dame on Sunday, trying to get some press for their goal of making abortion illegal -- a position that has been abandoned by just about everyone in the antiabortion movement, and rejected by a majority of Catholics. Obama tossed the final shovelful of sand into their grave when he combined the "visionary" proposition that women are best suited to make the decision about what to do when they get pregnant, with the pragmatic goal of making the abortion decision less necessary. That's change many progressive, pro-life Catholics can believe in.

The Catholic bishops have taken an equally hard line on abortion, although one is not likely to see any of them wheeling baby buggies with Terry. Seventy-four of the nation's 300 bishops have publicly criticized Notre Dame for its invitation to Obama and it appears there will be no red or violet zuchetti interspersed with academic mortarboards and tams on the dais. What a shame that U.S. church officials are so single-minded on abortion that they cannot honor our president. It was Notre Dame's former president Ted Hesburgh who decried the bishops'  unyielding opposition to abortion, by noting that they were willing to see candidates for public office who agreed with the church's social agenda 95 percent of the time lose to those who only agreed with us on abortion.

Aside from the honor associated with receiving a president, one suspects that Notre Dame is following Hesburgh's lead, which resulted in nearly every president from Dwight Eisenhower forward speaking at Notre Dame. For so many years Catholic colleges fought to be seen as first-rate academic institutions, rather than sheltered environments for Catholic kids whose parents were afraid they'd "lose their faith" if they went to Columbia or Harvard. Now, not only do Catholic kids go to Harvard, non-Catholics go to Notre Dame and a healthy 50 percent of its faculty is non-Catholic. Given recent Vatican efforts to monitor the "loyalty" of Catholic faculty, it is less restrictive for open-minded Catholic academics to teach in secular universities.

Obama is not likely to mention any of this at Notre Dame. The man is smooth and disciplined. He will, I am sure, extol the Catholic social justice tradition and urge the graduates to commit to serving the poor. If he were to broach the issue, it would be in the terms he has used to win the support of the small percentage of Catholics who are progressive on the environment, antiwar and -death penalty, and deeply committed to eradicating poverty, but either uncomfortable with legal abortion or actively opposed. By stressing a long-standing Democratic Party commitment to preventing unintended pregnancy and supporting pregnant women who continue pregnancies under a new name -- "reducing the need for abortion" -- he got most of these Catholics to vote for him in 2008.

Still, Obama yoked the strongest possible feminist affirmation of the right to choose abortion to his message of abortion reduction -- and many pro-life Catholics voted for him anyway, a sign of how disgusted they were with the Republicans. At an April 29 press conference the president explained why he is pro-choice in terms that most feminists would applaud. "The reason I'm pro-choice is because I don't think women take [abortion] casually. I think they struggle with these decisions each and every day. And I think they are in a better position to make these decisions ultimately than members of Congress or the president of the United States." A feminist theologian might tweak the language, but the bottom line is that the president's theology is feminist. Women are moral adults and agents; they think about abortion in complex and thoughtful ways and they should be trusted to make the decision. The president has not waffled on abortion.

What remains to be articulated is a comparable, fully developed commitment to supporting women in their desire to avoid having to make the abortion decision. So far, the language used by the president and his staff is mushy. I am hoping that by the end of his first term -- which will coincide roughly with the 50th anniversary of the widespread introduction of the birth control pill -- the president will have made clear that our underlying attitude toward women's sexuality needs to change. Women have the same right to decide to have sex -- married or unmarried -- as they do to have an abortion. Implicitly his policy accepts that. He promises to provide financial support to women who choose to carry pregnancies to term. This week, studies showed that increasingly those are single women. I am waiting for the truly transformational announcement that Margaret Sanger was right -- women will only be free when they control their fertility.

Notre Dame is not likely to be the venue.