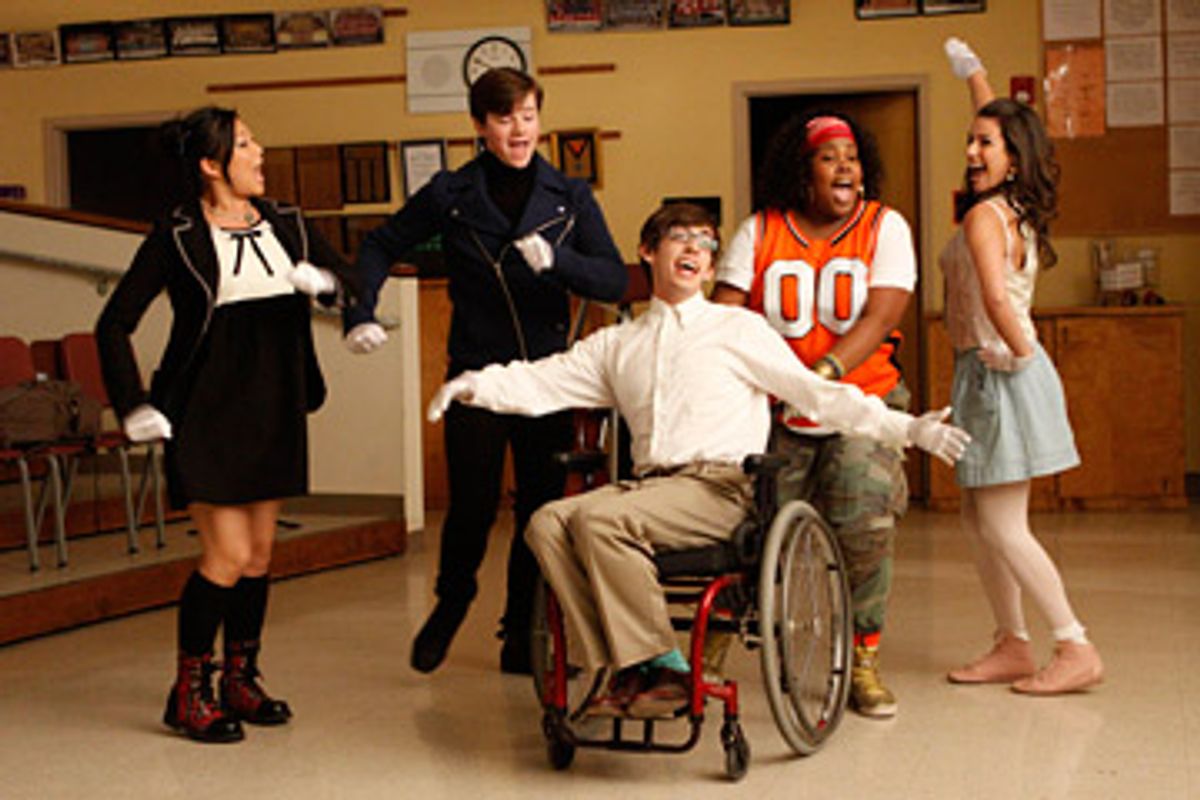 "There's nothing ironic about Glee Club!"

These are the passionate words of Rachel Berry (Lea Michele), the heroine of Fox's offbeat hour-long comedy "Glee." (A sneak preview episode airs after the final "American Idol" performances this Tuesday, May 19, at 9 p.m.; the series premieres this fall.)

Of course, the irony here is that there's nothing that's not ironic about Glee Club, both glee clubs in general and the specific Glee Club in question, from its casting a guy in a wheelchair to sing "Sit Down You're Rockin' the Boat" from "Guys and Dolls" to its prissily out-of-touch star Rachel, who claims that her schedule of taping performances and posting them to her MySpace page keeps her "way too busy to date."

But irony is just the carcinogenic Red No. 2 maraschino cherry on top of this toxically, hysterically, deliciously off-kilter sundae. For anyone who was ever wrapped up in the supreme competitive dorkiness of high school show choir and all of its attendant absurdities, for anyone who ever tolerated outsider, insider or in-betweener status in high school, for anyone who obeyed orders from a fascistic cheerleading coach or a gruff but distracted football coach, for anyone who enjoyed a gooey, five-part show-choir arrangement of a bad pop ballad in spite of themselves, "Glee" feels like a sinfully sweet, delightfully mean-spirited, adorably earnest indulgence.

Of course, it's impossible not to have mixed feelings about show choir, even when you're 17 years old and trapped by its queasy logic. The highs ­ -- singing and dancing to gloriously sappy, spirited or catchy show tunes onstage, in front of a big crowd ­ -- are so high for a teenager, but they're also constantly leavened by the lows ­ -- staying late after school to listen to an awful goody-two-shoes with a Disney princess voice sing her predictable rendition of "On My Own" from "Les Misérables" for the 18th time, just for example.  "Glee" creator Ryan Murphy ("Nip/Tuck") captures all of the hilariously trivial yet somehow earthshaking conflicts and contradictions of the experience so beautifully, with such perfect pitch, that I had to pinch myself several times throughout the show's first hour.

We begin with just the right leads: There's Rachel, the nerdy girl vocalist with the "Little Mermaid" voice who, despite her inherent repugnance, somehow captures our affections by the end of the pilot; and the object of her affection, Finn Hudson (Cory Monteith), the sweet but passive jock whose teammates cruelly refer to Glee Club as "Homo Explosion." (The group's real name, "New Directions," is almost as bad.)

Next, we have the soft-spoken teacher Will Schuester (Matthew Morrison), who would love to turn his Glee Club into a thing of beauty but finds himself up against an indifferent school principal, a scornful student body and rival show choirs with professional levels of talent. (Their over-the-top sugary rendition of Amy Winehouse's "Rehab" will feel like a particularly vivid traumatic flashback for anyone who's ever attended a show choir competition.)

On top of that, Will finds himself in hot water with his wife, Terry (Jessalyn Gilsig), who demands that he get a better job to help fund her expensive craft projects and Pottery Barn excursions. ("Don't go in the Christmas closet!" she warns him during one altercation.) While Terry's demanding ways keep Will from realizing his dreams, a sweet little redheaded nutritionist at school, Emma (Jayma Mays), is pining away for Will in secret --­ when she's not disinfecting everything in sight (she's germ phobic).

There's also the football coach, Ken Tanaka (Patrick Gallagher), who's less than helpful and supportive when it comes to recruiting members. ("I can't see any of my guys wanting to join Glee Club. Last month they held down one of their teammates and shaved off his eyebrows, just because he watched 'Grey's Anatomy.'") But my favorite character of all is the ever-brilliant Jane Lynch as the tyrannical yet smug cheerleading coach who wields power because of her team's past successes. ("Well, I have a phoner in a couple minutes, that's an interview on the telephone with a major media outlet," she condescendingly informs the teachers and coaches in her midst.)

Instead of taking on a big, obvious target like high school show choir and going for the most obvious punch lines, "Glee" draws on a head-spinning range of influences in order to do justice to its subject. The show combines elements of "High School Musical" with Alexander Payne's brilliant dark comedy "Election," plus a heady dose of "Rushmore," "Arrested Development," "Freaks and Geeks" and "Office Space" thrown in for good measure. Its wry take on American suburban life is understated but over the top, ironic but sincere, giddily funny but heartfelt, sweet but nasty.

By the time the first episode wraps up with a head-spinning rendition of Journey's "Don't Stop Believin'," which the club performs in order to demand respect from its detractors, "Glee" will have your heart in its gloriously kitschy clutches -- or should I say, jazz hands? Former show choir geeks, Broadway show tunes crooners, "American Idol" fans, cheerleading masochists and pretty much anyone who remembers the merciless absurdities of high school life a little more vividly than they'd like to will savor this very clever, very original new comedy.