Libertarians and conservatives react to the latest undramatic report on the trust fund's health by marshalling frightening, meaningless numbers. 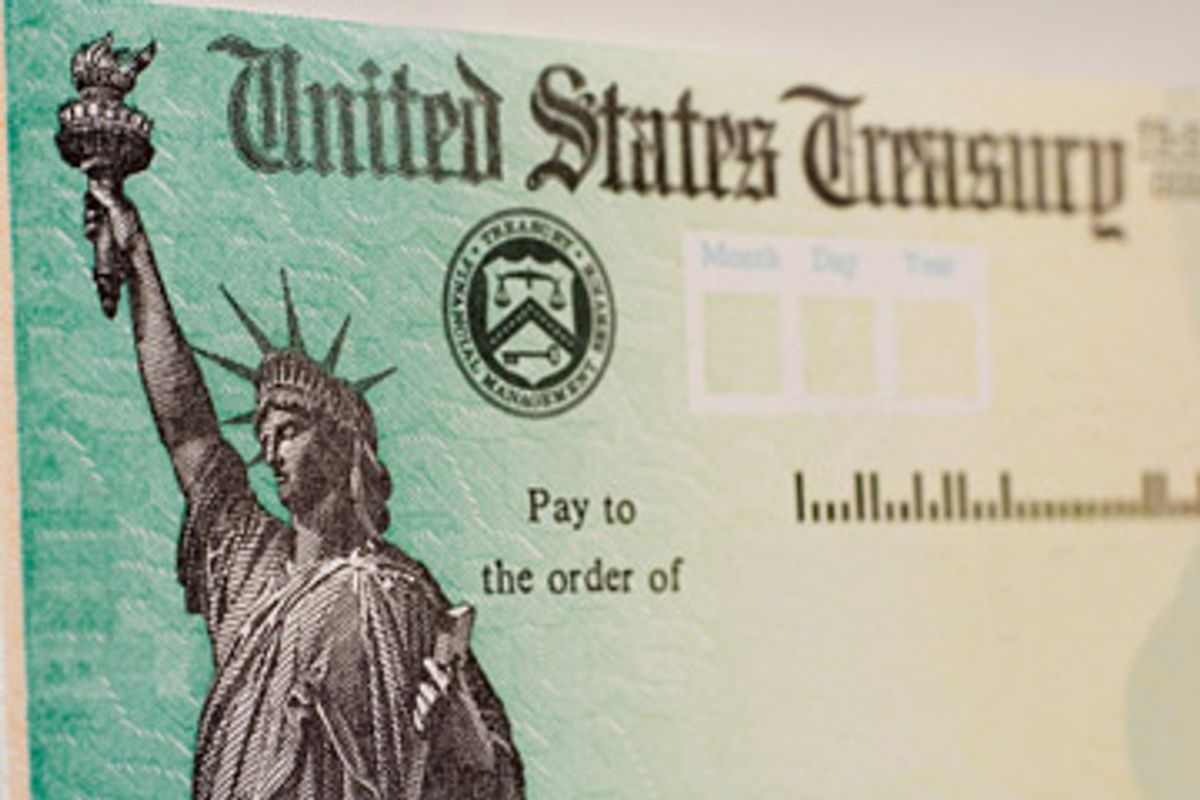 Last Tuesday, just before the release of the annual Social Security trustees report, I predicted that no matter what the report contained the perennial enemies of America's most effective and efficient universal social insurance program would cite it as proof that Social Security needs to be means-tested, privatized or both. The report is in, and its contents are far from dramatic. The (dubiously) estimated date at which, absent changes, the trust fund dries up and Social Security shifts to a pay-as-you-go program paying most, but not all, promised benefits has moved up slightly from 2041 to 2037. But to listen to the critics of Social Security on the right you would think that Godzilla was blocks away from the Fulton Fish Market.

Posting at the libertarian Cato Institute's Cato@Liberty blog, Michael Tanner claims to be alarmed that Social Security's "unfunded liabilities -- the amount it has paid beyond what it can actually pay -- now total $17.5 trillion. Yes, that's trillion with a 'T.' That's $1.7 trillion worse than last year."

Is the government really going to have to come up with $17.5 trillion in the next year or two to pay for Social Security, as more baby boomers retire? Undoubtedly that is what some opponents of Social Security want to frighten their fellow Americans into thinking. What Tanner neglects to tell his readers is that this big, scary number purports to measure Social Security's unfunded liabilities over an infinite time horizon and assumes there are no changes made between now and eternity. Any number of relatively minor changes, from lifting the cap on the Social Security payroll tax to infusing general revenues, could preserve the program in its present form into the 22nd century without insolvency or harm to the U.S. economy.

The "unfunded liabilities" argument is misleading for another reason. It is only applied to programs that, like Social Security and Medicare, are paid for by a dedicated tax like a payroll tax. The projected gap between future revenues and future outlays from this special-purpose tax is the "unfunded liability." Why do we never hear of the "unfunded liabilities" of Pentagon spending -- the third of the big three spending programs (Social Security, Medicare, defense) that take up most of the federal budget? Defense spending comes out of general revenues, not a dedicated tax.

Suppose that in an alternate Rod Serling universe our other-dimensional twins paid for Pentagon spending on the basis of a dedicated national consumption tax, while they paid for Social Security and Medicare out of general taxation. In that case, opponents of Pentagon spending might have a field day denouncing the gap between the estimated federal consumption tax revenues in, oh, let's say, 2050 and the military threats they estimate that the U.S. will face in half a century. But in this "Twilight Zone" America, neither Social Security nor Medicare, lacking dedicated taxes, would have "unfunded liabilities" any more than the Pentagon does in our world.

Another deficit hawk pressure group that has been campaigning for cuts in Social Security for years, the Concord Coalition, chaired by Pete Peterson, issued a press release that expressed predictable alarm at the results of the trustees' report. Robert L. Bixby, executive director of the Concord Coalition, trotted out the bogus "intergenerational equity" argument that somehow today's retirees are robbing their children and grandchildren by burdening them with crippling debts to pay: "Today's report documents a failure of generational stewardship. We should not be content that Social Security and Medicare are affordable for today's beneficiaries when they are not sustainable for future generations." Note that Bixby, like many deficit hawks, lumps Social Security together with Medicare. Given the good shape that Social Security is in for generations to come, it is hard to raise alarms about it without treating it as part of a larger "entitlement" problem.

The "generational equity" theme is used by opponents of Social Security to imply that future generations will stagger under the burden of paying taxes for Social Security alone (and not just in conjunction with Medicare). But according to the trustees, even when the trust fund runs out (in 2037 or 2041 or whenever) and Social Security becomes a pure pay-as-you-go system, in which working-age Americans finance retirees, Social Security minus other changes would pay about three-quarters of what it owes. Lifting the cap on the amount of income subject to the payroll tax would eliminate that problem forever. So would an extra 1 or 2 percent of GDP decades from now, obtained by diverting revenues from other programs, like a more modest defense budget, or raising new revenues -- say, from a modest national consumption tax. Whether the new revenue came from a payroll tax without a cap, diverted revenues or new taxes, the burden would fall disproportionately on the affluent, who overall will be much more affluent half a century from now, assuming even low economic growth. In other words, the contract between elderly Americans and the rest can be honored in half a century by slightly higher taxes that would fall chiefly on much richer Americans in a much richer America.

As I noted last week, more than a quarter of a century ago in 1983 the Heritage Foundation's Stuart Butler and Peter Germanis published a manifesto titled "Achieving a 'Leninist' Strategy," in which they called for a "Leninist" campaign to convince Americans to support the destruction of Social Security: "The business community, and financial institutions in particular, would be an obvious element in this constituency. Not only does business have a great deal to gain from a reform effort designed to stimulate private savings, but it also has the power to be politically influential and to be instrumental in mounting a public education campaign."

In apparent furtherance of that Leninist "public education campaign," following the issuance of the Social Security trustees report Butler published an Op-Ed in the conservative Washington Times arguing that the costs of the current bailouts are nothing, compared to "the looming fiscal tsunami due to wash over us as baby boomers start retiring in ever-growing numbers and start claiming Social Security and Medicare benefits Congress has promised them. They are promises even the most robust economy could not afford to keep." Note that Butler, like Bixby, uses guilt by association to convict Social Security, by linking it with Medicare and Medicaid, whose costs are driven primarily not by the aging of the population but by cost inflation in America's mostly private medical industry.

Butler joins other deficit hawks in calling for a "bipartisan commission to recommend long-term changes in entitlement programs. Commission proposals would be sent to Congress for an up-or-down vote." Butler must be confident that the commission can be stacked with deficit hawks who agree with him. Otherwise why would he be afraid to allow our democratically elected officials to have a public debate about changes in America's two biggest social programs?

Butler suggests that the president and a bipartisan congressional commission should ask "the American people what to do. Then, say, a commission put together a package of reforms based on the people's mandate and sent it to Congress for a vote." This is a perfect description of "plebiscitary democracy," in which legislatures are overruled by supposed "mandates" from the people. Fortunately our system is one of representative democracy, in which we are governed by (more or less) accountable elected officials rather than by manipulative polls. Perhaps his professed role model Lenin's example inspired Butler's idea of claiming popular legitimacy for a commission to "reform" Social Security and Medicare that would be rammed through Congress without public debate or amendment, only an up or down vote. After all, Lenin and his co-conspirators, claiming to represent the "people," overthrew the fledgling democracy in post-Tsarist Russia, as part of the original "Leninist strategy."

In an America with much more pressing crises, it makes no sense for anybody who is not a libertarian to waste time worrying about the state of Social Security decades in the future. If ever a can deserved to be kicked down the road, it is this one.