Her controversial cardigans! Her bare arms! As a feminist, I cringe at the constant media attention to our first lady's appearance. But that doesn't mean I can't enjoy it. 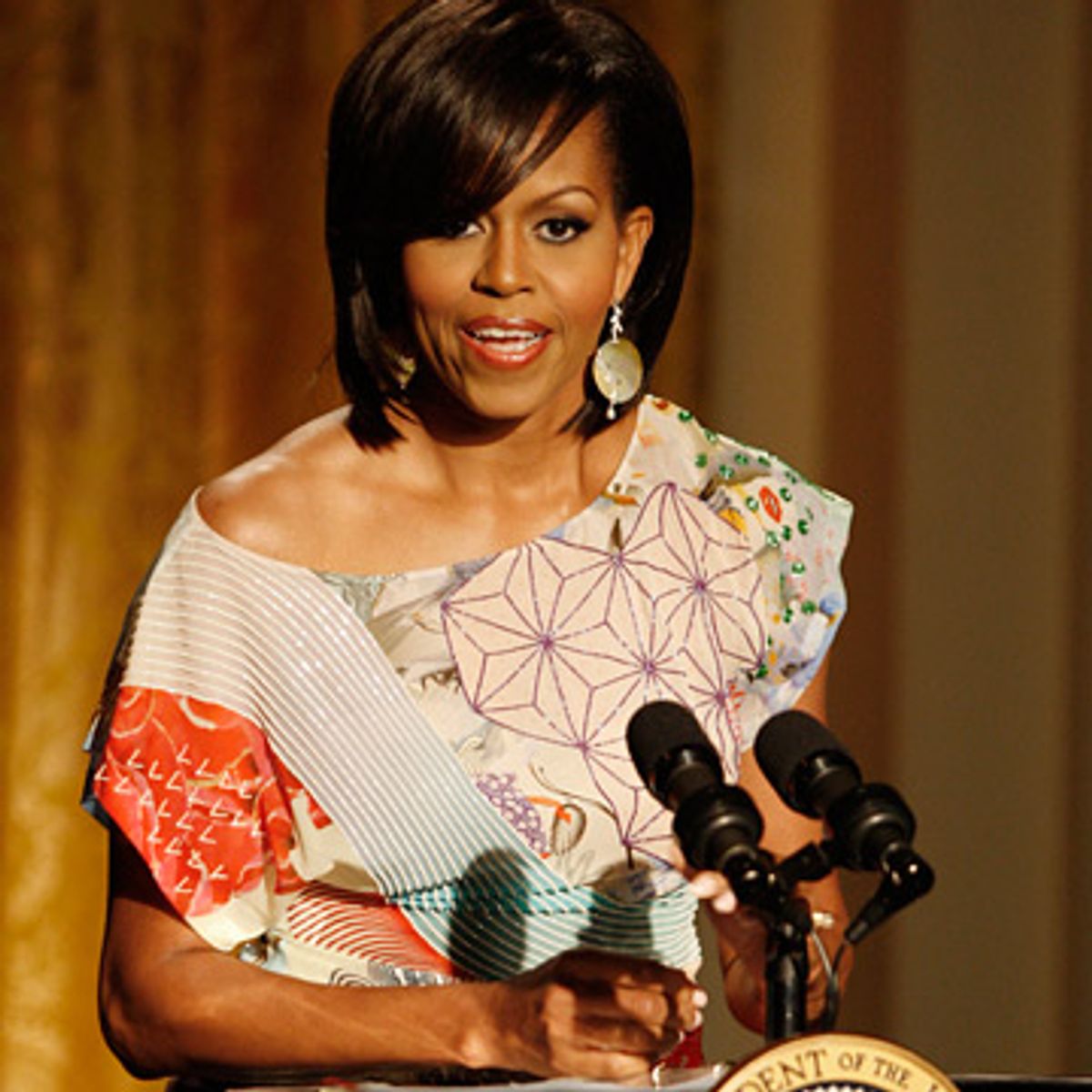 Two weeks ago, the economy shed more jobs, David Souter announced his intention to step down from the Supreme Court, and a minor domestic scandal disrupted at the White House when Michelle Obama wore a black gown to the Time 100 gala that was mistakenly attributed to Azzedine Alaïa, when, in fact, it was designed by Michael Kors. Luckily, the whole thing blew over when Mrs. Obama showed up at the White House Correspondents' Dinner in a fuchsia Michael Kors gown in what People magazine reported might be -- this hasn't been confirmed -- a "peace offering."

Kors brushed off the supposed sartorial slight, making him more gracious than most members of the press. Whether or not Michelle Obama is a "First Lady fashion faux pas," as one newspaper called her, has been a top media story for months and shows no signs of abating. She was criticized for wearing a too-casual cardigan to meet the queen of England and for wearing suede-and-metallic sneakers that weren't casual enough to a food bank. "First Lady Michelle Obama steps out in Lanvin sneakers and they're only $450!" crowed a Daily News headline. "Obama kicks too expensive for volunteering?" asked the Chicago Sun-Times.

PunditMom, a political blogger, was not amused. "Are You More Interested in Michelle Obama's Fashion or Her Works?" she asked on her blog, exasperated that the press transformed Mrs. Obama's formidable organizational skills -- she had corralled more than 100 congressional spouses to the charity event -- into Sneakergate.

I can sympathize with the increasingly large contingent of Americans who are sick of the media's dissecting the finer points of Michelle's hemlines (which are usually a demure below-the-knee length) with more precision than they do Barack's stimulus plan. (Check out firstguns.tumblr.com for a particularly trenchant -- and funny -- take.) It underscores exactly what many women have always feared: that even if you're an Ivy League grad, the size of your bottom in a Narciso Rodriguez dress matters more than your degree.

But while some of the coverage seems snarky and mean, I must admit that I'm amused -- even occasionally interested in -- the celebratory fashion magazine stories, less erudite offshoots of a more general excitement about our new first family. I get the argument that all the attention to Michelle's style makes her look frivolous, but I don't think a penchant for trying out new hairstyles undermines a lifetime engaged in serious work. I just wish this particular frivolity weren't frowned upon because it's associated with women; you don't hear anyone saying that a man obsessed with sports is too silly to be president. (Oh, that's right, he is!) And while America's higher, harder-to-reach appearance standards for women are troubling, I'm not sure the impetus to cover Michelle's appearance is entirely sexist. The press is advancing toward equal opportunity objectification: A shirtless Barack Obama is currently gracing the cover of the Washingtonian magazine, and even John Edwards' well-coiffed hair is back in the news, since it seems to prove he possesses just the kind of unchecked vanity that naysayers insisted was his bête noire all along.

I agree with the pundits that appearance usually does mean something, even a lot of different things. Of course, I'm biased. A former fashion magazine editor, I'm guilty of writing articles celebrating a new Lancome lipstick and parsing the finer points of leg hair, which I sported unabashedly back when I was a women's studies major in college. I don't think there's any contradiction between an interest in pencil skirts and one in political programs and, at 33, I'm part of a generation in which that feeling is common. Many younger feminists grew up reading magazines like Sassy that featured fashion spreads alongside articles on feminism or idolizing clearly appearance-conscious feminists like Gloria Steinem and Naomi Wolf or appearing at antiabortion marches in form-fitting T-shirts. I'm not an uncritical consumer of beauty and fashion culture; I worry about teenage girls struggling with eating disorders and the too-skinny, mostly white models in magazines. In fact, my own fashion preferences tend to favor Marni, an Italian designer whose clothes resemble sacks more than, say, a strappy "Sex and the City" dress. But I also feel pretty good when I'm wearing a pair of pants by Zero Maria Cornejo, a designer I happen to know Michelle likes too, thanks to more than one magazine.

And though I would not, perhaps, go so far as the brand-new how-to-look-like-the-first-lady handbook "Michelle Style: Celebrating the First Lady of Fashion" -- which says that her "sense of style and self is epitomized by the cardigan" -- I would still say that Michelle's predilection for printed dresses, independent American designers, and oversize costume jewelry does say something about her appearance. And the first thing it says is: She's really, really into it. I mean, any woman who shows up at the United Nations wearing a Tracy Feith dress -- with its ever-so-slightly off-kilter cut and bold floral pattern -- isn't afraid to be noticed.

Though much of the media seems to have a persistent fear of her being "inappropriate" or "not classy," the fashion press loves her, partly because she's not tethered to the dowdy tradition of Hillary Clinton and Laura Bush, who famously wore what In Style fashion director Hal Rubinstein called "that suit" ("I say this with real snarkiness," he added, making me remember just why working at fashion magazines can be fun). Hillary, a card-carrying second wave feminist, might have felt compelled to stick with shapeless pantsuits and to play down -- or, let's be honest, never develop -- an interest in fashion, in order to be taken seriously as the intellectual powerhouse that she is. Meanwhile, the equally academically pedigreed Michelle looks like many women who take their cues from Vogue -- which for years has championed mixing and matching high and low fashion, famous and lesser-known designers, fancy clothes with more casual pieces -- pairing a form-fitting dress not with stiletto heels but with comfortable flats, or wearing an off-the-shoulder top but keeping it from looking too sexy by pairing it with pants.

Considering her interest in fashion in the context of her life indicates an entirely modern approach to gender roles: She's a woman who can proclaim herself a mom-in-chief without pretending she isn't smart, share school drop-off with her husband and put aside her high-powered job to serve as his unpaid adjunct without having some sort of identity crisis. And her attention to an eclectic, ethnically diverse group of independent and American designers, some mostly known to those of us who have spent time inside a fashion closet, isn't just smart, subtle support for the kind of businesses that will help our economy get back on track, but evidence of someone whose clothing sensibility is the sartorial equivalent of Barack's working knowledge of postmodern theory: a slightly subversive signal that she gets it.

Besides, she surely knows that no matter what the press says, historical precedent proves they can't control the way we see her. There was an outcry when the New Yorker conflated Mrs. Obama with controversial radical Angela Davis in an infamous cover cartoon. But Davis is a perfect example of how iconic images take on a life of their own. Back in the '60s, some Americans were frightened by pictures of Davis sporting an Afro and giving a black power salute; meanwhile, others were inspired by their revolutionary symbolism. In a recent interview, Davis said that a young black woman once told her she felt "powerful" and "as if she could accomplish what she needed to accomplish" in her Angela Davis T-shirt. Many black women have made similar comments about Michelle, noting how important it is to see a woman who looks like them being treated as the biggest first lady fashion icon since Jackie O.

Of course, this just underscores how some of the press readings of her style are hopelessly retro, if not sexist and racist, which seems to be the real problem with the incessant media coverage. It's not surprising that New York Times Op-Ed writers Maureen Dowd and David Brooks, two baby boomers caught up in rehashing some sort of eternal return of femininity that has been veering toward irrelevancy for decades, use Michelle's muscular arms to insinuate that her husband is a wimp, but it's particularly gross that they're so tone-deaf about playing into a stereotype of black women as bossy and emasculating. Same goes for the stories that paint her as uppity because of her high-fashion sensibilities or invoke the idea of black women as promiscuous when they mention a bit of bare skin. Clearly that post-feminist, post-racial utopia the pundits promised the Obamas had ushered in has not yet arrived. And some of the stories seem as if they're once again hitting us with the unachievable ideals that can make fashion such a predicament for women in the first place: When Pulitzer Prize-winning Washington Post fashion reporter Robin Givhan tells us that "Obama's athletic arms are achievable," not only is she stretching the truth (any personal trainer will tell you that getting sculpted muscles has as much to do with your specific genetic makeup as with your workouts), but she seems to be shaming the rest of us for being lazy.

Reading stories criticizing Mrs. Obama for the sleeveless sheath dresses she often wears, and that some like Dowd and Brooks find inappropriately revealing, makes me want to stop reading the newspaper altogether. (The endlessly punning headlines, like "The Arms Race" are contributing factors.) But it's comforting to know that Michelle doesn't seem to care about the criticism. "No matter which party you belong to we can all agree that Michelle has the right to bare arms," Barack Obama joked at the White House Correspondents' Dinner. Michelle, looking radiant in her bicep-baring dress, smirked and flexed.

Kara Jesella is a freelance writer living in Brooklyn.