Money managers warn Obama's "activism" will hurt unions in the long run. Do they understand how democracy works? 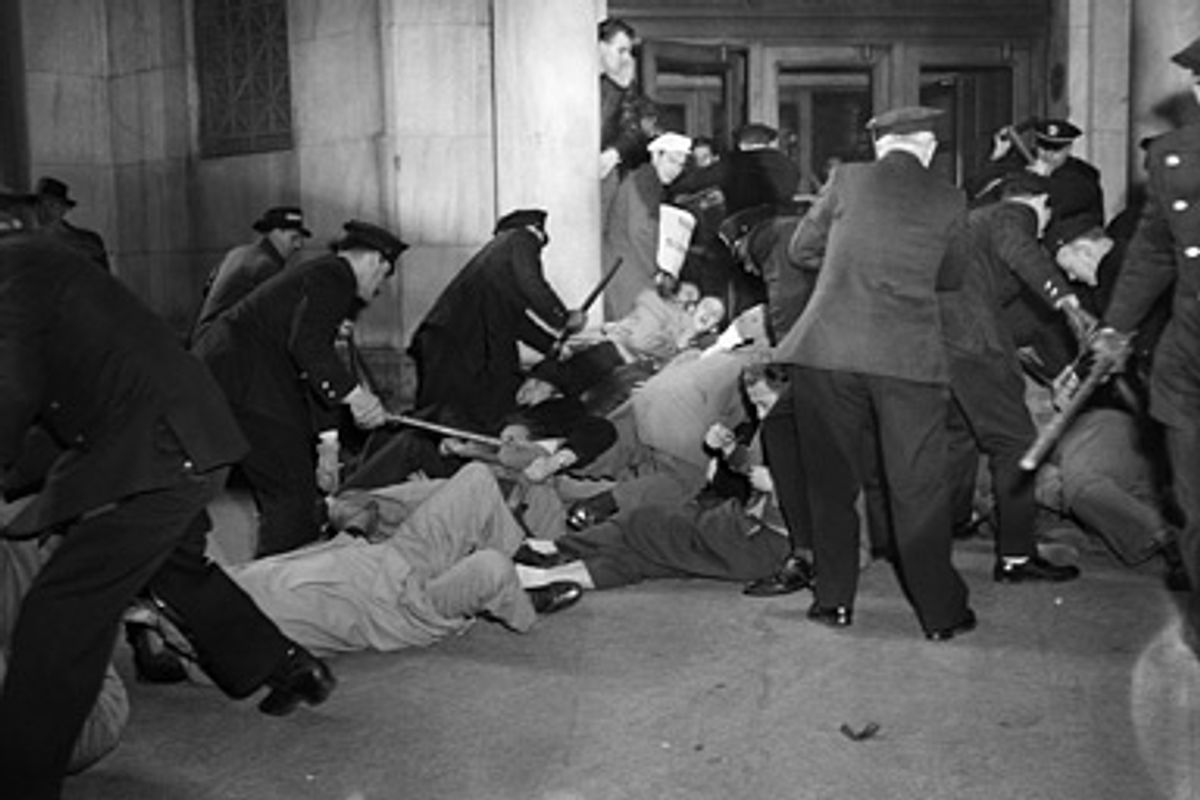 A century ago, when workers organized for better conditions, employers brought in their hired goons to club them into submission or shoot them dead in cold blood. Today, class warfare is much more genteel -- Wall Street just warns that if labor gets too uppity, "borrowing costs" for unionized companies will rise.

That is the gist of a fascinating Bloomberg News article published today, "Fund Managers Burned by Obama Now Say They Are Wary."

Hedge fund manager George Schultze says he may avoid lending to any more unionized companies after being burned by President Barack Obama in Chrysler LLC's bankruptcy....

Pacific Investment Management Co., Barclays Capital and Fridson Investment Advisors have joined Schultze Asset Management LLC in saying lenders may be unwilling to back unionized companies with underfunded pension and medical obligations, such as airlines and auto-industry suppliers, because Chrysler's creditors failed to block Obama's move. The reluctance may put additional pressure on borrowers seeking capital in the worst financial crisis since the Great Depression...

"People are starting to think 'This is a very activist administration, even more than we counted on,'" said Martin Fridson, CEO of money manager Fridson Investment Advisors in New York. "If it comes down to the interest of creditors or labor unions, the administration is going to override what you thought you could do."

Libertarian and right-wing pundits have been warning since the outset of the showdown between Obama and the hedge funds that organized labor would end up suffering in the long run because union shops would be forced to "pay through the nose for credit." The hedge fund whining captured by Bloomberg News would seem to be proof of this.

The naiveté demonstrated by these lords of finance is flabbergasting. In a devastating recession, a Democratic administration is going to look out for the interests of workers, particularly those in electorally crucial Midwestern Rust Belt states. If the hedge funds that were speculating in the discounted debt of Chrysler and G.M. hadn't already priced in the risk associated with the obvious politics involved, then those hedge funds were run by idiots. If I was rich enough to have invested my money with these bozos, I'd be pretty angry at such foolishness. Then again, if there's one thing that we have learned in the last couple of years, it's that Wall Street, by and large, isn't very good at evaluating risk.

This is not to say that those who are chortling over how an apparent victory (if you can call the pathetic crumbs the UAW is salvaging from Detroit's immolation a "victory") for unionized labor is, in the long run, yet another defeat, are incorrect. I have no doubt that hedge funds will be taking longer looks at whether to buy the debt of "unionized companies with underfunded pension and medical obligations."

But if they want to play that game, here's how the White House can respond. Get a comprehensive health care reform plan passed that removes "medical obligations" from company ledgers, and then tax the hell out of hedge funds to raise the revenue to pay for it.

Yes, I know, such out-and-out socialism is highly unlikely even from such an "activist" administration. But in the big picture, the question at the heart of this tussle is who benefits from the use (or non-use) of government power. We appear to be in the middle of a major phase transition in this eternal struggle, but a great many members of the ruling class still don't seem to get it.

One of Ronald Reagan's defining moments was his decision to break the air traffic controllers' union. Union power in the United States was already in decline, but that moment crystallized the changing zeitgeist. From then on, by and large, government worked to serve the interests of Wall Street, under the guiding philosophy that prosperity for the rich would trickle down to the poor.

But with union power crushed and deregulation the order of the day, what did we get? Increasing income inequality, and steadily growing middle- and lower-class indebtedness temporarily disguised by a couple of big bubbles. This was not sustainable. In a democratically run country you can not continue to concentrate wealth and power in the top 1 percent of the population without provoking a powerful reaction. It was a long time coming -- and it might still be a long way away without the catalyst of the worst recession in 70 years combined with the manifest incompetence of the Bush administration -- but it's here, now.

The hedge fund managers can tut tut all they want at the Obama administration's interventions in the affairs of Chrysler and G.M. But as a group, they only have themselves to blame for their predicament. The markets that they worked so hard to keep free from intrusive government meddling failed.

And, really, they should count themselves lucky. Any administration where economic policy is overseen by Larry Summers is hardly about to start expropriating the property of the landed aristocracy. But the more they complain, the better Obama is going to look to the majority of people in this country whose living standards are suffering as a result of Wall Street's irresponsibility, and the stronger his hand will be in pursuing real reform.