Kris Allen surprises everyone, including himself, by beating Adam Lambert and winning the show's eighth season 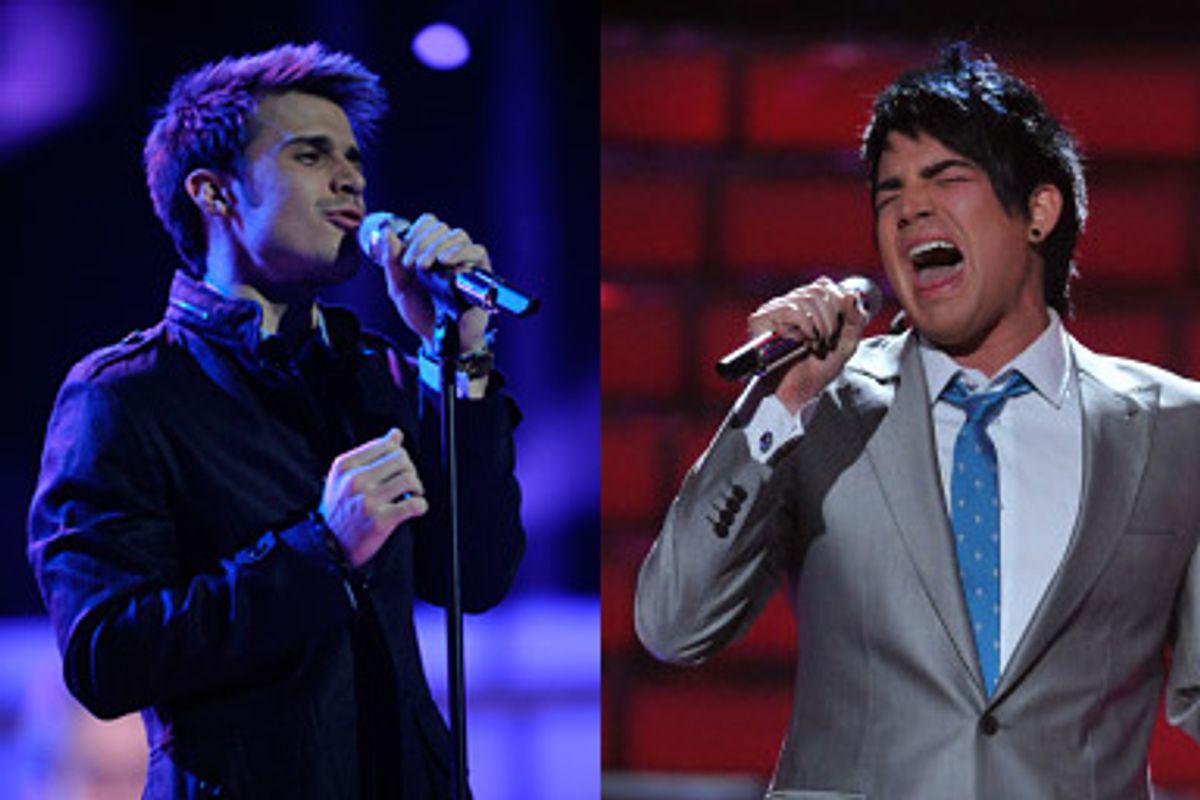 Of all the reasons Adam Lambert might have lost the eighth season of "American Idol" -- homophobia, media overexposure, judges swooning with hyperbole, the cultural triumph of banality -- let me add this to the pile: the power of tween girls.

Tween girls are the fuel of the "American Idol" mothership; they are the ones who jam up the voting lines, texting until their fingers bleed, and they are no small part of the reason 23-year-old Kris Allen -- supremely crushable, pocket-size, deeply religious, utterly unthreatening Kris Allen -- became the "American Idol" winner in the biggest upset in the show's history.

"But Adam deserves this," he stammered after hearing the results.

See, even Kris Allen knew it was not supposed to go down like this.

The title was supposed to go to Adam Lambert, whose daring performances all season turned the predictable show into must-see TV. We haven't had a contestant with his kind of originality since Fantasia Barrino, and even she didn't set old standards aflame like Lambert, whose version of Johnny Cash's "Ring of Fire" was a trippy, otherworldly barnburner. A kind of goth-vampire-rocker hybrid, he wore black nail polish and eyeliner and enough foundation to scrape off with a fingernail, but it was Lambert's performances that stuck out: His "Mad World" was so haunting even Simon Cowell gave him a standing ovation.

After so many years of talented but dull "American Idol" winners -- a little Jordin Sparks here, some Taylor Hicks and David Cook over there -- it was hard not to go overboard about a performer who was genuinely inventive, who could channel both Robert Plant and Liza Minnelli, who was unpredictable and just a little bit dangerous, who injected a slithery vamp into a show that practically wore a chastity belt, and who, by the way, had a banshee wail that made Axl Rose look demure. Whether you were knocked out by what he did, or you found it to be stunty diva caterwauling (and I found myself in both camps on various occasions), his vocal control, his swaggering stage confidence, his plain old pipes made most of the other contestants just look like chuckleheads.

In fact, up until the moment the winner was announced, I actually felt a bit sorry for Kris Allen, who had been eclipsed by the Lambert supernova throughout the two-night finale. Randy might have claimed there was "a real live competition goin' on," but as far as I could tell, in this showdown, one guy had a Glock and the other had a squirt gun.

On the Tuesday night performance finale, Allen followed up Lambert's thrilling, feverish rendition of Sam Cooke's "A Change Is Gonna Come" with a bloodless performance of Marvin Gaye's "What's Going On?" that would be more at home on a subway platform than an arena stage. On the Wednesday night results show, Lambert unfurled his freak flag for a duet with KISS -- he clomped around in towering glitter platforms, his eyelids bedazzled, his outfit sprouting some bizarre metal contraption from his arms that looked like, what? Futuristic shoulderpads? It was fantastic to see him in full-blown rock opera mode, as flames shot up in the background and pinwheeling sparklers lit up the stage. Meanwhile, Allen strummed his guitar with Keith Urban like they were a bar band playing for free Pabst. When Lambert and Allen took the stage for a finale, singing "We Are the Champions" with the surviving members of Queen, it was almost as though Kris Allen had disappeared entirely. Here was Lambert, taking the scepter of Freddie Mercury and sending it soaring into the rafters.

But Allen had flown under the radar all season. And for someone who played his own instruments and had his own way with reinventing a tune, he was much better than anyone gave him credit for. Understated and easygoing, he is the flip side to Lambert's electric Southern California flamboyance: a good Christian boy from a small Arkansas town, humble and self-deprecating, married to a blandly pretty blond. He didn't have the biggest voice, but it was downright frustrating to watch as the judges patted Kris on the head and waved him off into the wings after a shrewdly stripped-down version of Donna Summers' "She Works Hard for the Money," say, or a confident, classy performance of "Falling Slowly" from "Once." His reinterpretation of Kanye West's "Heartless" was better than the original, managing to find a warm, easy groove in that song without resorting to typical "Idol" histrionics. I always imagined him on VH1 one day, wearing his kangol hat with flip-flops on a beach, playing his six-string in front of a sunset, filling the soft-rock hole that's been well-served by Jason Mraz and Jack Johnson. I figured he'd make a great fourth runner-up.

And if there was a backlash against Lambert, it's partly that the judges swaddled him in such fawning praise -- "Iconic!"The Michael Phelps of American Idol!" -- and the media treated him like he was a lock (he made the cover of Entertainment Weekly weeks before the finale) while performers like Allen were almost completely dismissed.

It didn't help Lambert that he seemed out of sync with the middle American families that make up the show's fanbase. "I wouldn't plan on going to Nashville any time soon," Simon Cowell told him after his daring performance of "Ring of Fire."

To which Adam responded, "Trust me, I wasn't planning on it."

Which brings us to the subject of Adam's sexuality. By now, surely you've heard the rumors, or seen the pictures, or read the stories about whether he is or he isn't, and if he is, well, could he still win "American Idol"? In an age when Lindsay Lohan dates a woman, Ellen DeGeneres and Rachel Maddow are household names and Neil Patrick Harris actually increased his cachet by coming out, I counted myself among the people who never thought it much mattered. I find it not only believable that we could have an openly gay American Idol, but also that we could have an openly gay American Idol and it wouldn't even be that big a deal. Maybe I overestimated how far we've come. Maybe I overestimated just how much "American Idol" is stuck in the past.

But what I suspect did in Adam was his penchant for risk and his perceived weirdness, the very qualities that made him compelling in the first place. The tweens who are intended to buy these albums -- the raison d'être for the show, after all, is to push product -- want a star who is huggable and easy to listen to, someone who will sing them pretty power ballads. These are the people who are supposed to buy the first single from the winner, "No Boundaries." Co-written by fourth judge Kara DioGuardi, it is an artless mishmash of nonsense about dreams and hurricanes and mountains, a pop song that's practically computer generated for maximum predictability. Kris Allen, bless him, will have to wear that hairshirt.

Meanwhile, Lambert can focus on his own career. Plenty of the most famous "American Idol" contestants never won, after all. And, hey, I hear Queen is looking for a new frontman.