Rx and the single payer

Americans may want single-payer healthcare, but that doesn't mean they're going to get it. 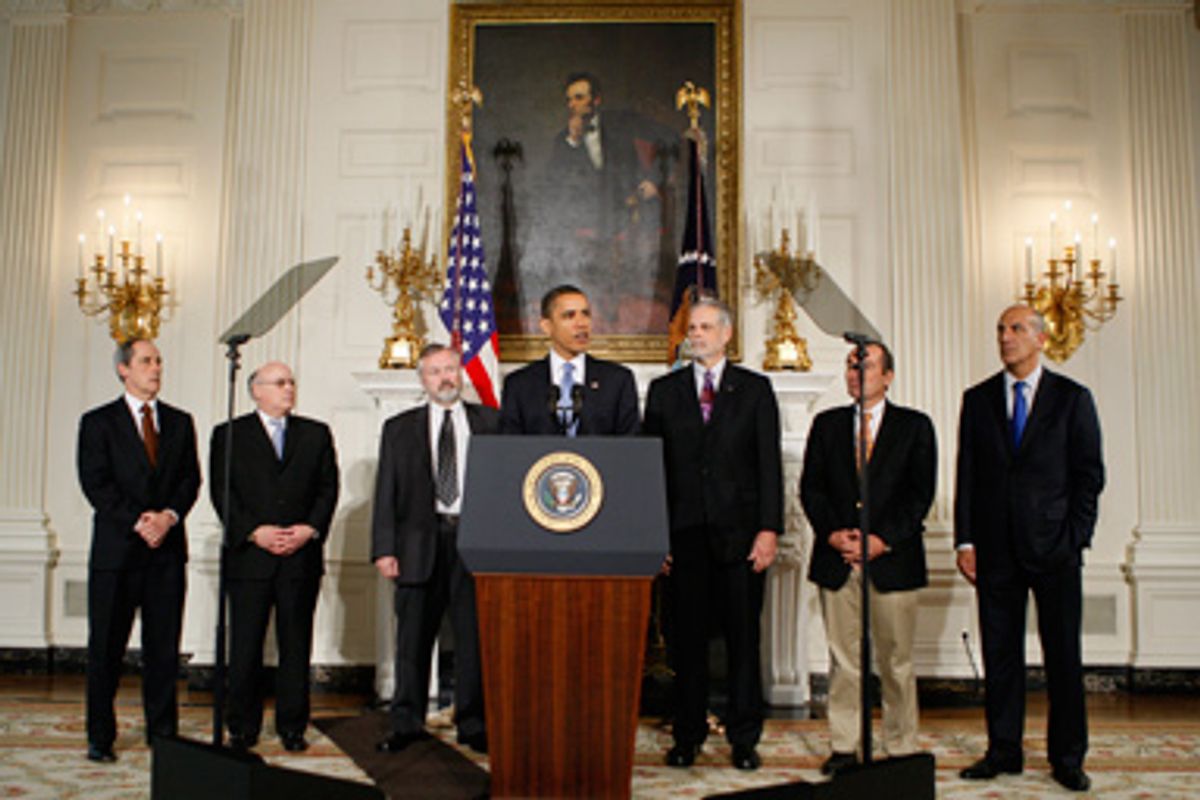 In 2003, a young Illinois state senator named Barack Obama told an AFL-CIO meeting, "I am a proponent of a single-payer universal healthcare program."

Single payer. Universal. That's health coverage, like Medicare, but for everyone who wants it. Single payer eliminates insurance companies as pricey middlemen. The government pays care providers directly. It's a system that polls consistently have shown the American people favoring by as much as 2-to-1.

Fast-forward six years. President Obama has everything he said was needed -- Democrats in control of the executive branch and both chambers of Congress. So what's happened to single payer?

A woman at his town hall meeting in New Mexico last week asked him exactly that. "If I were starting a system from scratch, then I think that the idea of moving towards a single-payer system could very well make sense," the president replied. "That's the kind of system that you have in most industrialized countries around the world.

"The only problem is that we're not starting from scratch. We have historically a tradition of employer-based healthcare. And although there are a lot of people who are not satisfied with their healthcare, the truth is, is that the vast majority of people currently get healthcare from their employers and you've got this system that's already in place. We don't want a huge disruption as we go into healthcare reform where suddenly we're trying to completely reinvent one-sixth of the economy."

So the banks were too big to fail and now, apparently, healthcare is too big to fix, at least the way a majority of people indicate they would like it to be fixed, with a single-payer option. President Obama favors a public health plan competing with the medical cartel that he hopes will create a real market that would bring down costs. But single payer has vanished from his radar.

Nor is single payer getting much coverage in the mainstream media. Barely a mention was given to the hundreds of doctors, nurses and other healthcare professionals who came to Washington last week to protest the absence of official debate over single payer.

Is it the proverbial tree falling in the forest, making a noise that journalists can't or won't hear? Could the indifference of the press be because both the president of the United States and Congress have been avoiding single payer like, well, like the plague? As we see so often, government officials set the agenda by what they do and don't talk about.

Instead, President Obama is looking for consensus, seeking peace among all the parties involved. Except for single-payer advocates. At that big White House powwow in Washington last week, the president asked representatives of the healthcare business to reason together with him. "What's brought us all together today is a recognition that we can't continue down the same dangerous road we've been traveling for so many years," he said, "that costs are out of control; and that reform is not a luxury that can be postponed, but a necessity that cannot wait."

They came, listened, made nice for the photo op. And while they failed to participate in a hearty chorus of "Kumbaya," they did promise to cut healthcare costs voluntarily over the next 10 years. The press ate it up -- and Mr. Obama was a happy man.

Meanwhile, some of us looking on -- those of us who've been around a long time -- were scratching our heads. Hadn't we heard this before?

Way, way back in the 1970's Americans were riled up over the rising costs of health care. As a presidential candidate, Jimmy Carter started talking about the government clamping down. When he got to the White House, drug makers, insurance companies, hospitals and doctors -- the very people who only a decade earlier had done everything they could to strangle Medicare in the cradle -- seemed uncharacteristically humble and cooperative. "You don't have to make us cut costs," they promised. "We'll do it voluntarily."

So Uncle Sam backed down, and you guessed it. Pretty soon medical costs were soaring higher than ever.

By the early '90s, the public was once again hurting in the pocketbook. Feeling our pain, Bill and Hillary Clinton tried again, coming up with a plan only slightly more complicated than the schematics for an F-18 fighter jet.

This time the health industry acted more like Tony Soprano than Mother Teresa. It bludgeoned the Clinton reforms with one of the most expensive and deceitful public relations and advertising campaigns ever conceived -- paid for, of course, from the industry's swollen profits.

As the drug and insurance companies, hospitals and doctors dumped the mangled carcass of reform into the Potomac, securely encased in concrete, once again they said don't worry; they would cut costs voluntarily.

If you believed that, we've got a toll-free bridge to the Mayo Clinic we'd like to sell you.

So anyone with any memory left could be excused for raising their eyebrows at the healthcare industry's latest promises. As if on cue, hardly had their pledge of volunteerism rung out across the land than Jay Gellert, chief executive of Health Net Inc. and chair of the lobbying group America's Health Insurance Plans, assured his pals not to worry about the voluntary reductions. "We believe that we can do it without undermining the viability of companies," he said, "and in effect enhancing the payment to physicians and hospitals." In other words, their so-called voluntary "reforms" will in no way interfere with maximizing profits.

Also last week, John Lechleiter, the chief executive of drug giant Eli Lilly, blasted universal healthcare in a speech before the U.S. Chamber of Commerce. "I do not believe that policymakers have yet arrived at a full and complete diagnosis of what's wrong and what's right with U.S. healthcare," he declared. "And I am very concerned that some of the proposed policies -- the treatments, to continue my metaphor -- will have unintended side-effects that make our situation worse."

So why bother with the charm offensive on Pennsylvania Avenue? Could it be, as some critics suggest, a Trojan horse, getting the health industry a place at the table so they can leap up at the right moment and again kill any real reform?

Wheelers and dealers from the health sector aren't waiting for that moment. According to the nonpartisan Center for Responsive Politics, they've spent more than $134 million on lobbying in the first quarter of 2009 alone. And some already are shelling out big bucks for a publicity blitz and ads attacking any healthcare reform that threatens to reduce the profits from sickness and disease.

The Washington Post's healthcare reform blog reported Monday that Blue Cross Blue Shield of North Carolina has hired an outside P.R. firm to put together a video campaign assaulting Obama's public plan. And this month alone, the group Conservatives for Patients' Rights is spending more than a million dollars for attack ads. They've hired a public relations firm called CRC -- Creative Response Concepts. You remember them -- the same high-minded folks who brought you the Swift Boat Veterans for Truth, the gang who savaged John Kerry's service record in Vietnam.

The ads feature the chairman of Conservatives for Patients' Rights, Rick Scott. Who's he? As a former deputy inspector general from the Department of Health and Human Services told the New York Times , "He hopes people don't Google his name."

Scott's not a doctor; he just acts like one on TV. He's an entrepreneur who took two hospitals in Texas and built them into the largest healthcare chain in the world, Columbia/HCA. In 1997, he was fired by the board of directors after Columbia/HCA was caught in a scheme that ripped off the feds and state governments for hundreds of millions of dollars in bogus Medicare and Medicaid payments, the largest such fraud in history. The company had to cough up $1.7 billion to get out of the mess.

Rick Scott got off, you should excuse the expression, scot-free. Better than, in fact. According to published reports, he waltzed away with a $10 million severance deal and $300 million worth of stock. So much for voluntarily lowering overhead.

With medical costs rising 6 percent per year, that's who's offering himself as a spokesman for the healthcare industry. Speaking up for single payer is Geri Jenkins, a president of the California Nurses Association and National Nurses Organizing Committee -- a registered nurse with literal hands-on experience.

"We're there around the clock," she told our colleague Jessica Wang. "So we feel a real sense of obligation to advocate for the best interests of our patients and the public. Now, you can talk about policy but when you're staring at a human face it's a whole different story."