Another round for democracy 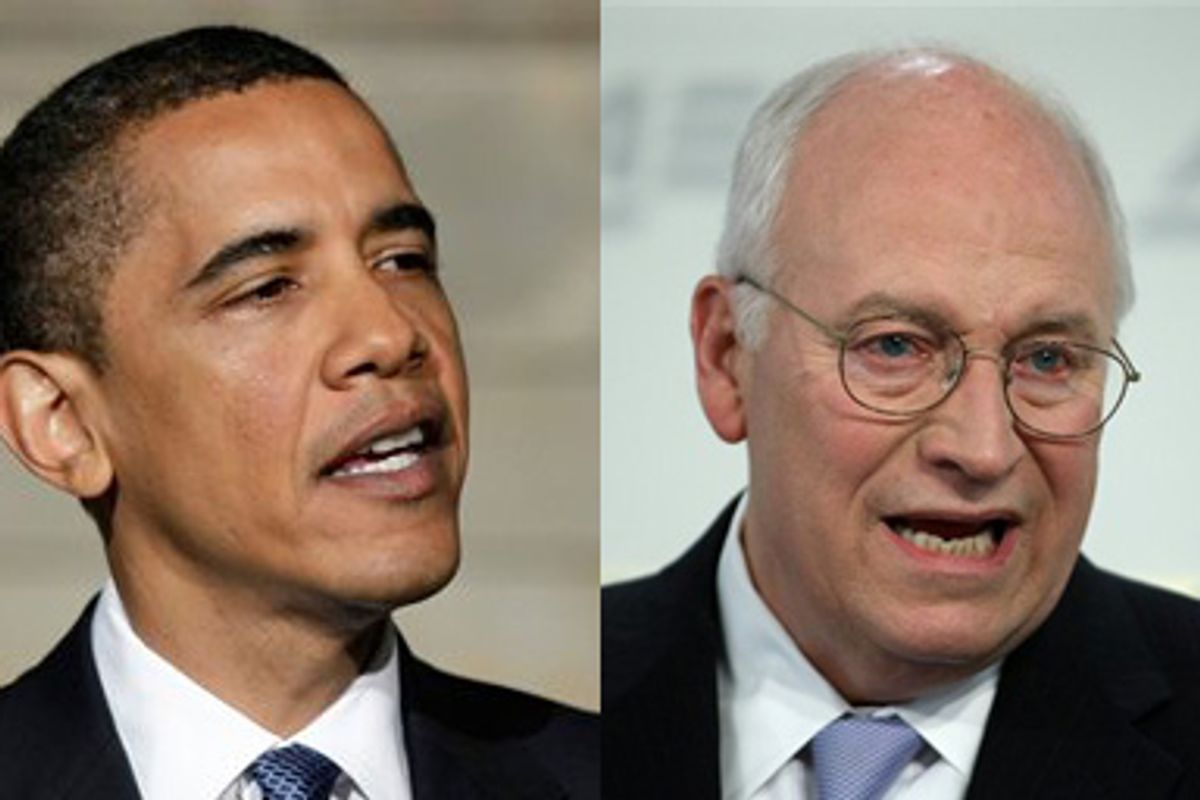 In his landmark speech on terrorism and the Constitution, President Barack Obama sought to draw the sharpest contrast possible between his policies and those of his predecessor on the critical issues of secrecy, torture and the rule of law -- perhaps in response to critics who see an unflattering resemblance. By choosing to deliver his address at the National Archive, in the presence of the original founding documents, the president stressed his own determination to bring America back to the principles expressed in the Declaration of Independence, the Constitution and the Bill of Rights.

Penetrating and direct as Obama's words were, his message was amplified by Dick Cheney's latest attempt to justify and even glorify the lawlessness that the new president has vowed to eradicate. The former vice president's choice of forum was likewise telling, for he chose the Washington redoubt of neoconservatism, the perverse authoritarian ideology that guided (and misguided) the national security decisions of the previous administration.

Whatever the shortcomings of the present administration in restoring civil liberties and openness to government -- there are and will be many -- the commitment delivered again today by the president at the very least provides a benchmark for evaluating his performance and a restoration of the idea that Americans stand for fairness and decency. Methodically but eloquently, he described the dilemma that he confronts as a commander in chief who must protect the nation and its people against extremely malevolent enemies while respecting the democratic institutions that balance his power as well as the human rights of those same enemies. Not only is that approach the only way to remain true to his oath of office, the president said, but it is also the only way to effectively defend ourselves and our allies against those who would do us harm.

"The decisions that were made over the last eight years," he said, "established an ad hoc legal approach for fighting terrorism that was neither effective nor sustainable -- a framework that failed to rely on our legal traditions and time-tested institutions; that failed to use our values as a compass." The "mess" created by those errors can be expunged only by returning to core values.

"To protect the American people and our values, we've banned enhanced interrogation techniques," Obama pledged. "We are closing the prison at Guantánamo. We are reforming military commissions, and we will pursue a new legal regime to detain terrorists. We are declassifying more information and embracing more oversight of our actions, and we're narrowing our use of the state secrets privilege."

With a touch of acid sarcasm, Obama explained that irresponsible politicians who exploited fear made the wrong decisions over the past eight years -- and said that they are repeating those mistakes now with their demagogic campaign against closing the Guantánamo prison camp. He set his own choices in context, from the Supreme Court decisions that struck down the unconstitutional actions of the Bush-Cheney administration to the protests by John McCain, his erstwhile Republican opponent, against torturing prisoners and the continued operation of Gitmo. Rather than pretend that whatever he might do as president would be lawful per se, he promised to find lawful ways to protect necessary secrets and detain dangerous prisoners.

Cheney's attempt to lampoon this sober and thoughtful leader as yet another loony leftist simply fell flat, even as he exposed once more his own innate hostility to American standards of liberty and democratic discourse. By inventing an Obama who doesn't exist he returned to the same dishonest style of argument that became so drearily familiar during his years in power.

He complained bitterly about the "emergence of euphemisms" in the national security debate, which he attributed to the president. "Apparently using the term 'war' where terrorists are concerned is starting to feel a bit dated ... And finding some less judgmental or more pleasant-sounding name for terrorists doesn't change what they are -- or what they would do if we let them loose." (As for euphemism, that is an accurate way to describe the Cheney term for waterboarding, which he called "tough questioning.")

In fact, Obama has never tried to redefine terrorists or terrorism into something less threatening, in this speech or any other. (At the National Archive he referred to "terrorists" and "terrorism" more than 25 times.) As for the nature of the conflict with those who attacked the United States on 9/11, he was blunt. "Now let me be clear: We are indeed at war with al-Qaida and its affiliates."

Aside from distorting Obama's rhetoric to fit a false liberal stereotype, the former vice president simply lied about the aims and conduct of the abusive interrogations he approved. "From the beginning of the program," he claimed, "there was only one focused and all-important purpose. We sought, and we in fact obtained, specific information on terrorist plans." But we now know that there was certainly at least one other purpose that was of great importance to Cheney: namely, the effort to find (or coerce confessions about) the mythical connection between al-Qaida and the Saddam Hussein dictatorship. Mindful of that damning fact, he barely dared to mention the war in Iraq.

Beyond the distortions and the lies, there was one passage in Cheney's speech that underlined the authoritarian character of the former vice president and his hosts. Not only must we not reverse the policies of the previous administration, but according to him, we should not even debate them -- because the merest discussion of the troubling issues raised by the war on terrorism only encourages the enemy.

When the leaders of al-Qaida "see the American government caught up in arguments about interrogations, or whether foreign terrorists have constitutional rights, they don't stand back in awe of our legal system and wonder whether they had misjudged us all along," he sneered. "Instead the terrorists see just what they were hoping for -- our unity gone, our resolve shaken, our leaders distracted. In short, they see weakness and opportunity."

That contempt for democracy as "weakness" should be familiar to anyone who has studied authoritarian regimes in history and around the world today. It was one of the hallmarks of an American regime that is at long last gone, but inflicted damage that will require years to repair.