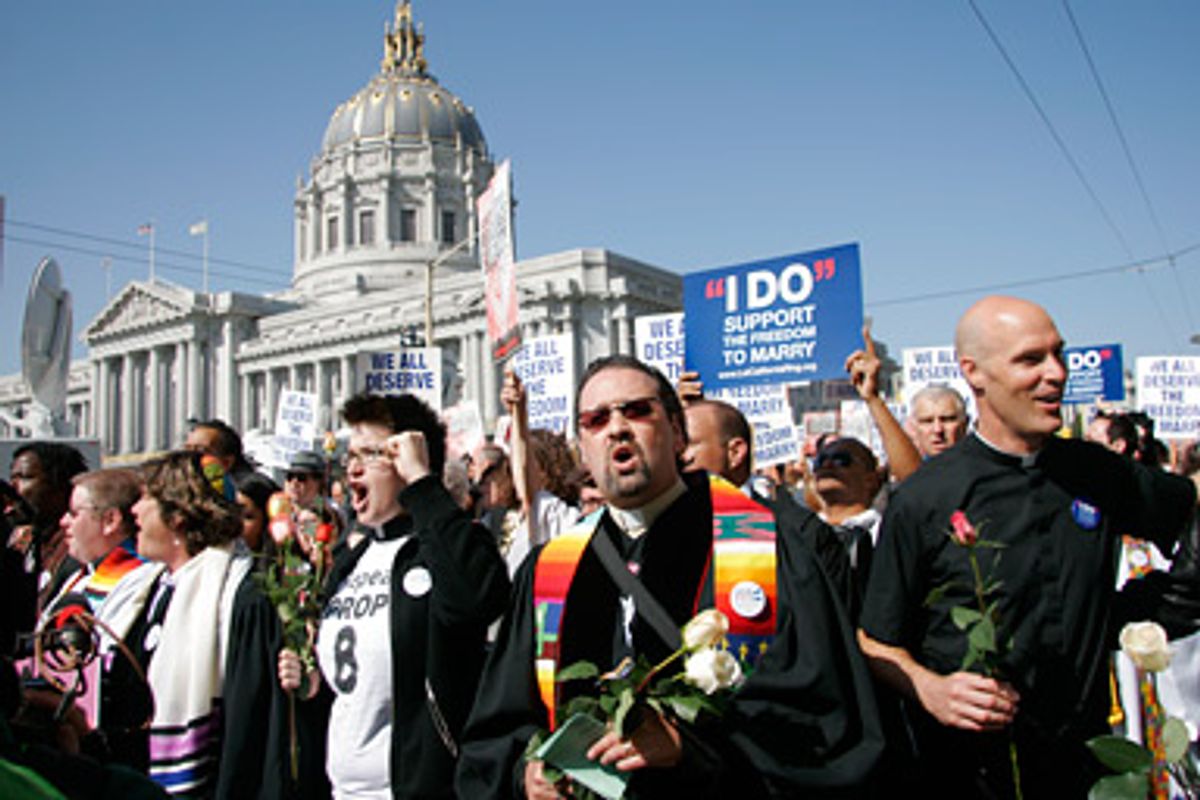 People march in protest against Proposition 8 on Tuesday in San Francisco.

SAN FRANCISCO -- Kory O'Rourke and Kate Sheppard huddled under a tree on the sidewalk near Civic Center Park trying to shield their children, Keaton, 3, and Corbyn, 1, from the sun and waiting to hear the fate of their marriage. The San Francisco couple had been joined in a commitment ceremony in 2000, married for the first time in 2004 and tied the knot again on June 17, 2008, just as soon as the California Supreme Court's last ruling on same-sex marriage would allow it. Soon they'd learn that, while their marriage is still valid, the court's ruling upholding Proposition 8 means other same-sex couples in California won't be allowed to wed.

The family was among the hundreds of gay-marriage supporters gathered just before 10 a.m. to hear the California Supreme Court's decision on the constitutionality of Proposition 8. Most stood in the street behind police barricades, with many in the crowd waving signs that read, "We All Deserve the Freedom to Marry," and others wearing T-shirts that read "Separate Is not Equal."

Amid the throng filling the street and shutting down traffic in front of the courthouse, there were only a smattering of Proposition 8 supporters, with one sign declaring, "Marriage still = 1 man & 1 woman."

As 10 a.m. approached, the chant went up from the crowd: "What do we want? Equality! When do we want it? Now!" But the mass quieted as a handful of same-sex marriage leaders trickled out on the courthouse steps, holding the pages of the press release and the text of the decision itself in their hands. For about 30 sickening seconds, the crowd didn't know which way the ruling had gone, although many assumed the worst, and then a chorus of boos rose as the word of the court's ruling spread.

Despite refusing to strike down Proposition 8 on constitutional grounds, the state Supreme Court ruled that the decision does not impact the 18,000 marriages of same-sex couples that took place before the California Constitution was modified by voters to discriminate against gays and lesbians. Yet O'Rourke, a stay-at-home mom, says that the court's decision is still "devastating" to her and her family. She expressed dismay that California, where five years ago, in February 2004, the national fight for same-sex marriage began in earnest when San Francisco Mayor Gavin Newsom began allowing the marriages of same-sex couples like O'Rourke and her wife, is now behind other states, such as Iowa and Vermont, on the road to marriage equality.

"We don't want our kids to grow up in a society where people are not treated equally under the law," said Sheppard, who works for the YMCA. "We are going to win this fight. In the meantime, it's very hard to be in the middle of it having our children told that our family is less." Both women predicted that the issue will go to the California voters again on the 2010 ballot. "We're hopeful that California will do the right thing," said O'Rourke.

As the crowd began to march in the street toward City Hall, Christina McGowen, a stay-at-home mom, held her almost-3-year-old daughter August's hand, while her husband, Sean McGowen, who works for Costco, pushed younger sister Liberty, almost 1, in a stroller. The young straight couple had driven in from Antioch, about 45 miles away, to witness the decision and show their support for same-sex marriage: "I feel like it's unfair that we're able to get married and have all the rights for our family and other people are not," said Christina, who held a sign that read, "Hate is not a family value."

As the marchers moved around Civic Center Park, some had festooned a statue of Abraham Lincoln, which sits in front of City Hall, with roses, a heart and signs reading, "We all deserve the freedom to marry" and "Separation of church and state." Marching past the protesting statue was Kurt Fausset, 29, a knitwear designer, who moved to San Francisco from Florida three years ago: "I thought California would be a place where I wouldn't have to worry about this kind of stuff," he said. Fausset, who is not married but has a boyfriend, said that he's sad to think he might miss out on the joys of marriage in the future: "It's something that I've looked forward to my whole life, to find out who I was going to marry."

Ken Broshous of San Francisco described himself as hurt, saddened and disgusted by the court's decision. To those who had voted for Proposition 8 in the name of the sanctity of marriage he had this to say: "They can outlaw divorce."

Just down the block from Civic Center Park, same-sex marriage activists had stopped traffic by joining hands in a giant circle at the intersection of Grove and Van Ness near City Hall, and police started making arrests. Meanwhile, on Twitter, the hash tag "#rejectprop8" received a tweet per second as reactions to the news and reports on the event piled up.

An even bigger rally and march is planned at City Hall at 5 p.m. tonight. To think, it was just a few weeks shy of a year ago when ecstatic gay and lesbian couples rejoiced at that very City Hall for their fully legal nuptials.