Sotomayor: The triumph of empathy

The president introduces an obviously moved Sonia Sotomayor, his pick to replace David Souter on the Supreme Court. 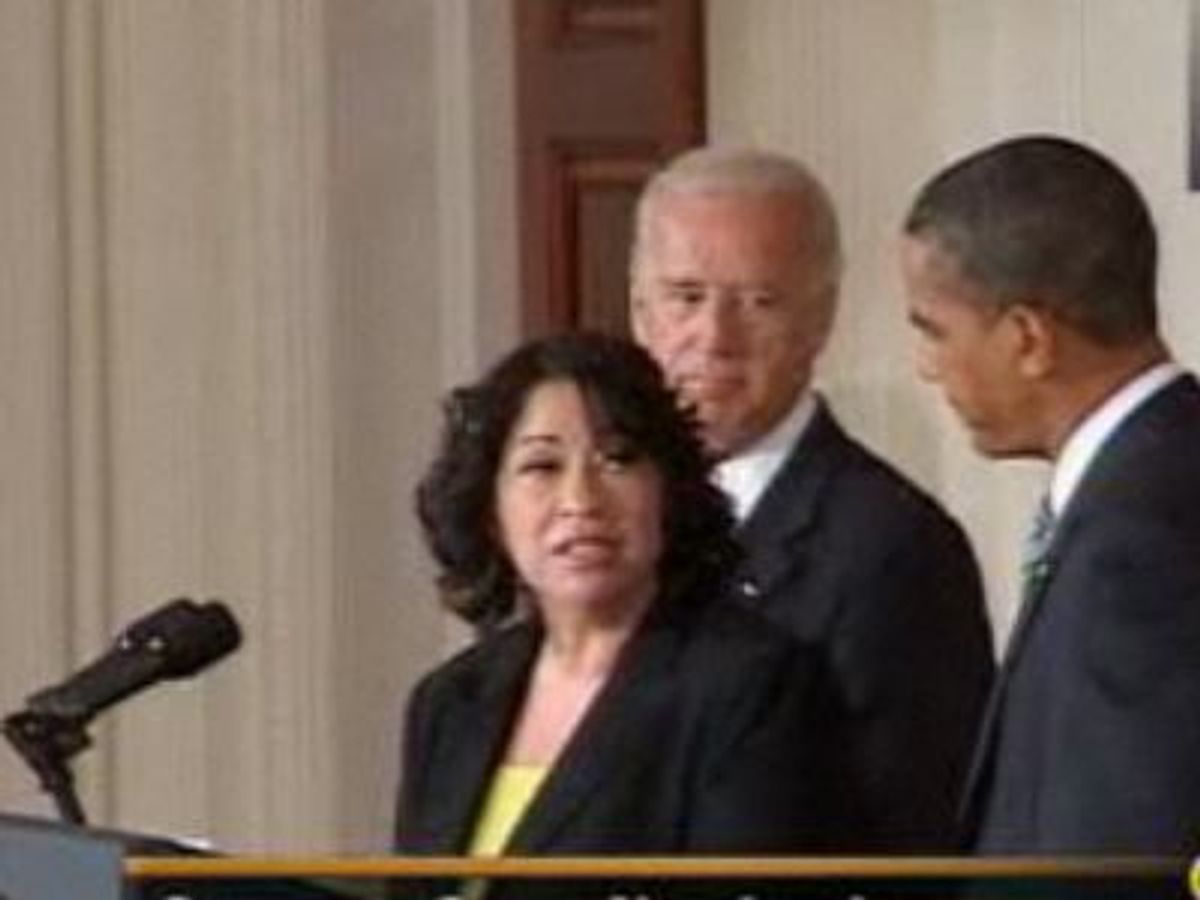 For once, Vice President Joe Biden said it best. When Sonia Sotomayor, President Obama's pick to become the next Supreme Court justice, finished speaking and stepped away from the podium, he turned toward her and said, loudly enough to be caught on a still-hot mike, "I told you, piece of cake. Piece of cake. You did wonderful."

For this morning, at least, it was a piece of cake. Sotomayor, currently a federal appeals court judge, performed as well as the White House could have hoped, or better. And in doing so, she's made it even more difficult for conservatives to come after her.

Sotomayor is no John Roberts, who, when nominated by then-President Bush, was portrayed as the white picket fence American dream, a JFK for the Supreme Court, with his dancing son Jack in the role of John-John. But that's not what President Obama and his team wanted. They got what they wanted, a different kind of American story: another woman to make the Supreme Court feel less like a boys' club, a Hispanic and, most of all, someone with an inspiring story, a rags-to-riches tale who will make the public empathize with her as much as she'll empathize with those who come before her, a quality Obama had said he'd been seeking.

The announcement was full of emotion; Sotomayor herself was obviously moved, and said so, and Obama himself observed that the judge's mother "has been a little choked up." It couldn't be free of emotion, not with Sotomayor's story.

"Born in the South Bronx, she was raised in a housing project ... Sonia's parents came to New York from Puerto Rico during Second World War ... When Sonia was 9, her father passed away, and her mother worked six days a week as a nurse to provide for Sonia and her brother -- who's also here today, is a doctor, and a terrific success in his own right -- but Sonia's mom bought the only set of encyclopedias in the neighborhood, sent her children to a Catholic school called Cardinal Spellman, out of the belief that with a good education here in America all things are possible," the president said.

"With the support of family, friends and teachers, Sonia earned scholarships to Princeton, where she graduated at the top of her class, and Yale Law School, where she was an editor of the Yale Law Journal, stepping onto the path that led her here today."

Watch video of the announcement:

Along that path, Obama said, Sotomayor has been a prosecutor, a litigator, a trial judge and finally served on the 2nd Circuit Court of Appeals. She was nominated to become a federal district court judge by President George H.W. Bush, and elevated to her current post by President Clinton.

The right has already gone after Obama for saying that he was looking for "empathy" in a justice, and that attack will almost certainly be repeated now. But Sotomayor did a good job of explaining what that means, at least when it comes to her.

"This wealth of experiences, personal and professional, have helped me appreciate the variety of perspectives that present themselves in every case that I hear," she said. "It has helped me to understand, respect and respond to the concerns and arguments of all litigants who appear before me, as well as to the views of my colleagues on the bench. I strive never to forget the real world consequences of my decisions on individuals, businesses and government."

It will be hard to counter that, and some conservatives may ultimately elect to keep their gunpowder dry and live to fight another day.