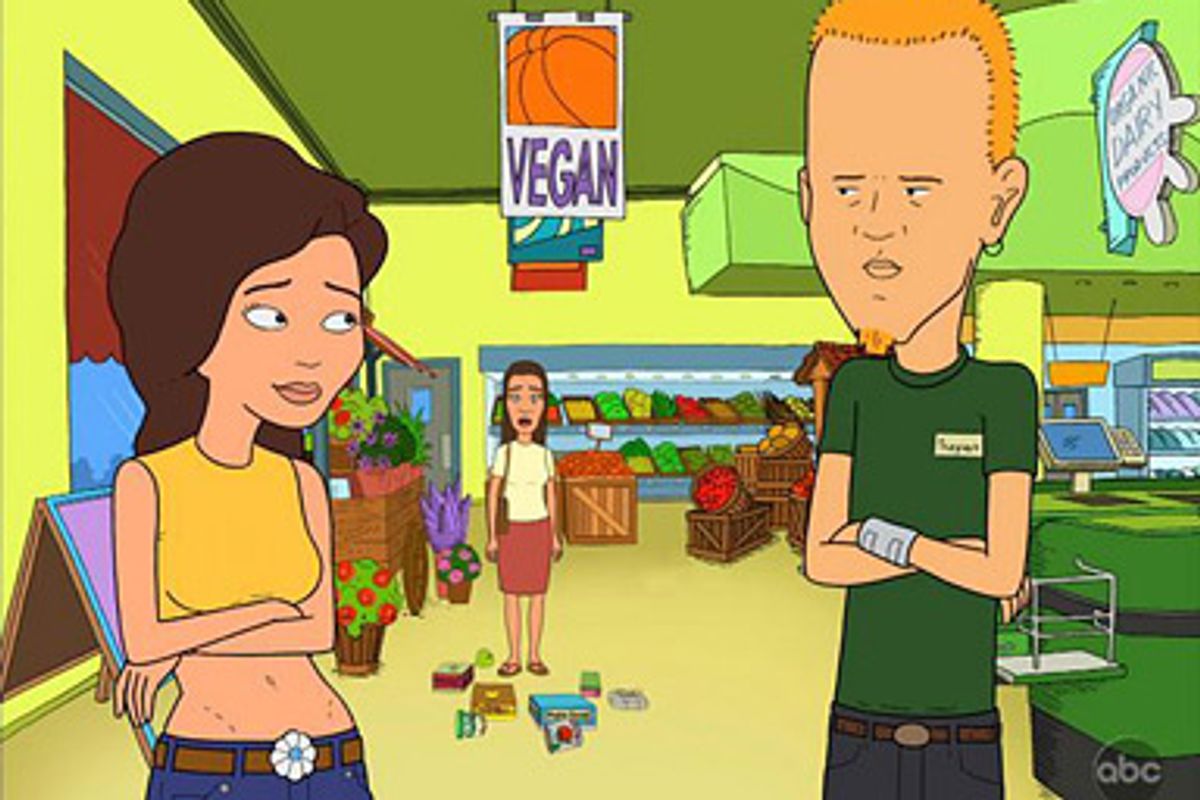 Finding a car with low emissions that seats five. Affording hormone-free, free-range chicken. Speaking about everything in purely politically correct terms. Handling guilt that's proportionate to the size of your carbon footprint. This modern world is not an easy place for the environmentally conscious to navigate. Remember when it was good enough to plant a tree, give peace a chance, and subvert whatever dominant paradigm was within easy reach?

Those days are gone. Today, being a true, card-carrying liberal is a serious pain in the ass. Or, as Helen Goode of ABC's new, animated half-hour comedy "The Goode Family" (premieres 9 p.m. Wednesday, May 27) proclaims, "Being good is sooo hard!" Helen repeatedly finds herself in the tough spots that most of us do, trying to balance our higher consciousness against the fact that sometimes we need toxic insecticides to kill the mass insurgence of bugs attracted to our compost piles. This locally grown, organic, low-hanging fruit has been ripe for the picking for some time now, and who better to take on the task than Mike Judge, the man who brought us middle-American fables "King of the Hill" and "Office Space"?

The comedy here isn't character-driven so much as theme-driven ­-- relentlessly so. The show's pilot episode begins with a trip to the local "One Earth" grocery store, where Helen and other shoppers are urged to "Check out the big board to see how you can limit the impact of your existence!" The board includes moving tickers that add up "Acres of Rain Forest Lost Per Minute" and "Area of Ice Cap Melting Per Minute," along with lists that tell shoppers which kinds of seafood are eco-friendly. (In typical confusing fashion, "Farm Raised Catfish" flashes between the "Good" and "Bad" categories without settling under one or the other.)

There is a loose plot underneath all those p.c.-baiting jokes, formed around Helen's misguided desire to make her daughter, Bliss, talk to her openly about sex. Bliss responds by insisting on attending a creepy pro-abstinence father-daughter dance, where, in something closely resembling a wedding ceremony, fathers give their daughters "abstinence rings" symbolizing their virginity. Liberals may be unnervingly touchy-feely, Bliss learns, but conservatives can be downright twisted.

Helen and Gerald are besieged by their unwieldy ideals once again when their adopted son, Ubuntu, learns to drive. Sure, he is only taking the family hybrid, with its unholy eggbeater-meets-microwave purr, out for a spin, but he still can't resist his testosterone-driven urge to drag race.  Afterward, he apologizes to his dad for wasting so much gas. "That's OK," Gerald replies. "What's important is that you feel guilty about it."

Meanwhile, the Goodes' supposedly vegan dog, Che, is starving and out for blood. Local pets in the neighborhood have been disappearing, but when Che drools and chases a squirrel up a tree, Gerald tells the neighbors, "Look, Che is trying to warn his squirrel friend to be careful!" While repeated jokes about the stink of organic fertilizers and confusion over what to call African-Americans might feel a little obvious after a few episodes, the more subtle observations of wishy-washy, unsustainably idealistic attitudes will likely constitute the meat and potatoes --­ or tofu and kale --­ of "The Goode Family" affair. Take the Goodes' squeamish liberal parenting style, insisting that they're close with their kids while reality lags far behind their utopian visions. The couple is armed with typical rationalizations at every turn. When Bliss blows off her mother's attempts at talking, Gerald assures her, "Don't worry, if you weren't close, she wouldn't feel comfortable ignoring you like that."

Later, Gerald tries to lure Helen out of her bad mood by telling her, "'The View' is on. The pretty one is saying crazy stuff again!" Of course, it's not just liberals who share in Gerald's sport of right-wing rubbernecking, pointing to one of Judge's major strengths as a writer: sharpening our focus on the absurdities that surround us, whether it's paying $9 a pound for relaxed, spiritually balanced chickens or tolerating the enforced cheer of restaurant chains like "Office Space"'s fictional bar and grill, Tchotchke's. Just as "King of the Hill" started out as a show about middle-class Texans and slowly evolved into a twisted take on mainstream suburbia and family life at large, "The  Goode Family" should eventually transcend the boundaries of its original premise (if the writers are given free range, that is).

And thank goodness for that, because the only thing more restrictive than a  100% dolphin-safe, wheat-free, dairy-free, organic, non-allergenic, lactose-intolerant lifestyle is a half-hour comedy about it.