Buchanan on Sotomayor: "Not that intelligent"

If Republicans keep trashing the Supreme Court nominee, they'll wind up an even tinier minority than they are now. 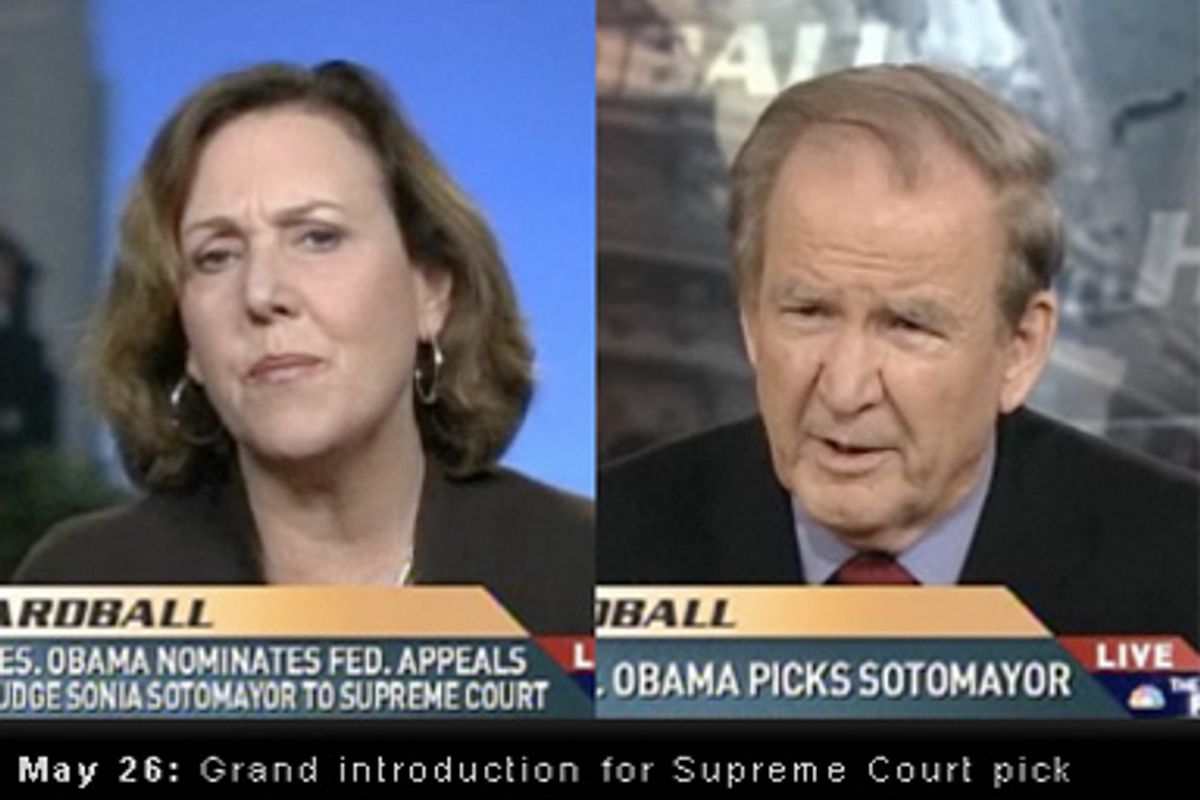 Let's take a moment to acknowledge the history made when President Obama chose 2nd Circuit Judge Sonia Sotomayor to replace David Souter on the Supreme Court. The Latina standout from the Bronx, beloved daughter of a widow who worked two jobs to put her children through the best schools, is a woman who also happened to graduate Phi Beta Kappa and summa cum laude from Princeton; who ran the Yale Law Journal; who worked as a prosecutor and a civil litigator before being appointed to the federal bench. She has more judicial experience than any of her other eight would-be colleagues did when they joined the court.

In short: She's got an American dream story, she makes women and Latinos proud, and she's also supremely qualified. It doesn't get any better than that for Democrats.

And it can only get worse for Republicans if they're going to hit Sotomayor the way MSNBC political analyst Pat Buchanan did debating me on "Hardball" today. (Actually, Mike Huckabee may have sunk lower than Buchanan. Earth to Mike: Calling Sotomayor "Maria" is not going to win you Latino votes in 2012.)

On "Hardball" (video below) Buchanan tossed me some weak softballs about Sotomayor. It was the same handful of charges that make up the key, easily refuted GOP talking points: that she claimed in a speech that appellate judges make policy (she did not); that she voted to discriminate against white men in the New Haven firefighter case (she merely upheld a lower court's ruling); that she said her gender and race would influence her court rulings, improperly, according to Buchanan (I'll deal with that one later). Amazingly, Buchanan's final shot was the widely derided and debunked Jeffrey Rosen piece in the New Republic that let anonymous sources trash Sotomayor, mostly to call her "domineering and dumb," in the words of Rebecca Traister. "She is not that intelligent," Buchanan insisted, a ridiculous assertion given her educational and professional accomplishments.

Unbelievably, Buchanan compared Sotomayor to Harriet Miers, President Bush's personal attorney who was, in fact, not at all qualified to be a Supreme Court justice. Ever notice it's the Republicans whose "affirmative action" picks aren't qualified (as in Miers and Clarence Thomas)? Watch it all here:

Where do I begin? First of all, if Republicans are going to be tin-eared enough to attack Sotomayor on her intelligence and qualifications, they are going to wind up an even tinier minority party than they are now. Acting as though Obama had to lower his standards to appoint the first Hispanic justice is offensive to more than just Hispanics; it exposes a profound prejudice and lack of knowledge about the vast talent pool in our country. Certainly Sotomayor will face tough questions on her judicial philosophy from liberals and conservatives, and she should, but to insinuate she's merely an affirmative action pick is wrong and repellent.

The irony is that Sotomayor is more centrist than some of Obama's other possible appointees. She disappointed abortion rights advocates by failing to strike down the Bush administration's global gag rule, which prohibited organizations that received U.S. family planning funds from counseling abortion. She's been criticized for upholding a school's decision to discipline a student for differing with school officials on her private Live Journal account. The American Bar Association termed her a "moderate," not a liberal. Glenn Greenwald, while praising the choice of Sotomayor, has already noted that Diane Wood might have been a more reassuring pick to those concerned about Obama's assertion of executive powers; Sotomayor hasn't left a record in such cases.

I happen to think that at her confirmation hearings, she might want to explain and elaborate on one much-criticized sound bite. Taking issue with the famous notion frequently attributed to Justice Ruth Bader Ginsburg -- that a wise old man and a wise old woman would reach the same conclusion when deciding cases -- she said instead: "I would hope that a wise Latina woman with the richness of her experiences would more often than not reach a better conclusion than a white male who hasn't lived that life." Even I might quibble with the use of the term "better conclusion"; certainly Justice Harry Blackmun's work on abortion rights is as important to women as the many decisions of Sandra Day O'Connor and Ruth Bader Ginsburg. We'll see what Sotomayor has to say about that quote, and her philosophy about diversity, during her confirmation hearings, I'm sure. But it would be silly to deny the possibility that a court made up of individuals with diverse backgrounds may well draw different conclusions than one made up of nine white men.

I find the reliance on old racial and gender stereotypes, when it comes to debating the Sotomayor pick, extremely depressing. Buchanan also said she's known as a "bully" on the bench, and I never got to ask him and Chris Matthews: Why is it that strong women are so often called bullies and ballbreakers, while strong, opinionated men are often called, simply, Justice Scalia. But this time, I don't think it will work. If Pat Buchanan and other right-wing pundits want to savage the pride of the Bronx's Cardinal Spellman High School, I'm sure Democrats will say "bring it on."