Sonia Sotomayor is not Clarence Thomas

Why do Republicans think Sotomayor is a mediocre beneficiary of affirmative action? Because they had their own. 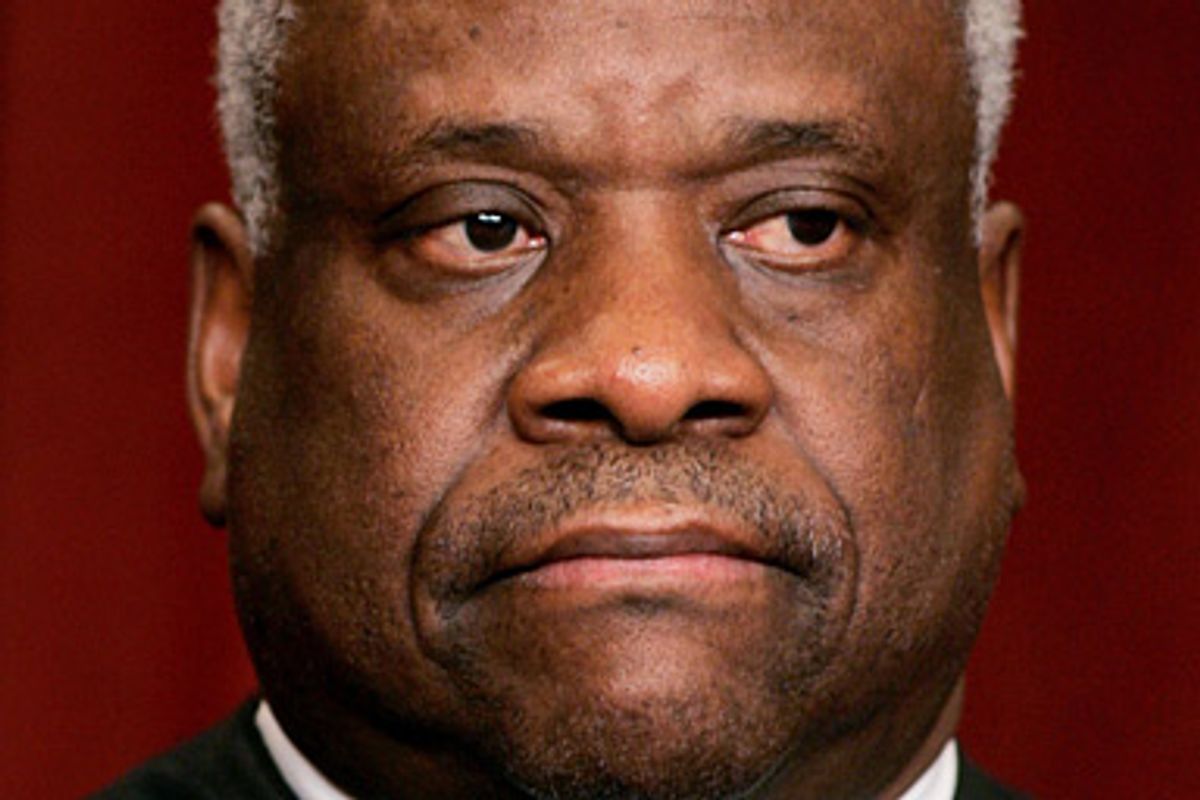 For Sonia Sotomayor, nothing could be quite so predictable at this moment as her vicious denigration by Glenn Beck, Rush Limbaugh, Ann Coulter, Karl Rove, the denizens of the Corner at National Review Online and the myriad squawking noisemakers on Fox News. With instantaneous unanimity, the right-wing verdict against the judge was handed down. She is "dumb," or at least "not that bright," a slur that requires no evidence because she is obviously an "affirmative action" nominee for the high court.

And we all know what that means, don't we? Just ask Clarence Thomas.

So why do some of Sotomayor's nastiest adversaries imagine that the public will accept these false characterizations of her intelligence and credentials? Perhaps that instinct follows from the right's own sad experiences with Republican affirmative action -- most notably in the matter of Justice Thomas, who embodied all of the problems that conservatives perceived in the pursuit of ethnic diversity. When the wingnuts attack Sotomayor with inaccurate stereotypes, they're projecting onto her the shortcomings of their own beloved Clarence.

Eighteen years ago, the Senate confirmation of Thomas earned historic notoriety for its bizarre descent into conflicting recollections of sexual harassment and pornographic banter. But the lingering question about the man selected to replace the legendary Justice Thurgood Marshall was whether he fulfilled the White House description of him as "the most qualified [candidate] at this time." As Thomas confessed in his memoir a few years ago, "Even I had my doubts about so extravagant a claim."

So extravagant was Bush's assertion as to verge on comical. Far from being the "most qualified," Thomas was a nominee with no experience on the bench beyond the 18 months he had served on the U.S. District Court of Appeals. He had never written a significant legal brief or article. He had achieved no distinction in private practice or law enforcement. He had never even argued a case in federal court, let alone at the U.S. Supreme Court.

Indeed, his entire career had resulted from affirmative action, beginning with his admission to Holy Cross College, continuing with his acceptance by Yale Law School, and including his first job as an assistant attorney general in Missouri. Thomas later insisted that he had been damaged by the stigma of affirmative action, especially when he tried to find a job after graduating from Yale Law. (To the extent that minorities were stigmatized at Yale, of course, much of the blame was owed to right-wing figures such as law professor Ralph K. Winter, the Federalist Society eminence who was quoted back then complaining that none of the minority students at Yale were truly qualified to be there.) Still, when Missouri Attorney General (and later Republican senator) John Danforth came to Yale, his legal alma mater, in search of African-American employees for his office, Thomas stepped right up.

Flash forward now to the discussions within the first Bush administration over how to replace Marshall, the liberal lion whose departure provided conservatives with a chance to spin the direction of the court. Every account of those deliberations indicates that Bush and his aides went through a list of potential African-American nominees to the high court -- and rejected politically moderate judges with better qualifications than Thomas, such as Amalya Kearse. They picked him because they had to fill a "black seat" on the court, and because he was prepared to enforce their ideology on the court -- a function he has reliably performed in lockstep with Justice Antonin Scalia.

In other words, Thomas was chosen from a Bush White House shortlist that excluded white males – supposedly a profound sin when committed by the Obama White House in selecting Sotomayor.

Yet the right can never bring its corrosive racial skepticism to bear on Thomas, a man who had proven his willingness to parrot reactionary bromides. He is the single most prominent beneficiary of the quest for diversity in American history, but he is their diversity candidate -- and thus deserved elevation, if not as a distinguished jurist, then because he had suffered discrimination as a conservative.

It is a curious worldview that would validate Thomas and denigrate Sotomayor, when the contrast in their records reflects so well on her and so poorly on him. It is strange, too, that the same conservatives who found the saga of Clarence Thomas and his rise from obscurity so inspiring seem to find no such inspiration in the very similar story of Sonia Sotomayor.

In his memoir, Thomas recalls the innocent delight of old friends and family, who "saw my nomination as an affirmation of the American dream: a poor black child from the segregated South had grown up to become a Supreme Court justice. Who could be against that?" The same question can be turned around now -- with considerably greater justification.