"Drag Me to Hell"

Sam Raimi returns to the gross-out goofiness of his "Evil Dead" days with this brash horror-comedy. 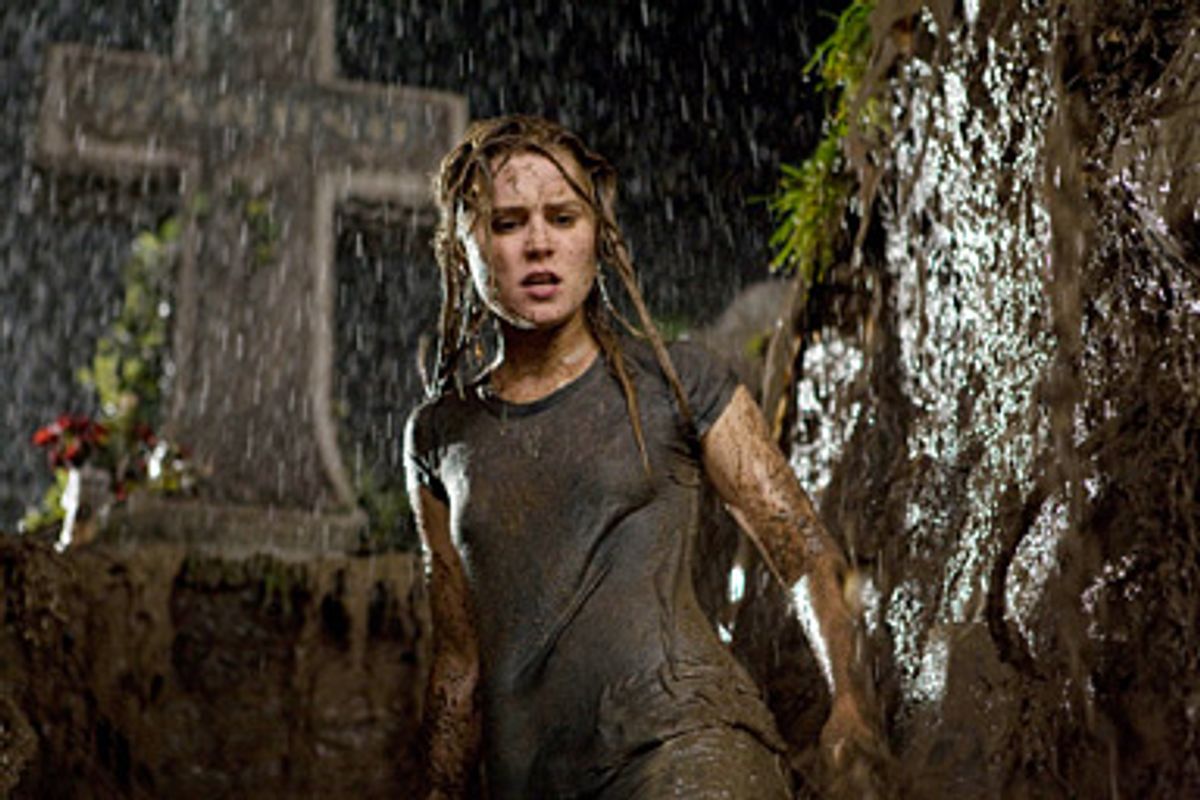 Consider yourself forewarned: Projectile nosebleeds, stapled eyeballs and rivers of green and yellow phlegm flowing forth from unsavory places are just some of the grisly pleasures to be found in Sam Raimi's comedy-horror film "Drag Me to Hell." As Raimi's fans know, long before he became a giant Hollywood player with the "Spider-Man" movie franchise, he made a name for himself with the "Evil Dead" pictures and other assorted B-movie entertainments like "Army of Darkness." "Drag Me to Hell" is a similarly modest project, and it's all the more enjoyable for it. This is a brash, mischievous little number: Raimi (who co-wrote the script with his brother, Ivan) gives his devilish nature free rein. But although "Drag Me to Hell" has its share of violence (the slapstick kind), numerous "jump" moments and a great deal of obviously phony gore, unlike so much contemporary horror, it's devoid of sadism and mean-spiritedness. The looseness Raimi allows himself here results in an especially joyous kind of filmmaking, the sort where the filmmaker's delight in scaring us (and making us laugh) becomes part of the movie's fabric.

"Drag Me to Hell" opens with a flashback to 1969 Pasadena, in which a desperate Mexican couple bring their cursed child to a medium (played by Adriana Barraza), who fails to prevent the lad from being swallowed into the abyss of hell. She vows that someday, she'll get another crack at the demon-spirit who caused all the trouble. Cut to present-day Southern California, where we meet spunky farm girl-turned-loan officer Christine (Alison Lohman). Eager to move past her modest, pig-princess roots, Christine hopes to be next in line for a promotion at her bank. But her boss (played by the fine character actor David Paymer) indicates that a brown-nosing colleague, an Asian-American who goes by the intentionally incongruous name Stu Rubin (Reggie Lee), is most likely going to get the job. Christine, wide-eyed and with a perpetually quivering lower lip, thinks her chances for advancement will be improved if she acts like a tough businesslady. So when an elderly woman with ratted hair and a milky eye (played by the fabulous Lorna Raver) shows up at the bank, begging for an extension on her mortgage payments, efficient little Christine, after weighing the options for all of 20 seconds, tells her no.

And that, of course, is where all of Christine's problems begin, and where all of those disgusting bodily fluids start flowing freely. Not even Christine's sweet, caring, academic boyfriend (Justin Long) is of much use, though he tries. Raimi keeps making the gags broader and broader, as if to see how much he can get away with. And he gets away with just about everything, although cat lovers, in particular, might be dismayed by one scene. (For those who want to keep every plot detail a surprise, the following constitutes a spoiler, so you might want to stop reading here.) Raimi apparently scoured the earth to find the cutest, stripiest kitten ever, only to give him an ignoble end. But even so, Raimi advances through the scene discreetly (nothing happens on-camera). And the idea, writ comically large, is that he's contrasting the kitten's complete innocence -- plus, did I mention, his amazing cuteness? -- with a human character's ugliness and depravity. So Raimi's transgression against kittenkind is forgiven. But just this once.

As for the rest, "Drag Me to Hell" is somewhat plotless, though like many horror movies it does have a strong moral underpinning. As the clueless and, really, not-very-nice Christine learns the hard way, we must treat others with compassion and maintain a sense of humility. Because if we don't, someone's yellowy, oozing eyeball is going to show up in the piece of cake we're trying to eat. If that isn't motivation enough for trying to be a good person, then I don't know what is.