Will the bond market intimidate Obama?

The president's agenda will cost a lot of money. Where will it come from if Treasury can't borrow? 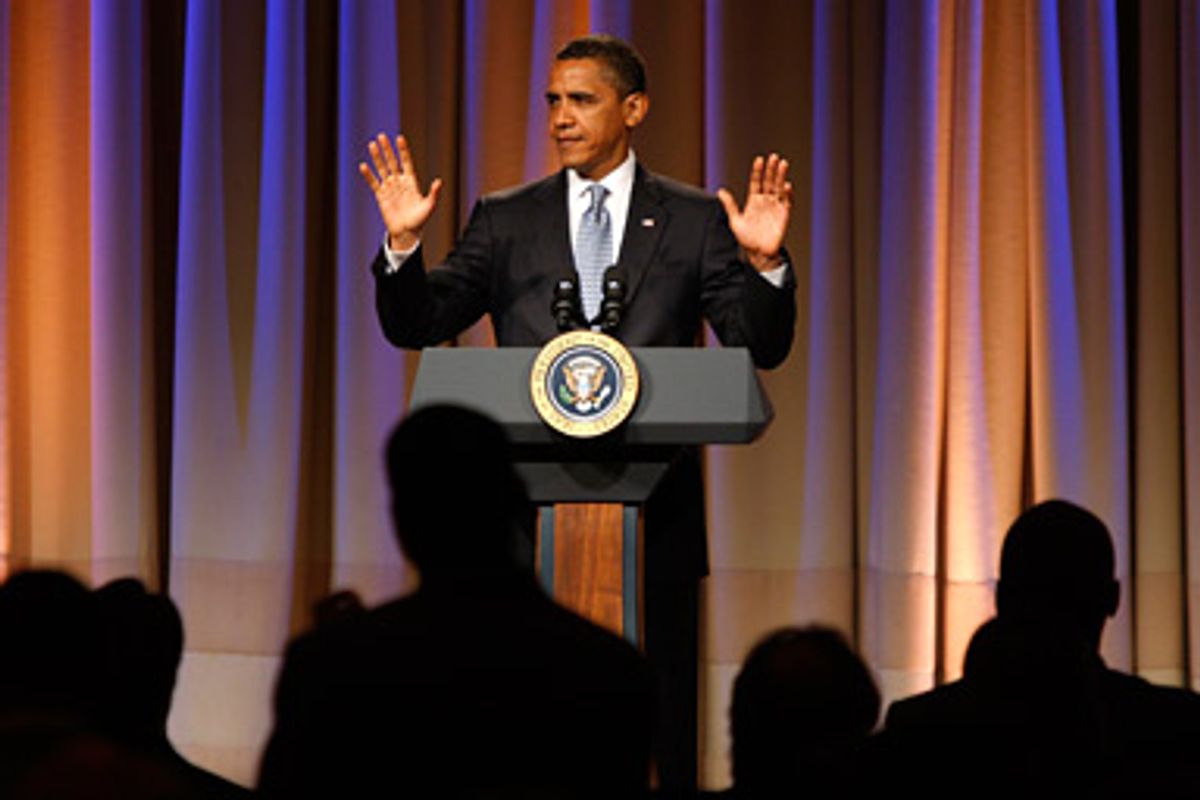 James Carville's famous quote, that if reincarnated, "I would like to come back as the bond market," because "you can intimidate everybody," is getting a lot of play this week. The reason: bond traders are suddenly turning up their noses at long-term Treasury bonds and notes.

The popular explanation for the new-found bond-trader reticence is that they fear that runaway inflation will be the inevitable result of the Obama administration's big deficits and the Federal Reserve's easy, easy money policies. When inflation threatens, you don't want your money sitting in ten-year notes or thirty year bonds. So all the action goes to short term Treasury paper, where you can get in and out before the future turns sour.

With some zigs and zags, that's what's been happening all week long in the bond market -- with an accompanying crescendo of political implications. Republican legislators can complain all they want about Obama's budget but they can't actually do much besides scream "socialism." Bond traders, however, have real power. If they decide not to enthusiastically bid at Treasury's latest auction, thus pushing down Treasury prices and forcing up their yields, the cost of borrowing goes up for the U.S. government. In 2009, the U.S. will need to raise an incredible $3.25 trillion dollars to pay for various wars, bailouts, stimulus plans and assorted goodies. If the cost of raising a significant proportion of that money from selling Treasury paper rises too far, the Obama agenda could be crippled.

So the bond trader "vigilantes," as a Bloomberg News story puts it, are now on the warpath. Obama, Geithner, Bernanke, Reid and Pelosi -- prepare to be scalped!

Edward Yardeni, head of Yardeni Research: "Ten trillion dollars over the next 10 years is just an indication that Washington is really out of control and that there is no fiscal discipline whatsoever."

Mark MacQueen, a partner and money manager at Austin, Texas-based Sage Advisory Services Ltd: "This whole idea that we need to spend our way out of our problems is being questioned."

In his New York Times column today, Paul Krugman pushes back against the idea that inflation is a threat we need to be worrying about right now. Brad DeLong echoes him, stressing that, so far, there is nothing going on in the bond market worth writing home about.

Thus any argument that begins: "financial markets are nervous about the U.S. long-run budget deficit..." needs to be thrown out the window.

It is true that inflation is not currently a problem, and that, by historical standards, the yield on 30-year bonds or ten year notes is not shockingly high. Quite the opposite. Both are below the average recorded for the last ten years. So it's not hard to jump to the conclusion, as partisans on the left are quick to do, that any interpretation of rising long-term bond yields as a referendum on Obama policies is just political demagoguery.

It is also true, as the Obama administration and the Fed have been hinting, that the current pattern in bond interest rates (short term bills low, long term bonds high, thus giving us what bond-market watchers like to call an "upward-sloping yield curve") is just what you'd expect if the economy was set to grow. So it's a good thing, a sign that traders aren't as petrified by the prospects of imminent doom as they were a month or six months ago. They are now willing to take their money out of the safest possible haven and invest it in slightly riskier assets.

But we should be careful about the dangers of generalizing from the present. That's behavior the last administration was overly fond of -- harping on today's economic statistics to tell us everything was just fine and dandy, while long term trends and dysfunctionalities were sending clear signals of disaster. The question we should be wondering about isn't whether this week, bond yields are still historically low, but whether the rate at which they rose this week will continue next week and the next week after that. And so on. Because at some point it becomes a real problem. Getting the economy going, reforming health care, improving education and revamping our energy infrastructure will cost a lot of money. Right now, borrowing the cash is our only option, and if the cost of borrowing rises too high we will be in a world of hurt.

So while we shouldn't be panicking at the browbeating rhetoric of the bond-market vigilantes, we should definitely be paying attention. I don't think Obama and Bernanke will be intimidated as easily as Clinton was -- the stakes are far greater today, and the perils we face far more desperate -- but each time the Treasury auctions another round of bills, notes, or bonds, we learn something very concrete about the present, and the future, that should not be ignored, or cavalierly dismissed.

How The World Works Inflation