"If we kill schoolgirls, you shouldn't be surprised"

Responding to threats from the Taliban, at least 10 girls' schools have shut down in northern Afghanistan. 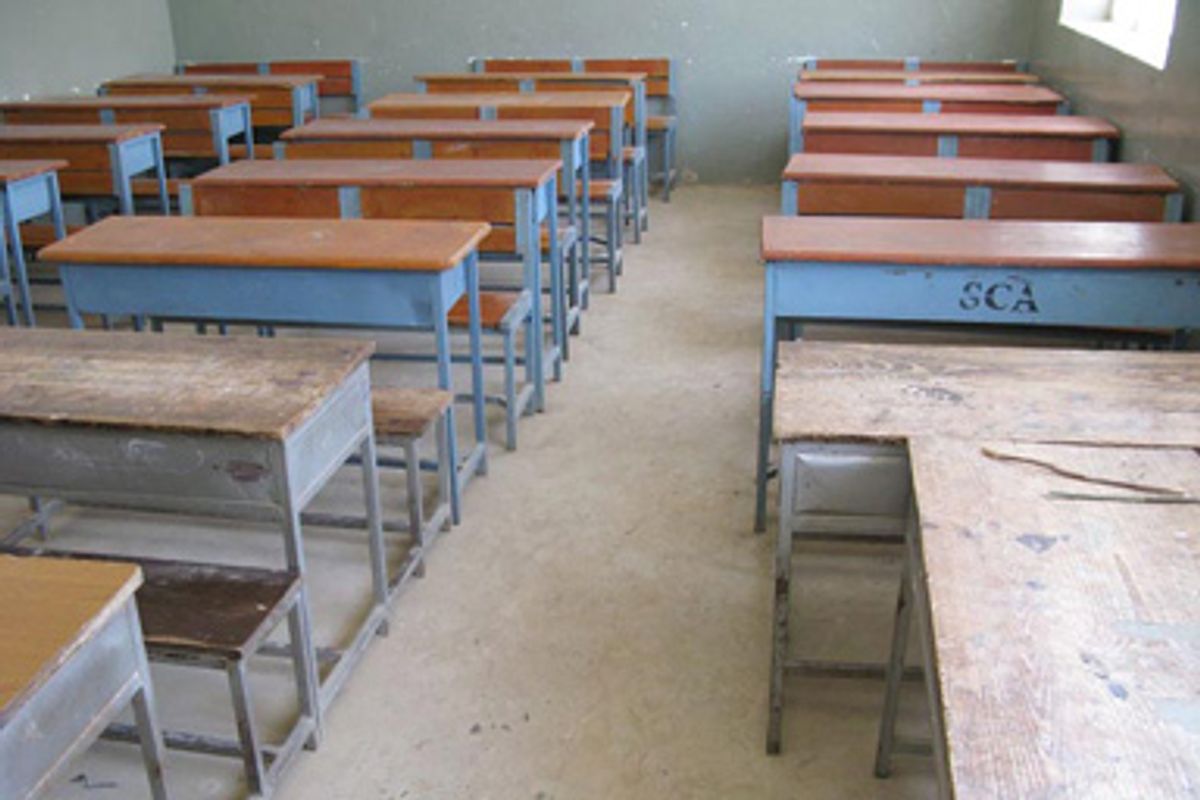 An empty classroom at the girls' school in Aqtash. Once the threats started coming, parents stopped sending their girls to school.
--

When the deputy director of Aqtash High School talks of the government, he isn't referring to Hamid Karzai's central government in Kabul. Nor does he refer to the provincial administration in Kunduz. "The Taliban are our government," Bashir says. "They have taken over our region, their commanders give the orders here."

Bashir is standing in a dusty classroom on the ground floor of his modern school, roughly half an hour from Kunduz by car. As recently as just one month ago, he says, some 400 girls were still coming to the school in three daily shifts to learn reading, writing and arithmetic. Figures and formula are still scrawled across the blackboard.

But now, the girls' classrooms have been left to deteriorate. The desks and chairs are still laid out in neat rows, but a film of dust has collected, and Bashir stands helplessly in the middle of the room. "Parents in Aqtash are afraid to send their girls to school anymore, after the death threats," he explains. The school director speaks quietly and carefully. He too is afraid, and several of his teachers double as informants for the Taliban. The bearded fighters, he says, would certainly not like it if they knew a reporter was at the school in Aqtash. "You should leave quickly if you want to get out of Aqtash alive," he whispers.

Bashir's warning is hardly an exaggeration. Not 30 minutes after our arrival in Aqtash, located 15 kilometers northeast of Kunduz just off the main north-south arterial, a group of a dozen Taliban fighters, armed with AK-47s, gathers in front of the blue arch at the entrance to the school. "What do you want here?" one of the fighters calls. "This is our region, the Islamic Emirate of North Afghanistan."

The trip to the Aqtash school is a trip into the heart of the empire of the Taliban, which controls large areas around Kunduz. Minutes pass before the fighters clear out of the way, allowing us to leave.

The trip out of Aqtash is hardly any less dangerous and provides a look at the situation not 15 kilometers from the German military camp in Kunduz. There are Taliban checkpoints all over the roads, and they are well armed. The Taliban commander in the region is a man named Khalid Salim. He is young and has a reputation for brutality. Salim is on the most wanted list for the region surrounding Kunduz. "Those who work for the government or for the Western soldiers," says one of his men at a checkpoint, "are immediately apprehended and killed."

The fate of the school in Aqtash, which received a new roof just one year ago, paid for out of German development funds, is hardly unique. At least 10 girls' sections of schools located near Kunduz have been closed down in the last three weeks after receiving threats from the Taliban. Parents simply stopped sending their children to school because of the danger. And the closures haven't just been in the region of Char Dara southwest of Kunduz, a well-known Taliban hot spot. Schools in three other districts have likewise ceased operation.

It didn't take long for news of the school closures to reach the highest echelons of government in both Kabul and Berlin. Stories about schools buckling to the Taliban are exactly what they hoped to avoid. On the one hand, it shows that the Taliban is increasingly gaining the upper hand right outside the front gates of the German military camp in Kunduz. Neither the German army, the Bundeswehr, nor the local police force are effective against the Islamist extremists. At the most, they can temporarily dislodge the Taliban, but they then move on to terrorize other areas where there are no German soldiers.

Most of all, though, the closures threaten one of the few successes that the Germans have had in Afghanistan. It is an achievement that has been repeatedly trumpeted by those in favor of continued engagement; hardly a German politician has refrained from mentioning how encouraging it is to visit a girls' school in Afghanistan. Now, though, the schools -- just like in the south where recent acid attacks against schoolgirls have hit the headlines -- have become a potent propaganda tool for the Taliban. Western troops, so goes the message, can't do anything to stop the Islamist fighters.

The tactics used by the Taliban are shockingly simple. Dozens of so-called night letters, which are affixed to the doors of schools in the dead of night, are piled on Muqim Halimi's huge desk. Halimi is the commissioner of education for the Kunduz province and a crowd of men are waiting outside his office, most of them hoping to be able to bribe their way into good grades for their children. But when Halimi hears that a German reporter wants to talk about the closure of the girls' schools, he clears the room so he can talk undisturbed.

After confirming the closures, he reads aloud from the Taliban night letters, as simply formulated as they are explicit. "As of today," he reads from a message from Aqtash, "girls are no longer allowed to attend school." The letter is marked with a logo of the Islamic Emirate of Afghanistan -- in English, yet another indication of just how well organized the Taliban are in the German area of operation.

Another threat letter depicts a schoolgirl at the gallows. "We have warned you," reads the message. "If we now kill schoolgirls, you shouldn't be surprised."

Halimi is open in his description of the precarious situation the schools find themselves in. "There is no police there and even the army is afraid to go there," he says. "What should I do, as a civilian, against the Taliban?"

Alarmed about the reports, Afghan Interior Minister Hanif Atmar has rebuked the Kunduz police chief over the phone. The school closures are a "disgrace for Afghanistan," he says, demanding that something be done. But police chief Abdul Racak also doesn't know what to do. Last week he tried to send a police patrol to Aqtash, but they came under fire almost as soon as they turned off the main road. Two police officers were killed in the attack.

The reaction from the German camp in Kunduz is also a mixture of dismay and helplessness. The security situation is so poor at the moment that neither the military nor their civilian assistants can visit Aqtash themselves. Realistically, though, there isn't much they can do to combat the threats of the Taliban. There are some 650 schools in the region surrounding Kunduz and the German theater of operation is almost the size of the U.S. state of Massachusetts. With a German contingent of just 667 soldiers, security simply cannot be guaranteed.

Reports about the closures of the girls' schools aren't the only indications that the Kunduz region is at risk. The German military has noted that the Taliban threats began at the exact same time as attacks against German soldiers began to increase in both number and sophistication. Since the end of April, 19 patrols have come under attack, with one soldier losing his life in an April 29 attack. So far in May there have been four well-organized assaults with soldiers wary that the next one could come at any time. Nobody believes that the correlation between the school threats and the attacks is a coincidence.

The reaction to the threats has become almost routine in recent months. The Afghans, so goes the formula, have to use their army to establish security in threatened areas like Aqtash. The Germans have held talks with their Afghan partners in the hopes that they will launch an offensive in Aqtash. German troops will support the operation, but Afghan troops should be the ones at the front.

But it would surprise no one were further girls' schools to shut their doors by the time such an operation is launched.

Still, the news isn't all bad. At the girls' school in Qosh Tappeh, likewise near Kunduz, the school director, a veteran of the mujahedeen, took things into his own hands. When the Taliban showed up to his school for the second time to present their threats, he found a uniquely Afghan solution to the problem. He told his visitors that, when it comes to fighting to the death, he is much more experienced than they. Should they like to find out for sure, he offered, he would be happy to accommodate them.

His threat seemed to have worked. The girls in Qosh Tappeh continue to attend school.