Pixar's latest is bursting with charming visual touches and life-affirming messages, so why does it feel so cold? 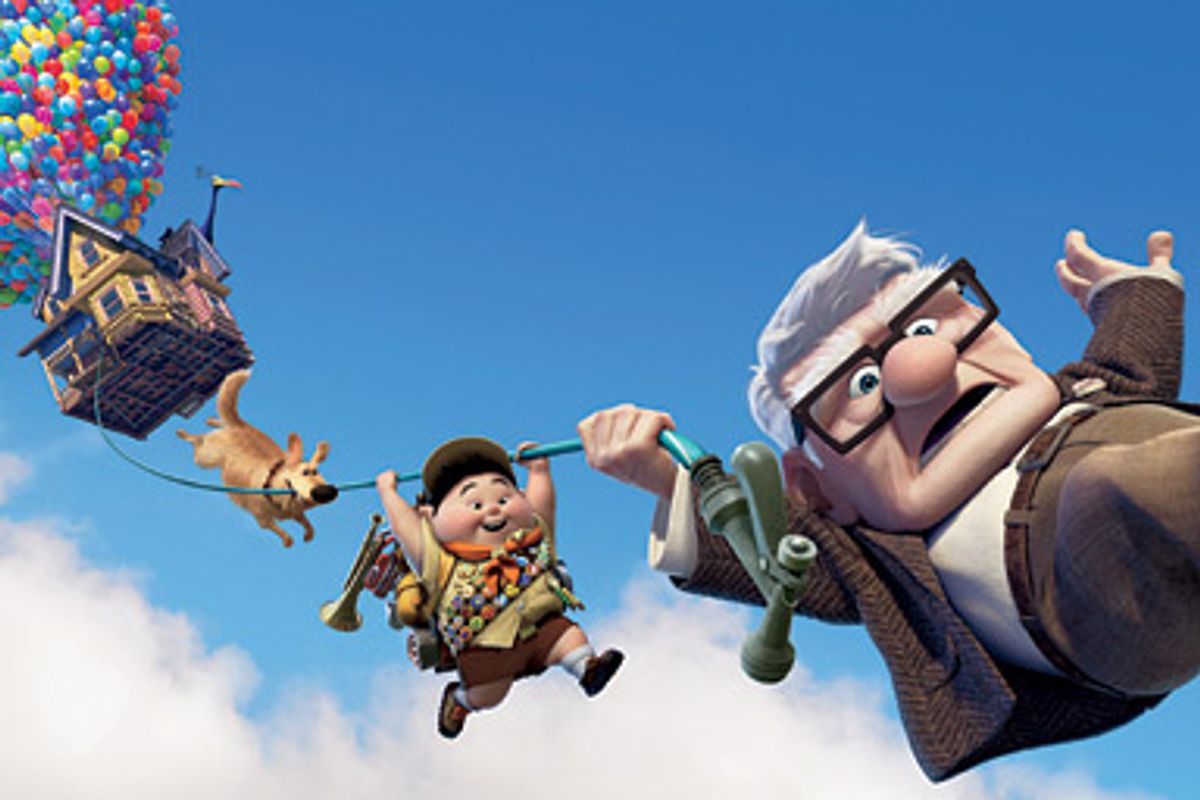 There are so many charming visual touches in Pixar's "Up" -- like the homey-looking wood-frame house that floats into the sky with the help of a thousand translucent candy-colored balloons -- that, frame by frame, the movie seems to be daring us not to fall in love with it. The characters may not tug at our heartstrings outright, but they do surreptitiously plink away at them: The lead character, Carl Frederickson (Ed Asner), is a square-headed, gruff little old man, a former balloon seller who's grieving over his wife's death; Russell (Jordan Nagai) is the tubby, not-very-bright but well-meaning Boy Scout who at first annoys Carl and then becomes his sole friend. Together, Carl and Russell find an adventure -- or perhaps the adventure finds them -- and learn that we can't always know what to expect out of life.

"Up" is unapologetically life-affirming, for those who like to have life affirmed. And from a technical standpoint it certainly is beautifully executed. But save for a few inspired canine gags and a handful of very pretty visual details, "Up" left me cold. Its charms appear to have been applied with surgical precision; by the end, I felt expertly sutured, but not much else.

I'm sure that's not the effect the film's directors, Pete Docter and Bob Peterson, were going for. Docter co-directed "Monsters, Inc." and was one of the writers of "Wall-E"; Peterson is a Pixar vet who was one of the writers of "Finding Nemo," and who also worked on the screenplay for "Ratatouille." (He's also the writer of "Up.") Everyone at Pixar, from its writers and directors to its expert army of animators, knows exactly what he or she is doing. And in "Up," that shows -- too much. The picture opens with the back story of Carl and his wife, Ellie: They meet as children, in the '30s, and became fast friends, united by their taste for tales of adventure and derring-do. (Little Ellie shows Little Carl a map and points to the spot she dreams of seeing, a secluded locale in South America. "It's like America -- but South," she explains helpfully, an example of the movie's kids-say-the-darnedest-things dialogue.) Carl and Ellie grow up, fall in love and get married. A wordless montage tells the story of their life together, including their inability to have a child. But the two are very close, taking great pleasure in each other's company despite the usual setbacks of life (and their failure to make it to that South American dream spot, aptly named Paradise Falls). Just as Carl decides to go ahead and book the tickets -- by now the two are entering their golden years -- Ellie falls ill and dies. Carl is left alone, a grumpy old man, trying to hang onto the house he and Ellie lived in and cared for during their years together, even as nasty developers try to seize control of it.

Carl won't let the suits get the better of him, and that's where that floating house, held aloft by balloons, comes in. The Boy Scout, Russell, infringes on Carl's plans, but the two forge an uneasy alliance, and their undertaking involves a gawky but resplendent bird of paradise, an encounter with one of Carl's childhood idols (voiced by Christopher Plummer) and the eager friendship of a talking dog named Dug (Bob Peterson supplies his voice).

"Up" deals with adult ideas in ways that children can accept: It's all about dreams deferred, the loss of loved ones and the way disappointments sometimes reveal hidden opportunities for happiness. But as great as all of that sounds, "Up" has the quality of a vacation package masquerading as a journey. Everything in it seems meticulously calibrated to get an effect out of us, to return us to a supposedly desirable childlike state of innocence: Carl is cantankerous, not too cuddly -- at least until the very end, when we get the payoff of seeing him transformed into a caring human being. The music, by Michael Giacchino, has a forced airiness, as if in imitation of Nino Rota. And we're treated to many, many shots of those floating polychrome balloons (even when they become semi-deflated, they're still at least vaguely hopeful-looking), universal symbols of the alleged supremacy of childhood. In the world of "Up," being too grown-up is never a good thing: The vision of Carl and Ellie's marriage, which consists largely of their beaming at one another, holding hands and having picnics, even well into old age, looks more like a denture adhesive commercial than a real romantic partnership.

Yet this is what passes for love in "Up." It is, after all, a cartoon -- the filmmakers can't be throwing too much complicated, real-life stuff in there, aside from comforting platitudes along the lines of "It's the journey that matters, not the destination." There are certain aspects of "Up" that did tickle me: the way Dug expresses his doglike thoughts in the most direct way possible ("My name is Dug! I have just met you and I love you!"); the chiffon translucence and gently shifting colors of the bird of paradise's feathers, a lovely effect unlike anything I've ever seen in an animated picture (nicely enhanced by the movie's use of 3-D, though I suspect it's equally effective in 2-D). But like so many of the other Pixar movies, "Up" is rendered in broad brushstrokes of faux naiveté that make me uneasy. "Up," like "Wall-E" and "Cars" before it, pretends to scoff at sentimentality, when all it's really doing is dressing it up in self-awareness. I come away from most of the Pixar films, this one included, feeling that the filmmakers have taken too many of their cues from Charlie Chaplin and not enough from the drier, less-needy Buster Keaton.

Brad Bird is the notable exception: I see his 2004 "The Incredibles" and the 2007 "Rataouille" as the real jewels in the Pixar crown. It's universally accepted that there's a Pixar "sensibility" -- that is, after all, part of the mythology the company has created for itself. John Lasseter, the chief creative officer of Disney and Pixar, has noted in interviews, for instance, that all of the company's work has been directly or indirectly informed by the work of Japanese animator Hayao Miyazaki. But Bird's movies for the company bear a stamp of individuality that I don't see in the others. They have lofty, grown-up ideas behind them: "The Incredibles" deals with the seeming paradox that we feel the greatest love for our fellow human beings because of their flaws, not their attributes; "Ratatouille," a story with a rat chef as its main character, gets at some pretty complicated notions of the meaning art can have in our lives.

But Bird's great gift is his light touch, even in the face of the magnificent technology at his fingertips. (That touch was evident even in his early masterpiece, "The Iron Giant.") "Up" is hardly an offensive picture -- at worst, it's simply innocuous, and at best, it's very, very pretty to look at. But just as those lighter-than-air balloons must support the groaning weight of a house, "Up" works hard to carry its vision of seemingly weightless innocence. This return to childhood comes with many, many strings attached.