Salon published many of the shocking images now being discussed in news reports three years ago. 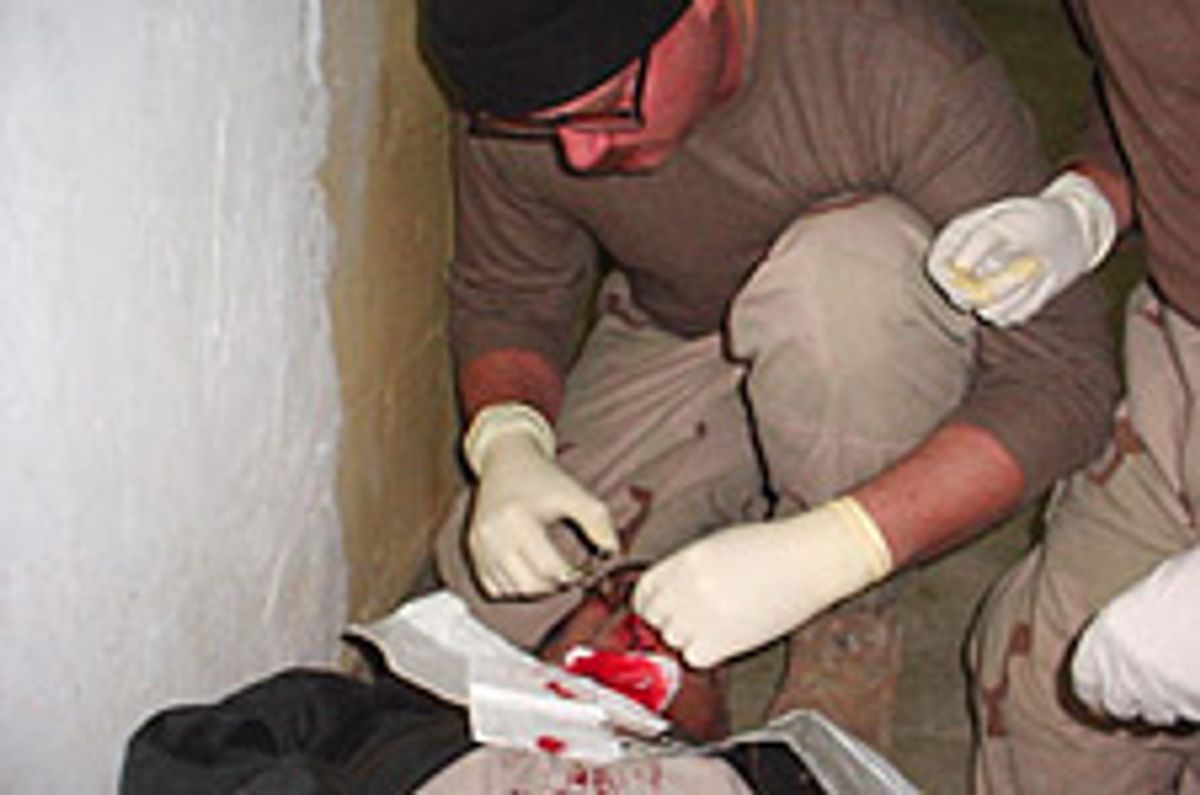 5:17 p.m., Nov. 14, 2003. CPL GRANER applies sutures to the chin of a detainee. This detainee is suspected to be the General that SPC HARMAN stated in her statement, that CPL GRANER pushed into wall. SOLDIER(S): CPL GRANER; SGT WALLIN

A report that the photos President Obama recently decided to withhold from the public depict the rape and sexual abuse of detainees at Abu Ghraib and other prisons in Iraq and Afghanistan was in error, Salon has learned from the man named as the source for the story. Maj. Gen. Antonio Taguba, who was cited by the United Kingdom's Daily Telegraph in its initial article, told Salon's Mark Benjamin that he has in fact not seen the pictures in question. (You can read Benjamin's report on his conversation with Taguba here.)

One other article about the content of the withheld photos appears to be erroneous as well. On the Daily Beast, Scott Horton wrote:

A senior military officer familiar with the photos told me that they would likely provoke a storm of outrage if released. The well-informed source confirmed, just as reported in the Telegraph, that many of the photographs are sexually explicit. The photographs differ from those already officially released ... In one, a female prisoner appears to have been forced to expose her breasts to be photographed. In another, a prisoner is suspended naked upside down from the top bunk of a bed in a stress position ... In one withheld photograph, not previously described, Specialist Charles A. Graner, Jr., an Abu Ghraib guard, is shown suturing the face of a prisoner, a reliable source tells The Daily Beast. The suturing appeared to serve no ostensible medical purpose than perhaps Graner’s attempts to humiliate or terrorize the prisoner, the source suggested.

As I noted in a previous post, however, many of the images Horton wrote about were published by Salon in 2006. The photo of Graner applying sutures to a detainee's face that Horton says was "not previously described," for instance, appeared in Salon in 2006 and accompanies this post. The photo of the female prisoner exposing her breasts was also published by Salon; it can be seen here. The same prisoner is seen in other photos that Horton described as "suppressed." The picture Horton wrote about of a prisoner hanging naked and upside down from a bed is available here; the detainee was not in a stress position as reported on the Daily Beast but was mentally disturbed and had done that of his own accord.

In a letter he wrote in response to my post, Horton said:

My story notes in fact that the photos were previously published by Salon and other sources, and provides a link to the sites where they have been archived. This is not a question about "new" materials, because the materials in question have been circulated since roughly February 2006. The focus is on the Pentagon's pushback and denials when in fact many of the materials described have been published already and corroborated ... The question we come to here is what the remaining 44 plus a "substantial number of additional photographs" are that are being held back. Obviously only the Pentagon lawyers know what these photographs are. But the descriptions the Telegraph got tally with those I got from senior military sources, and yes, the images are largely images we have seen before and not something new. But this doesn't explain why they're being withheld--just the contrary.

But the photos that were published by Salon are not being withheld. In fact, since shortly after they first appeared on Salon, the pictures have not been part of the American Civil Liberties Union lawsuit that the Obama administration is fighting -- as a result of the images' publication, the government officially released them. A copy of the order outlining an agreement between the ACLU and the government to dismiss the government's appeal and release those photos can be downloaded in PDF form here.