The singer escapes "Britain's Got Talent" with her soul intact, perhaps the greatest feat in this twisted age 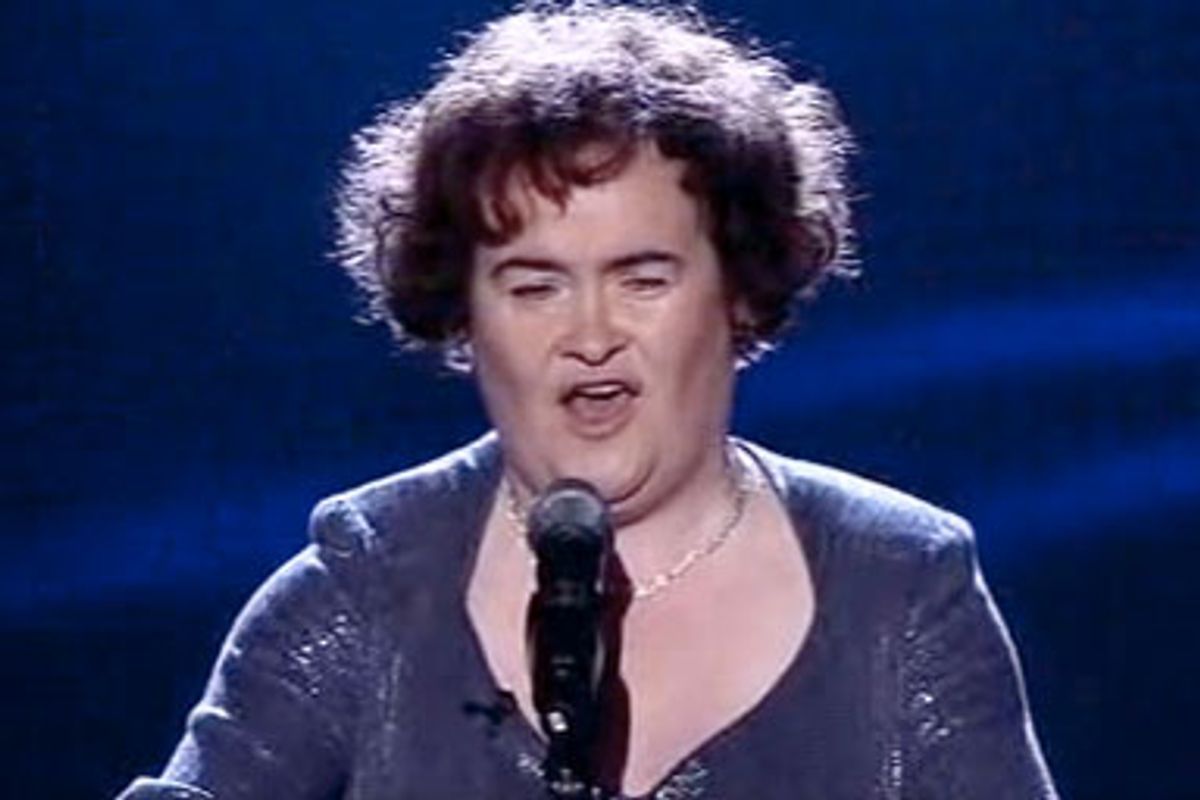 Most of the time, I feel certain the Internet is bad for us: making productive work impossible for hours on end, reducing our attention spans to three seconds, splintering our minds into tiny pieces, pieces that have no way of pondering the big picture and no means of touching the soul of any matter, outside of the occasional confused haze of ambivalent emotions.

Somehow, Susan Boyle's odd cocktail of awkwardness and transcendent talent pierced through the stampede of blurbs on unfaithful Jon and controlling Kate and where A-Rod or Gisele or Suri are buying their groceries these days. And even those of us skeptical of the biggest thing since Octomom found ourselves weeping into our hands to the sweet strains of "I Dreamed a Dream."

But sadly, just as the instant international fame and glory of YouTube giveth, the negative scrutiny and skepticism of overnight superstardom taketh away. Boyle was only acceptable to us, as a phenomenon, when she was a grateful, humble, double-chinned cat lady. The second she expressed the faintest whiff of a real personality, behaving like an actual human being who might dare to express anything but gushing appreciation for the world's pushy, insistent questions and relentless curiosity, she was seen as a diva. She reportedly spewed a string of expletives! She supposedly threatened to quit the show! Why? Because she was spoiled -- overnight! -- by the world's collective fawning attentions! How dare she!

The truth is that immediate fame immediately lands you in a world of pain. We lay the golden crown on your head, then promptly wheel out the guillotine and unceremoniously chop it off.

And on Saturday night, when Boyle lost to the dance group Diversity, who among us didn't study her face and discover a faint look of relief? You could almost see her relax on the spot from the realization that she might be cast back into the sweet, forgiving darkness whence she came.

Yes, the celebrity cycle has finally sped up to such a head-spinning extent that we can find ourselves loving an unlikely vocal star for her clumsy charm one minute and then condemning her for being a regular, flawed human being made uncomfortable by the unflattering glow of the limelight the next. Boyle might be slightly shy and naive, but the moment that her runner-up status was solidified, she was released from the death grip of our collective skeptical gaze, free to once again become the sentimental underdog we fell in love with. Like Adam Lambert, who is reportedly coming out on the next cover of Rolling Stone, Susan Boyle could ditch the undying appreciation routine and be her own lovably odd self once more.

In our minds -- and by "us" I refer to the people of the earth, at this time in human history, when it's possible for the earth's people to rally behind one person, via YouTube, in a matter of hours -- Boyle would only keep our blessing as long as she was gawky and underrated and appreciative of whatever little crumbs we, the world's people, were willing to throw her. At least as runner-up, she could once again be the bumbling charmer -- shunned, disappointed, yes, but not a lamentable diva.

But then, aren't we eager, in our envious anonymity, to transform every popular human being into a self-important ingrate? Susan Boyle greeted our adoration with a confused haze of ambivalent emotions, and we hated her for it. At the bewildering height of the information age, we've evolved into unsteady creatures whose sentimentality sours to vengeance in seconds; we bless our brand-new creations with tears of joy, then promptly eat our young.