Now that you and I own GM, perhaps it's time to relaunch a very old concept -- a special kind of public corporation 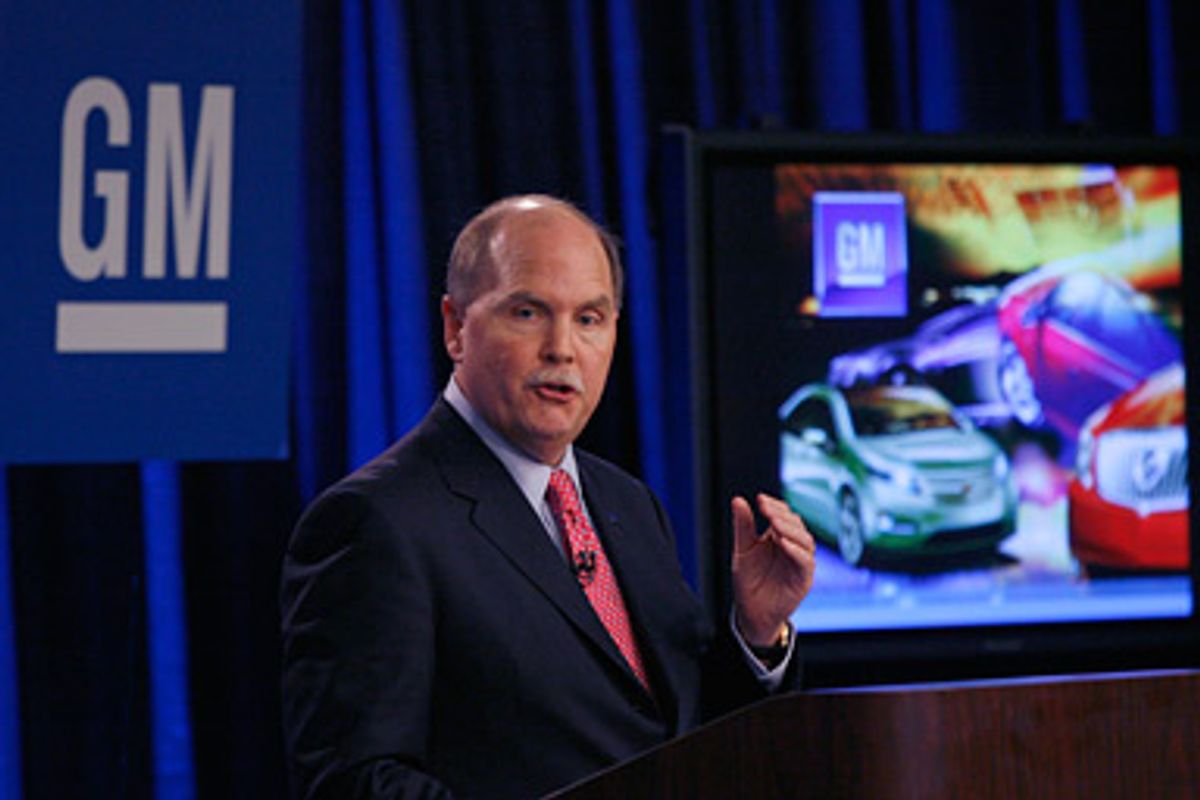 General Motors CEO Fritz Henderson speaks at a news conference following GM's bankruptcy filing in New York, June 1, 2009. General Motors Corp filed for bankruptcy on Monday, forcing the 100-year-old automaker once seen as a symbol of American economic might and dynamism into a new and uncertain era of government ownership.
--

Or is it? The truth is that corporations in the U.S. and other countries have always been quasi-public entities chartered for public purposes. You would never know this from corporate propaganda that treats giant, multinational corporations as though they were simply giant versions of sole proprietorships or partnerships. But history and law alike make it clear that today's large corporations, like automobile manufacturers, are much more like spun-off government agencies than like large-scale lemonade stands.

Go back in time before the mid-19th century, and you don't find large private corporations of the modern kind. The only giant enterprises with private financial participation tended to be state-chartered monopolies, including trading companies like the British and Dutch East India Companies, and corporations chartered by government to provide public goods like toll roads or canals or banking. These quasi-public entities were less like modern corporations than like public utilities or modern contractors -- private, for-profit companies delegated the responsibility of carrying out certain public economic functions.

Up until the second half of the 19th century, in the U.S. as elsewhere, governments kept corporations on short leashes. Typically corporations had to be chartered by an act of a state legislature or the federal government (as, for example, in the case of the First and Second Banks of the United States). In many cases, the corporate charter was only temporary and had to be renewed periodically by new legislation. In addition, corporations generally were limited to a single purpose -- building a bridge or a canal, say -- and forbidden to engage in other commercial activities.

In the second half of the 19th century, the modern "general corporation" was invented in Britain and the U.S. Today general corporations can be formed by mere registration; no longer does a state legislature or Congress have to pass a separate bill chartering each individual corporation. Not only are corporations easily formed by registration, but they are also immortal, unlike the companies of the early modern era, which had to have their charters renewed by lawmakers (a practice that encouraged political corruption).

Another characteristic of the modern general corporation, limited liability, also became widespread. Whereas sole proprietors and partners in partnerships are liable for the debts their businesses incur, shareholders of a general corporation are liable only up to the amount of their investments in the business. If a company fails, the creditors cannot go after all of the personal property of the shareholders.

A final change involved the purposes of corporations. Unlike in the past, when a company chartered for a particular purpose could not engage in activities outside its line of business, today there are few limits under law preventing companies from moving into new lines of business or merging with corporations in other economic sectors.

The shift from legislatively chartered, temporary, single-purpose corporations to registered, immortal, multipurpose corporations has been beneficial for the economy in many ways. The most important result is that great numbers of individual and institutional investors, shielded from excessive risk by limited liability laws, have been willing to pool capital in the vast amounts needed to achieve economies of scale in many industrial corporations like the automobile companies.

However, the increasing flexibility of incorporation has come at the price of a clear link between the corporation and the public interest. That link was clear in the early days of the chartered corporation, when Illinois, say, would charter a temporary state turnpike corporation. Either the turnpike was built or it wasn't. It is far from clear that the people of Delaware benefit from the fact that roughly half of all Fortune 500 corporations register in that state to take advantage of its lenient incorporation laws. The social contract between the chartering government and the chartered corporation breaks down entirely when governments like those of Caribbean tax havens are mere flags of convenience for entities whose shareholders, managers, employees and customers are abroad.

Ever since incorporation laws were liberalized in the late 19th century, the federal and state governments have tried to modify corporate behavior by means of regulations and tax incentives. Having unleashed the large and useful but potentially dangerous animal, they sought to threaten it or coax it rather than to put the leash back on.

Now the partial nationalization of GM and other bailed-out enterprises by the U.S. has unexpectedly provided a third form of leverage over those entities, in addition to regulations and tax incentives -- namely, public ownership. If the U.S. is the controlling owner of a company, it can make the company do whatever it wants, from modifying executive compensation to honoring union contracts. But this kind of public leverage is limited to a few bailed-out companies and banks and will vanish as soon as they are reprivatized (there is no significant constituency for permanent public ownership of major industrial or financial concerns in the U.S., other than government-sponsored entities like Fannie Mae and Freddie Mac).

Following the present emergency, it is likely that those who want to reform corporate America for a variety of purposes will once again be tempted to rely solely on the tools of regulations and incentives. But we should at least consider restoring an old tool to the toolkit: the chartering of specialized corporations for specialized purposes.

For example, if we want to have a domestic automobile industry, why not charter companies specifically for that purpose? Other goals like high wages for employees or reasonable executive compensation could be pursued by corporate charter reform, rather than tax breaks or regulations.

This idea is not unheard of. Back in 1996, Senator Jeff Bingaman (D-N.M.) and Senate Minority Leader Tom Daschle (D-S.D.) proposed creating a new kind of corporation, the "A Corporation," in addition to the present general or C corporation and the S corporation (in which individual shareholders are assessed taxes for corporate profits rather than the corporation as an entity). In return for favorable federal corporate income tax treatment and streamlined regulations, the A-Corp would promise to locate half of its new investments or jobs in the U.S., provide portable worker pensions and employee training, negotiate agreements with local communities, and undertake other obligations.

The Clinton administration ignored the proposal, sponsoring instead a "corporate citizenship" campaign that was merely a toothless exercise in PR. As it was, the original A-Corp proposal was so overloaded with complex requirements that it was probably doomed from the beginning.

Nevertheless, the idea of chartering particular kinds of private corporations for particular public purposes is a good one that deserves to be revived. Imagine a USA Corporation, which pays a lower corporate income tax, or perhaps no corporate income tax, in return for locating most of its value-added production in the United States (the economist Ralph Gomory has proposed a similar deal through the tax code). USA Corporations could be chartered only by the federal government, in order to prevent a race-to-the-bottom in standards among American states (yes, that means you, Delaware). The chartering could be done by simple registration with the federal government; separate bills before Congress would not be necessary. And if Goldman Sachs could convert itself into a bank holding company, then existing general corporations should be allowed to convert themselves into USA Corporations, if they were willing to fulfill the requirements.

Would the USA Corporation run afoul of international trade and investment liberalization? Not necessarily. Foreign-based multinationals like Toyota and BMW, provided that they located high-value-added production in the U.S., could own their own USA Corporations and repatriate their profits. And there would be no discrimination among foreign and domestic investors. Indeed, one of the goals of the USA Corporation would be to increase foreign direct investment in building up America's domestic productive capacity.

New kinds of corporations also could be chartered for other purposes, such as nursing or janitorial companies that receive tax and regulatory breaks in return for paying higher wages and permitting unionization. America's financial sector has always been characterized by a diversity of forms, from retail banks and investment banks to thrifts. There is no reason why our large-scale corporate landscape has to be limited so much to general corporations.

The power of ownership that the American people now wield in the case of GM and other corporations is both limited and passing. But the power to charter corporations for the purposes we choose and in the forms we prefer will always be a power we wield as a sovereign people. We the people should think about using our power.