The Vermont senator says Sotomayor attacks are "vicious" and "outrageous." But the GOP may well "Bork" itself. 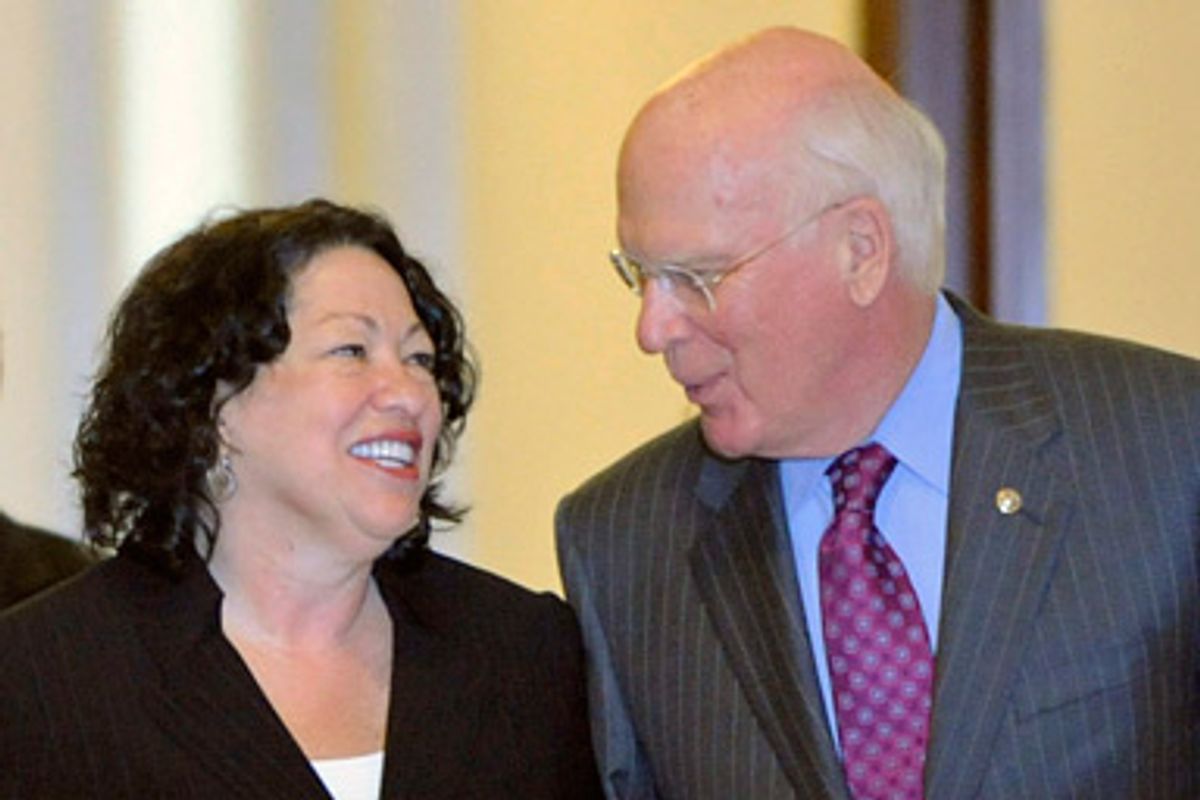 Senate Judiciary Committee Chairman Pat Leahy (D-VT) (right) walks with US Supreme Court nominee Judge Sonia Sotomayor (left) before meeting in his office at the US Capitol in Washington June 2, 2009.
-- Bravo, Pat Leahy. The chairman of the Senate Judiciary Committee succumbed to an outbreak of passion and candor today, fiercely defending Supreme Court nominee Sonia Sotomayor from personal, fact-free right-wing attacks. Leahy called the assault on Sotomayor "unbelievable" and "vicious," and pledged to move up her confirmation hearings – Republicans want to delay them, to have more time to scrutinize her record -- if the attacks continue.

"I'll tell you one thing that will motivate me to go sooner, rather than later," Leahy said, according to Mike Madden. "When you have vicious attacks by leading Republicans call her the equivalent of the head of the Ku Klux Klan, and call her a bigot, totally false and outrageous charges, and there's only one place she can answer those charges would be in a hearing, we want her to have a chance to answer those charges."

On "Hardball" today, Pat Buchanan said he agreed the right should "stop the name-calling" -- that's the same Buchanan who's called Sotomayor an "affirmative action pick," "a lightweight" and "an anti-white judge," and mocked her for mastering English by reading children's books while in college. Now Buchanan says conservatives should stop the slurs and instead focus on her "long record of race-based justice."

Buchanan's attack illustrates the fact-free nature of the right's assault on Sotomayor, because, of course, he can't name one case in which she made a race-based decision, except to cite the vexing complaint of Frank Ricci in New Haven. In that case, Sotomayor was part of a majority that voted not to hear the case, upholding the city's findings and a lower-court decision -- a relatively conservative, status-quo judicial move, not at all a radical or race-based stance.

In fact, as Tom Goldstein reported on SCOTUSblog, a survey of Sotomayor's rulings in 96 race-discrimination cases showed her voting against the plaintiff 80 percent of the time. And of the 10 cases where she did side with the plaintiff, nine decisions were unanimous. Glenn Greenwald himself has focused on two specific cases where Sotomayor made decisions that should make Buchanan smile: ruling against Glenn's own client, a sympathetic African-American nurse suing a hospital (and a later court decision actually found for Glenn's plaintiff with a seven-figure award), and the case of a white New York Police Department desk worker who was fired for using racial slurs in work e-mails. (Sotomayor dissented in that case, siding with the white employee and finding his First Amendment rights had been violated by his firing.)

Any cursory review of Sotomayor's judicial record shows she is not an ideologue. In fact, she will -- and she should -- face questions from liberals about her views on abortion, the right to privacy and Roe v. Wade, about executive privilege and state secrets; about gay rights. But the race-based jihad against Sotomayor is silly and, frankly, racist.

Still, it's fun to watch the Republican Party self-destruct. Manuel Miranda, the former chief of staff to former Sen. Bill Frist forced to resign for hacking Democratic staffers' e-mail accounts, is leading a crusade to make Senate Republicans filibuster Sotomayor -- even though he led the charge to make it impossible for Democrats to filibuster Republican judicial nominees back when he worked for the GOP Senate majority. Got that? I guess the irrepressible Miranda just doesn't have time for consistency.

But Miranda is not merely insulting Sotomayor, insisting "she could Bork herself" because "she has a temper" and "an attitude." (Oh, and Jeffrey Rosen? Miranda says he's based his case against Sotomayor on your reporting. No more blogging for you!) In an interview with Politico, Miranda also slurred Senate GOP leader Mitch McConnell as "limp-wristed" for refusing to fight Sotomayor more viciously. Snap! McConnell actually voted against Sotomayor in 1998 when Bill Clinton promoted her, because he believed "she'd bring pre-existing personal and political beliefs into the courtroom," he told Politico, and he added, "many of the same concerns I had about Judge Sotomayor 11 years ago persist."

So how much more negative does Miranda need McConnell to get? Does the minority leader need to call her a racist and belittle her intelligence, as Rush Limbaugh and Pat Buchanan have, to be man enough for Miranda? This is going to be worse on Republicans than it will be on Sotomayor, trust me. They are in the process of Borking their whole party, for years to come.