Gingrich backs off on Sotomayor 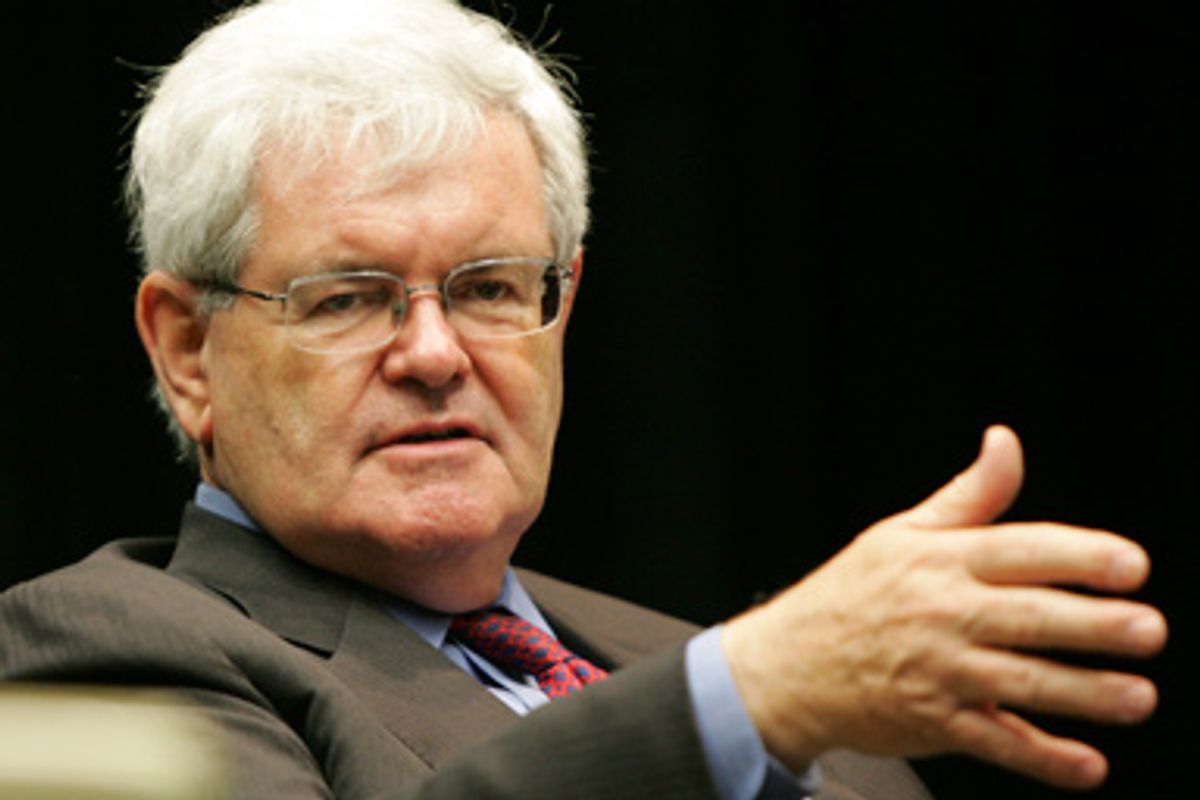 Newt Gingrich speaks during a conference on health care reform in Columbia, S.C., May 21, 2009
-- Newt Gingrich speaks during a conference on healthcare reform in Columbia, S.C., May 21, 2009.

The clearest sign that the right-wing assault on Sonia Sotomayor is backfiring on the GOP is the fact that today Newt Gingrich dialed it back a bit. He said calling her a "racist" might have been "too strong," though he said he's still concerned about her views on race.

Tuesday Pat Buchanan says "Stop the name-calling!" after a full week of name-calling, and Wednesday Gingrich follows suit. Thanks, guys! No, really, I should practice being gracious. I appreciate that Gingrich will stop calling Sotomayor a racist. I do.

Of course, Rush Limbaugh says he won't take back his "racism" slurs. "I'm not retracting it," Limbaugh said on his show today. "Nobody's refuted it. Now they may say 'Don't say it, Rush. Dial it back a little bit.' But nobody's saying I'm wrong. Nobody's saying I'm making it up. I mean, when she says that she'd do a better job than a white guy, what is it? It's racism. It's reverse racism, whatever, but it's still racism. She would bring a form of racism, bigotry to the court."

Note to my Republican friends: If you want any clearer picture of how Limbaugh's goal is ratings, money and power, and has nothing to do with helping his alleged party retake control of government, there you have it.

But just when it seems like some of the television blowhards -- and I count the unelected Gingrich in that group -- are softening their rhetoric, recognizing that it's not getting them anyplace, some GOP senators are stepping it up. Here comes Lindsey Graham, the wealthy senator who's calling himself "an average, everyday white guy," telling the media he's worried Sotomayor's views mean she would discriminate against him. That's utterly ridiculous -- both that Graham is somehow average, and that there's any reason at all, from her record, to fear Sotomayor will be unfair to white men. "There is a character problem. There is a temperament problem," added the BFF of  John McCain, he of the volcanic anger.

It is still a puzzle that so many of these white male conservatives can remain completely ignorant of Sotomayor's record on race, while focusing solely on her "wise Latina woman" remark. Greg Sargent today uncovered a speech Sotomayor made in 1994 that says almost exactly the same thing (almost exactly, and I'll get to the difference), and it didn't even come up in her 1998 confirmation hearings to the 2nd Circuit seat, although she sent it to Republican senators vetting her then. Here's what she said:

“Justice O’Connor has often been cited as saying that "a wise old man and a wise old woman reach the same conclusion in dueling cases. I am not so sure Justice O’Connor is the author of that line since Professor Resnik attributes the line to Supreme Court Justice Coyle. I am not so sure that I agree with the statement. First, if Prof. Martha Minnow is correct, there can never be a universal definition of 'wise.' Second, I would hope that a wise woman with the richness of her experience would, more often than not, reach a better conclusion."

Sargent calls Sotomayor's 1994 remarks "virtually identical" to what she said in 2001, but I'm going to go out on a limb and explain why they're different, and more controversial -- and why I'm glad she's walking them back in private meetings with senators.

In 2001 Sotomayor added two things to her remark -- her own race, and exactly whom she'd reach better conclusions than: white men. I know what she meant, in both speeches she used the term "I would hope," which implies both wistfulness and irony -- she knows being a woman or Latina doesn't guarantee wisdom. Her commitment to fairness shines through if you read her entire 2001 speech, especially the section that's almost never quoted, where she says: "I am reminded each day that I render decisions that affect people concretely and that I owe them constant and complete vigilance in checking my assumptions, presumptions and perspectives and ensuring that to the extent that my limited abilities and capabilities permit me, that I reevaluate them and change as circumstances and cases before me requires."

Still, even though I know what she meant, and even though I think her fairness shines through the speech, and even more clearly through the 96 race discrimination cases she's faced, in which she's found for the plaintiff only 10 times (and nine of those were unanimous decisions), I'm still glad she told Sen. Dianne Feinstein on Tuesday that she made "a poor choice of words" in the 2001 speech. I happen to agree with her on that. It should be self-evident she didn't make the best word choice; her words have been distorted and misinterpreted, sometimes willfully, sometimes not.

The bigger issue is: Those of us who want to focus on the real inequities of society -- the fact that women and non-whites still face discrimination, the fact that they're more likely than white men to be poor, the disproportionate share of corporate and political power the Lindsey Grahams of the world still hold -- well, like it or not, we have to learn to talk about it all differently, now that we have a black president and the most integrated Cabinet in American history. We have to remember that poverty and bad luck, just like talent, comes in all colors. We've never wanted the right to say we're better than white men, just that we're equal.

So Sotomayor walked her words back, and so did Gingrich. Let's call that a victory for the forces of enlightenment and fair debate. Let's hope it means less shouting and more examination of Sotomayor's rulings and judicial philosophy. A girl can dream, can't she?