The triumph of the uncelebrity

Jon and Kate! Octo-Mom! Speidi! Stars are out, ordinary people are in -- until we render them as soulless as celebs 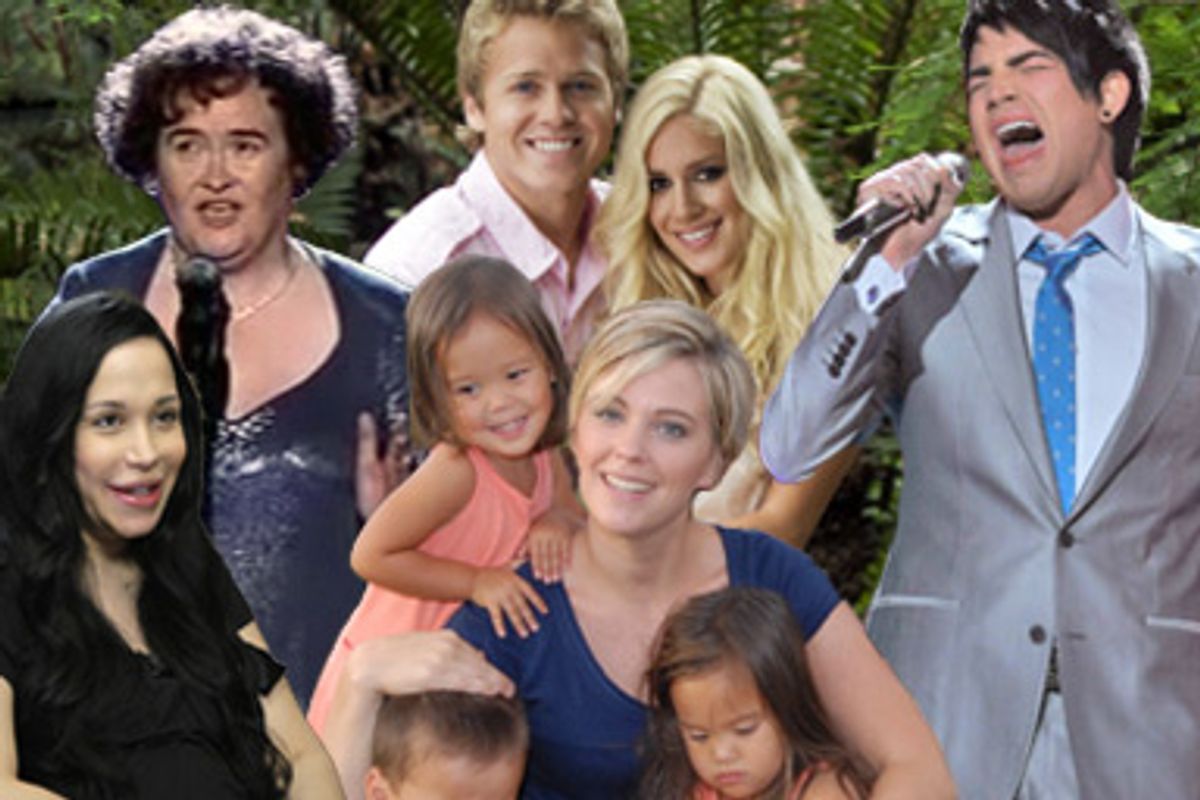 These last few weeks may go down in history as the tipping point when ordinary people replaced celebrities at the pop cultural whipping post. First sextuplet parents and reality stars Jon and Kate Gosselin fell to pieces before our eyes, then Kate's brother, Kevin Kreider, made a teary-eyed appearance on "The Early Show" to decry the fact that his nieces and nephews were being exploited and "viewed as a commodity." On Sunday night, awkward cat lady and overnight star Susan Boyle was taken to the hospital to be treated for "exhaustion" after her loss to dance group Diversity on "Britain's Got Talent." Then early this week, reality dilettantes Heidi and Spencer Pratt quit "I'm a Celebrity, Get Me Out of Here" (twice), but allegedly called the whole thing a "mental fake-out to mess with the competitors" -- see also, yet another publicity stunt the likes of which formed the two-headed monster Speidi from the molten ashes of two unexceptional humans in the first place.

But who are the victims: us or them? The digital age has allowed a ravenous worldwide mob to devour everyday folks -- stalking them with cameras, revealing their secrets -- and then spitting out their bones. Octo-Mom was a stripper! Kate Gosselin kept Jon on a $5 a day allowance! Each accidental uncelebrity wanders into our cross hairs and we treat them to the kind of scrutiny once reserved for Supreme Court justice nominees and the girlfriends of philandering politicians. While fame in the age of YouTube looks so easy and accessible that few lonely souls wish to remain anonymous, its spoils are often overlooked. "But the tigers come at night," Susan Boyle sang ominously in her memorable audition repeated 200 million times on YouTube. Little did she know that the very audience that wept openly before her were the tigers she sang about, anxious to tear her world apart and turn her dream to shame, just as her song predicted.

But while the world may be poised to pounce on Boyle and Octo-Mom and every other accidental uncelebrity that will come after them, it's unreasonable to blame the masses or the mass media for the fact that even the most ambivalent uncelebrity still seems unable to resist feeding themselves into the treacherous and soul-crushing gears of the new uncelebrity branding machine. Regular folks offer up their life stories -- throwing in their dignity and self-respect along with it -- and out comes a series of pointless interviews, a book deal, a speaking tour, a reality show, plus CDs, jewelry lines, skin product endorsements and everything else under the sun. Even as uncelebrities lament being harassed by the paparazzi at every turn, they can't seem to get off that crazy conveyor belt of commodification without transforming every last scrap of their souls into consumable goods.

And naturally the most "successful" uncelebrities, like Spencer Pratt or Anna Nicole Smith before him, recognize that their continued success depends on their willingness to serve up their own undiluted jackassery at every turn. And in a new media universe dominated by procrastination-fueled wandering and short attention spans, all it takes is a little intra-uncelebrity sniping to generate headlines far more popular than the now-archaic-seeming news of Mel Gibson's latest expletive-strewn meltdown. Recognizing this, gossip rags and celebrity shows point cameras in uncelebrity faces and ask them questions about other uncelebrities, creating such scintillating headlines as "Octo-Mom to Kate Gosselin: Stop Judging Me!" and "Spencer to Audrina: You're a Ho!"

Sadly, these insipid stories trickle up from the gutter to so-called legitimate news sources. Chasing diminished ad revenue, uncelebrity pap is born at Radar Online or TMZ.com, then gets picked up by the San Jose Mercury News, L.A. Times or CBS in the hopes of capturing enough page views to keep these relatively serious (and therefore doomed) news outlets afloat for another day.

Where are the real celebrities in all of this? While Spencer Pratt now has the ability to work the known universe into a lather over his unspeakable repugnance -- and let's face it, in the reactionary, three-seconds-of-fame age of Twitter, that is a marketable skill -- what once passed for big news in the celebrity world fades without much notice, let alone controversy and commotion. Celebrity magazines, which multiplied to keep up with consumer demand a few years ago, now struggle to compete for our attention in a cultural climate that views them with increasing skepticism or worse, apathy. Outside of Brangelina, few celebrities have the power to sell magazines (which might explain why Brangelina is on the cover week after week).

But then, celebrities got pretty boring, once we got to know them a little better. The running feature in Us magazine titled "Stars: Just Like Us!" with its shots of Jennifer Aniston sipping a latte or Lindsay Lohan shoe shopping, only proved that stars weren't like us at all. They seemed to spend all their time wandering around the same overpriced boutiques with an enormous support staff in tow, or taking their toddlers to the park for a photo op in full stage makeup. Fed a steady diet of innocuous but relatable tidbits -- Rachel McAdams just loves Ultimate Frisbee! Tori Spelling says being a mom, like, totally changed her life! -- we concluded that not only weren't stars the least bit like us, but they were way more boring than we are.

Stars were much more lifelike in the old days. Back in the '80s, "Worst Dressed" lists were populated by the hundreds of celebrities who left the house without the aid of a stylist. Remember the train wreck that was Cher? Those sorts of big, colorful explosions of bad taste were driven to extinction by a whole industry of image-molding professionals. But ironically, the stylists and personal trainers and magazine editors who've colluded to fine-tune and airbrush and sugarcoat the life out of the celebrity animal have only insured their own demise in so doing. Surrounded by Ayurvedic specialists and yoga instructors and personal chefs that live in the guest branch of their 15-bedroom mansions, interfacing only with personal assistants and personal concierges and personal managers who wait quietly, patiently, a few inches from their expertly loofahed elbows every minute of the day, the most successful celebrities have had their former personalities sloughed off like so much dead skin.

Thus, the paid professionals who polish celebrity images to a high gloss while spackling over every unusual or unrelatable quirk that might limit a star's ability to move the maximum volume of product off the shelves have effectively retouched themselves out of a job. Because, as it turns out, seconds after celebrities began inviting us into their recently redesigned kitchens, we no longer cared. We were warmly welcomed into Tom Cruise's Colorado ranch house and shown framed photos and leather couches and Suri's little playhouse under the stairs, and we understood it all to be exactly as interesting and authentic as a meticulously constructed movie set. As far as we could tell, celebrities spent all of their time doing the same thing: shopping at Barney's while talking to their managers on their cellphones, then dashing home to bleach their teeth. These days, the headlines may try to make stars look more ordinary, and therefore vaguely interesting ("Brad Pitt Keeps Fresh With Baby Wipes, Reveals Costar"), but we know better.

As unsavory and omnipresent as the uncelebrity circus might be, is it really any mystery why the incoherent, self-involved ramblings of a freak show like Octo-Mom would capture our interest far more than an up-close and personal interview with Mariska Hargitay in her four-bedroom Hollywood Hills bungalow? After a decade of dutifully lapping up the latest truly bland, unself-aware statements, Vegas-trashy "glamour," and uninspired home decorating styles of actors and actresses with all of the soul of a bag of frozen peas, we've replaced our diet of surgically enhanced automatons with real human beings -- albeit, those with a penchant for public humiliation.

Naturally, uncelebrities have only begun their unpredictable reign as the top dogs of this depraved media dog pile. Shortly after Spencer Pratt called the head of NBC threatening to quit "I'm a Celebrity, Get Me Out of Here," proclaiming himself "too famous" to deign to appear on the show while his brand-new wife Heidi wept piteously over the fact that fellow contestants had ripped the label off her shampoo, the pair were spotted, still in Costa Rica, allegedly chortling over their publicity stunt while bragging about how much money Heidi was going to make on a deal to peddle shampoo on QVC. Meanwhile, the rest of the show's competitors openly marveled over what kind of person would willfully assume the role of villain -- until someone pointed out that villainy had made Pratt more famous than the rest of them put together.

Likewise, Octo-Mom's eventual reality show is sure to be a huge hit largely because she shares Pratt's self-deluded swagger and tendency to confuse a rubbernecker's curiosity with genuine interest. All a reporter from Radar Online had to do was ask Nadya Suleman to look at some photos of Kate Gosselin in a bikini , and she dutifully rambled on for several minutes about how Gosselin "cheated" by having surgery and she still looked "boxy."

Of course, these ordinary people will only be "just like us" for about five more seconds, and then the book tours and the image consultants and the paparazzi attacks and the aggressive interviews with Matt Lauer will start to take their toll. Whether their rise to fame was accidental or entirely by design, every uncelebrity from Adam Lambert to Jon and Kate to Speidi to Octo-Mom to even Susan Boyle will look roughly the same after the international herd charges over them. Whether they're taken down by a crippling addiction or a phalanx of highly paid professional handlers, it hardly matters: Very little of their former selves will remain, rendering them just as bland and worthless as the real celebrities that came before them.

We can't help it. In our gluttonous desire to touch something fresh and unusual and odd and unspoiled by the homogenizing influence of this global digital culture, we trample each new, genuine, special flower until it's flattened to the ground. And when the dust settles, we're more alone and more bored than ever in our stifling, self-created hothouse.