A bachelor party gone haywire, an anxious bride and Zach Galifianakis add up to a wickedly funny buddy movie. 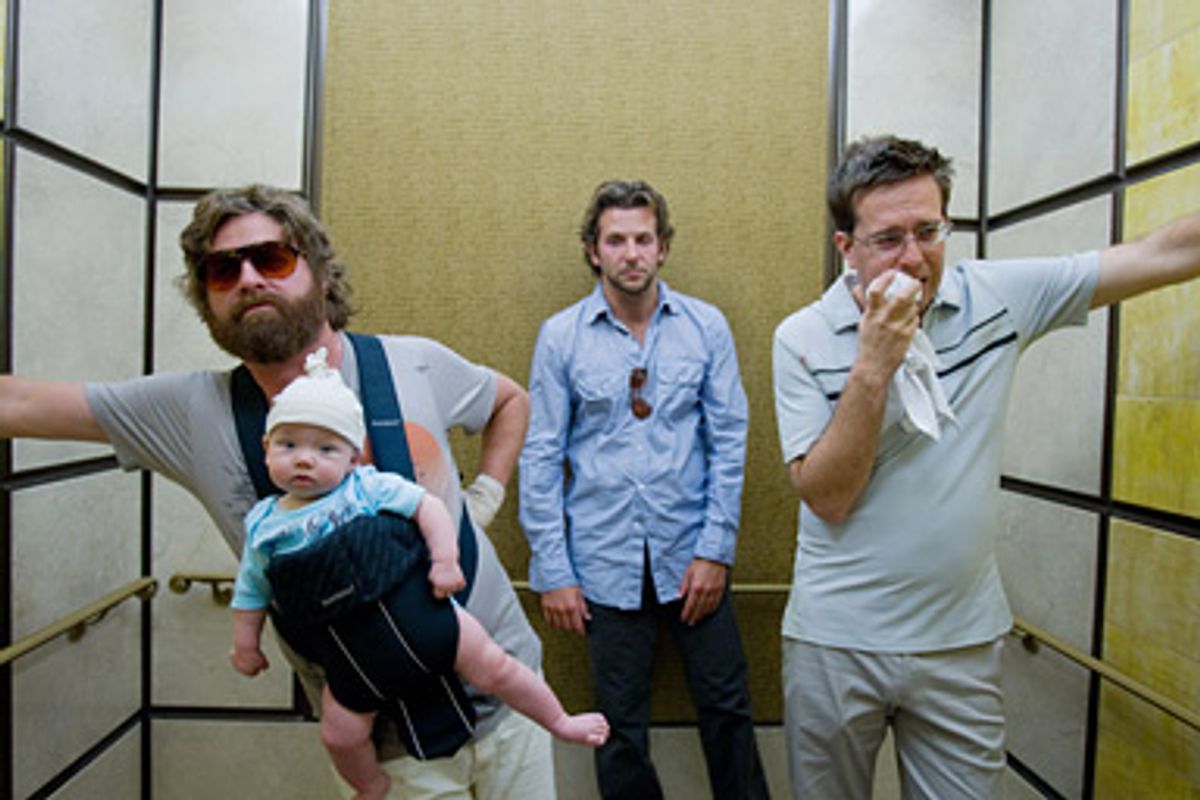 In Todd Phillips' "The Hangover," Zach Galifianakis pronounces the word "retard" with the accent on "tard," as if it were a French seafood dish. It's a simple, fine-grained joke that reminds us how the mechanism of comedy -- even of crude comedy -- is delicate, like a teacup; the division between what makes us laugh and what doesn't is often just a hairline crack.

"The Hangover" -- in which a group of guys try to piece together what actually happened at a Vegas bachelor blowout so wild they can't remember any of it -- is crude, audacious and anarchic. It also fits squarely into the category of guy-friendship comedies, which means it's about guys hanging out, drinking, swearing, messing around and sharing or not sharing their feelings.

And yet "The Hangover" is a cut above the typical contemporary guy-friendship comedy (even though some of these recent comedies, like John Hamburg's "I Love You, Man," are quite good). Early in "The Hangover," we see some shots of a chichi wedding preparation and a fluttery, anxious bride. Then we see a bunch of guys in the desert. One of them -- Bradley Cooper's Phil -- is making a phone call to said bride. He and his pals, one of whom is the bride's brother, have, um, lost the groom. The rest of the movie details, in ass-backwards fashion, the efforts of Phil, a self-centered, impatient schoolteacher; Stu (Ed Helms), a straight-arrow dentist and Alan (Galifianakis), the bride's pudgy, not-quite-right brother, to determine the exact coordinates of their friend Doug (Justin Bartha), the bridegroom. And to figure out how he got there.

"The Hangover" was directed by Todd Phillips ("Road Trip"), who seems to have found his footing again after missteps like the drearily retrograde 2004 "Starsky & Hutch." (The script is by Jon Lucas and Scott Moore.) And because it's always futile to dissect a comedy to determine what makes it work, I offer instead a few casual snapshots from "The Hangover" that represent the kind of careful -- or impetuous -- choices that keep a comedy clicking: one character's assertion that counting cards isn't illegal but merely frowned upon, "like masturbating on an airplane"; a Holocaust joke that only makes you fear it's going to be offensive; and a single, aimlessly wandering chicken.

Phillips has a gift for the absurd, all right, but he's also smart about pacing: "The Hangover" is a shaggy-dog tale that's actually, when you step back from it, perfectly shaped. I have a sister who has watched Preston Sturges' brilliant "Miracle at Morgan's Creek" exactly once, and although she likes it, she has vowed never to watch it again -- it makes her feel completely and utterly crazy. "The Hangover" doesn't have Sturges' genius, featherweight-knockout touch, but it does work on a principle that Sturges loved: It builds in us an increasingly squirrelly sense of anxiety, a mounting certainty that none of this is going to turn out OK. (The fact that there's an anxious, even if largely unseen, bride hovering in the background, wringing her hands over her missing bridegroom, doesn't help.)

"The Hangover" is a story told in multiple layers of details -- a hospital wristband, a "borrowed" police car, a missing tooth -- that trigger massive nonrecollections in the heads of the befuddled protagonists. Their ineptitude both endears them to us and makes us a little nuts, but I can't imagine anyone walking out of "The Hangover" before they find out exactly how that tiger got into the bathroom.

The performers navigate all this mishegas with surefooted grace: Cooper plays a character not much different from the smirky, self-satisfied dude he usually plays, except this time, his character's smart-aleckiness is the source of wicked laughs -- he's a guy who thinks he knows all the answers and yet has no clue what's going on. Helms brings some low-key sex appeal to a character that might normally be written off as just nebbishy. Watch for the appearance of Ken Jeong (aka Dr. Ken, who played the snippy gynecologist in "Knocked Up"), who makes a fashion statement out of black socks and a single black boot.

But Galifianakis -- whose mischievously oblique humor, including the strange online ads he's done for Absolut vodka, have made him a sort-of sensation -- is the trampoline against which nearly every joke bounces. His Alan is surly, temperamental, but also at times incredibly innocent, a wooly naif in a sloppy T-shirt. When he and the guys check in at Caesar's Palace, he eyes the gaudy gilt surroundings warily. Is this the real Caesar's Palace? he asks the desk clerk. She presses him, with visible impatience, to explain what he means. His eyes shift around nervously as he frames the question: "Did Caesar live here?" When he gets the answer, he responds with the appropriate huffiness. Why would Caesar, a man of taste and discernment, want to live in such a tacky, overpriced pile of crap? Alan knows a fake palace when he sees it; his ingenuousness, on the other hand, is the real thing.