"Land of the Lost"

Dinosaurs and Sleestaks -- oh yeah, and Will Ferrell -- roam the earth in this update of the trippy '70s TV show. 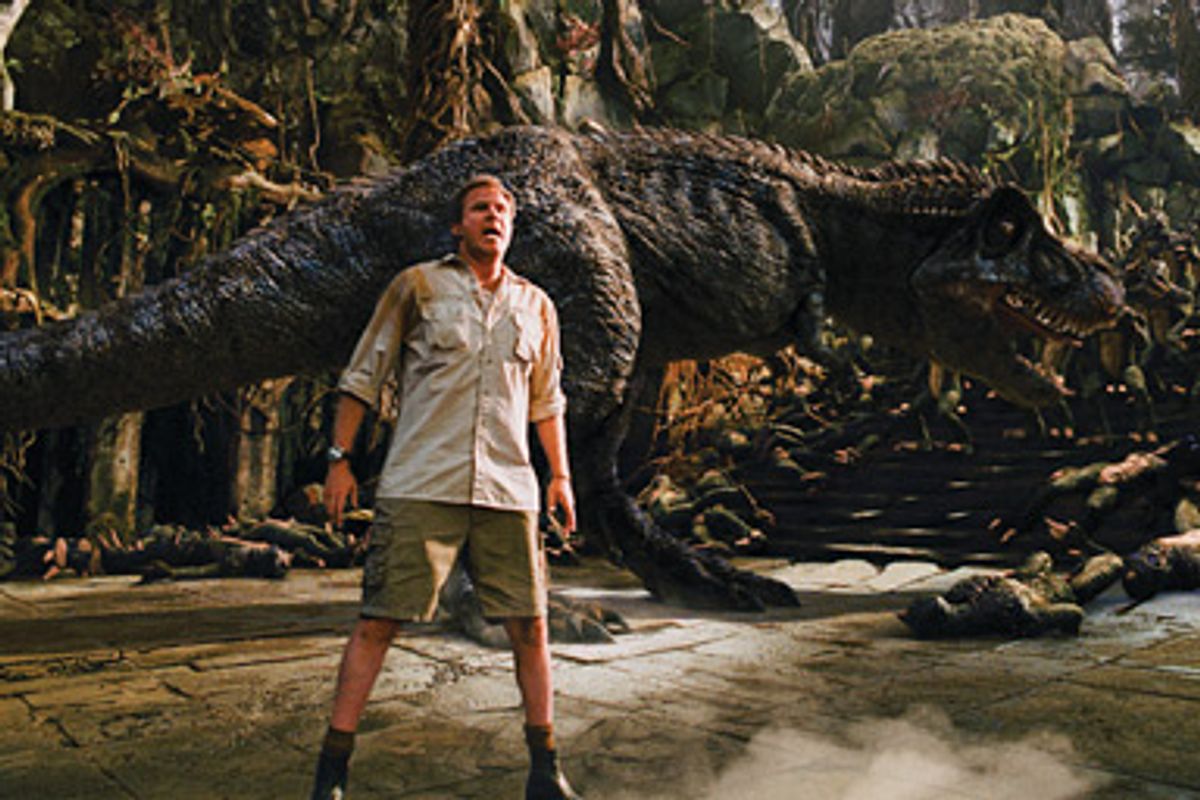 "Land of the Lost" isn't a terrible movie. It's merely a perplexing one: Who is this thing for? Why does it even exist? It features too many off-color jokes (albeit mild, silly ones) to be aimed at really little kids; its intentionally low-tech special effects -- which are actually pretty charming -- will just seem strange to younger viewers raised on ILM-enhanced everything. Maybe "Land of the Lost" is for slightly older folk who have fond memories of the '70s TV show, created by the trippy duo of Sid and Marty Krofft. But is it really the sort of thing worth hiring a babysitter for?

The appearance of "Land of the Lost" on the movie landscape is as puzzling as the sudden arrival of a Tyrannosaurus rex in Times Square would be, although far less momentous. Will Ferrell stars as Dr. Rick Marshall, an intrepid boob who believes he's close to making a seemingly important discovery about the space-time vortex, or something like that. In the course of doing some minor preliminary research, he and Cambridge-educated cutie Holly Cantrell (Anna Friel), along with redneck tour guide Will Stanton (Danny McBride), get sucked into a hole in time, landing in a world where dinosaurs and slow-moving, lizardy creatures known as the Sleestak reign supreme. Their guide in this strange new land is a shaggy, redheaded primate named Chaka (Jorma Taccone), whose chief preoccupation, at least at first, is trying to touch Holly's boobies.

"Land of the Lost" -- written by Chris Henchy and Dennis McNicholas and directed by Brad Silberling, whose most recent picture was the intimate, stripped-down "10 Items or Less" -- is harmless enough. It just isn't, with the exception of a few odd air pockets, particularly funny. Maybe in some alternate universe it's kind of funny when Dr. Rick, in an attempt to blend in with his surroundings, douses himself with dinosaur urine. Or when he, Will and Chaka imbibe the juices of a spiky plant with ecstasy-like properties and end up entwined in a group hug.

But in this universe, the gags just come off as aggressively silly. "Land of the Lost" certainly means no harm, but it takes no risks, either. The effects, including a Tyrannosaurus rex on a tirade (he's pissed off because Dr. Rick keeps repeating the fact that his brain is the size of a walnut), have a pleasing creakiness -- they make no effort to seem realistic, which is part of their appeal. But the movie around them has so little zing that they barely register. Ferrell is funny in a few offhand moments: At one point Holly asks Dr. Rick why he's wearing such inappropriate footwear for the terrain they're navigating, and he explains that he didn't know they were going on an expedition. "That's why I'm wearing my Florsheim zipper boots."

Ferrell is the kind of actor who can make a phrase like "Florsheim zipper boots" seem funnier than it is. And the fact that he's been overexposed in recent years doesn't negate the fact that he has certain traits that are rare among comic actors: For one thing, he isn't a spotlight hogger. In every movie, including this one, he's happy to stand by and let his co-stars do their stuff, without feeling the need to step in and grab our attention with clownish facial expressions or torrents of jibber-jabber à la Jim Carrey or Robin Williams. Ferrell is content to be low-key and goofy, and often enough -- as in "Anchorman: The Legend of Ron Burgundy" or last year's underappreciated "Step Brothers" (co-starring the wonderful John C. Reilly) -- the approach works. But none of the actors in "Land of the Lost," and probably not even its director or writers, seem to know what the point is. If the movie had appeared five years ago, in the midst of Hollywood's obsession with remaking '60s and '70s TV shows ("Starsky & Hutch," "Bewitched," "S.W.A.T."), we'd at least be able to explain it as part of a larger trend. But "Land of the Lost" is simply inexplicable. It is itself a lost movie, a weirder slip in the space-time continuum than any black hole Dr. Rick Marshall might have stumbled upon. It defies comprehension, as well as the laws of physics.