Race-baiting lowlights from Rush Limbaugh and Pat Buchanan, two of the pundits who say Sonia Sotomayor is racist. 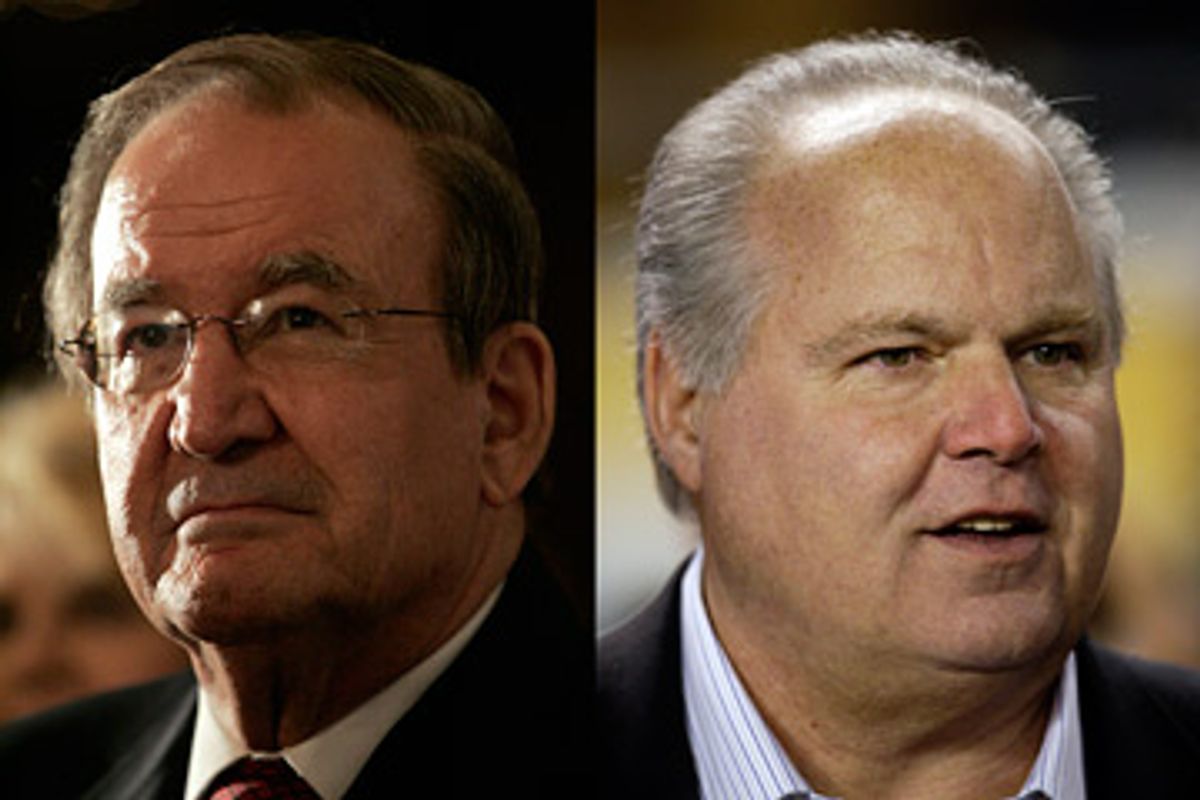 Whores and politicians become respectable if they stick around long enough, as someone once observed, and the same is plainly true of media personalities – especially in a culture that never pauses long enough to remember anything. Where amnesia is the rule, there can be no accountability for the likes of Rush Limbaugh, Glenn Beck, Patrick Buchanan and the rest of the broadcast mob denouncing the "racism" of Sonia Sotomayor. If anyone remembers who they are and what they have said over the years, their complaints about the Latina Supreme Court nominee will only elicit raucous laughter.

Who are these guys – with their long and sordid histories of encouraging white paranoia and ethnic division – to call her a racist?

In Washington media circles, Pat Buchanan is a well-liked and avuncular figure, presumably owing to his personal qualities rather than his crank politics, but for him to be encouraged to pontificate endlessly on the subject of race on television is worse than ludicrous. The late William F. Buckley Jr. expelled Buchanan from the pages of the National Review many years ago for his crudely anti-Semitic rants, which included a very unattractive tinge of admiration for Hitler. (Prejudice against Jews, unlike some other forms of bigotry, is anathema to most conservatives.) So obnoxious was Pat's blustering bully-boy attitude that he became intolerable even to the intolerant.

As for racism, where to begin with him? Discussing Sotomayor on MSNBC, Buchanan accused her of adopting the same attitudes that had kept blacks down in old Dixie. "Her entire career is based on advancing people of color, which is done at the expense of white people," he cried in that familiar high-pitched whine. "That was what was done in the South. They're doing it now to white males now…"

Except that Pat didn't mind so much when "they" were doing it to black folks in the South. He explicitly supported the race-based "Southern strategy" of his old boss Richard Nixon, whom he advised to avoid meeting with Coretta King one year after the murder of her husband, Martin Luther King Jr. In April 1969, he warned Nixon in a White House memo that visiting Mrs. King would "outrage many, many people who believe Dr. King was a fraud and a demagogue and perhaps worse ... Others consider him the Devil incarnate. Dr. King is one of the most divisive men in contemporary history."

Did Pat's views toward blacks and other minorities mellow over the decades? More than 20 years later, he was still supporting the apartheid regime in South Africa, noting that there was nothing in our own Constitution that would preclude a white minority ruling a black majority. (Such is the color-blind jurisprudence that he would no doubt like to see on the high court. Of course, he also told Nixon to burn the Watergate tapes, a key indication of his deep respect for law and justice.)

In his memoir, "Right From the Start," he suggested that the segregated District of Columbia of his boyhood had worked just fine:

There were no politics to polarize us then, to magnify every slight. The "negroes" of Washington had their public schools, restaurants, bars, movie houses, playgrounds and churches; and we had ours.

The story is much the same with Limbaugh and Beck, although neither of them is old enough to have developed Pat's warm youthful memories of Joe McCarthy, Francisco Franco and Jim Crow. As Limbaugh lambastes Sotomayor for her supposed racism, Republican senators cower, believing that he is a credible critic whose opinion must be considered. His views must therefore be granted credence in the mainstream media.

But doesn't anybody remember that Limbaugh's overt hostility to black athletes got him kicked off the ESPN airwaves as a sports commentator? He exists to stir racial division and fury among whites, even as he complains bitterly about the "anger" he claims to perceive among those scary people of color. He built his audience with racial coding and commentary, as when he suggested that the NAACP, which has consistently advocated nonviolence for nearly 100 years, promoted rioting. "The NAACP should have riot rehearsal. They should get a liquor store and practice robberies." He used to play the "Movin' On Up" theme from the old "Jeffersons" TV show whenever he mentioned Carol Moseley Braun, the Illinois Democrat who was the first black woman to sit in the U.S. Senate. He used to do bits in black dialect (and maybe he still does).

But to Rush, the threat of the Sotomayor nomination is clear. Not only is she a racist, but as he said on June 4, her ascent means that all minorities will be on the warpath against white men. No longer should it be argued that minorities cannot be racist because they have no power, because America has a black president and "we're talking now about a Supreme Court justice. The days of them not having any power are over, and they are angry, And they want to use their power as a means of retribution. That's what Obama is all about."

"Them"? "They"? Such generalizations and ominous warnings about an ethnic group – or "minorities," in the knuckleheaded locution – are the essence of racist discourse. Obviously Limbaugh is blind to his own abiding prejudice and fear, but why should the rest of us have to pretend that he is anything but a bigot?

There are other minor actors on the same stage, including Glenn Beck and Tucker Carlson, whose antics over the Sotomayor nomination have exposed their prejudice or hypocrisy. Beck, whose penchant for racial "humor" concerning Hispanics is notorious, is among those whining constantly about the "racist" nominee. Carlson, who used to despise anyone who used that term in debate, now uses it to describe her. Then again, he once said critics of Limbaugh should "lighten up." So what if Rush once told an African-American listener to "take that bone out of your nose"? After all, Rush was only "telling jokes" that were "pretty amusing."

The campaign against Sotomayor will not relent nor will the distortions of her words and views cease. But the sources of malicious nonsense ought to be assessed for who and what they are, in historical context – and dismissed as relics of a past that America at long last left behind on Election Day 2008.