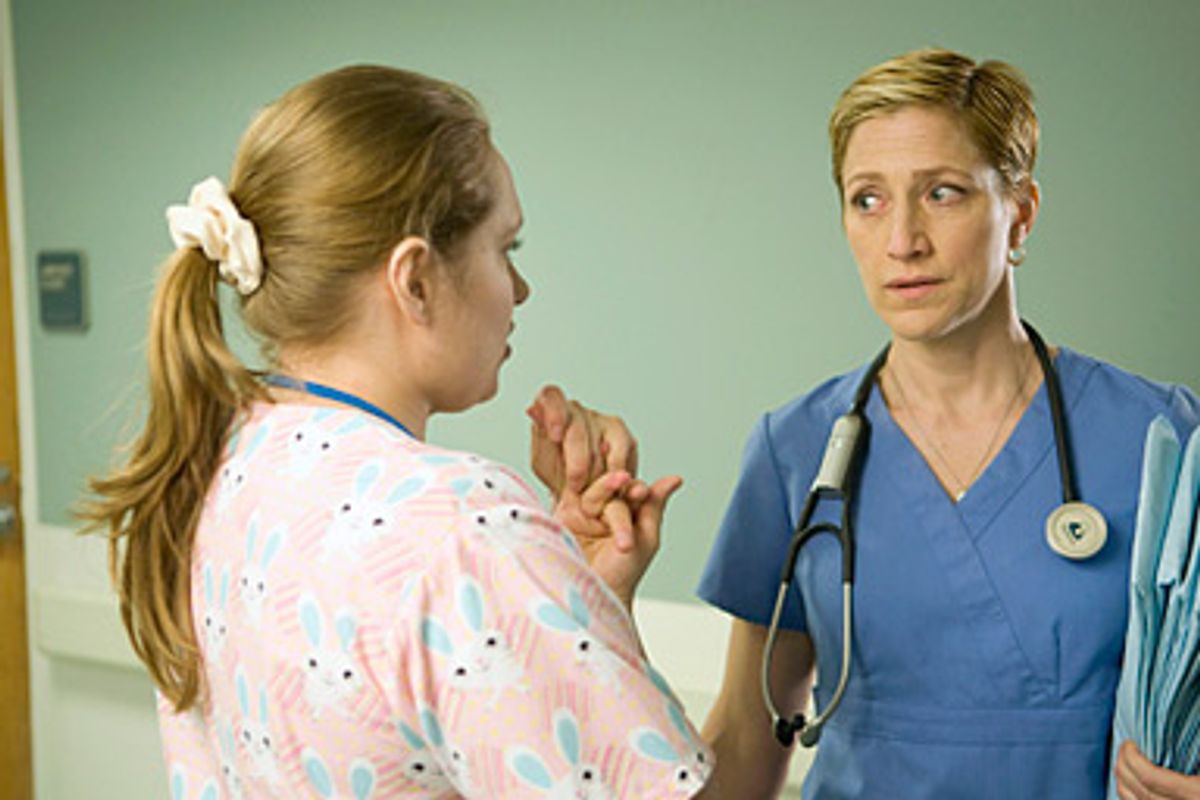 TV today is very dark. We long ago replaced lovable stepmoms like Abby from "Eight Is Enough" with self-involved, irresponsible, adulterous moms and swapped out tirelessly righteous crime-fighters like Kojak with corrupt cops struggling to keep their atrocities hidden. Almost 40 years after Mary Tyler Moore brought her lovably haphazard but principled schtick to the workplace, our TV offices are populated by elitist corporate bosses, lazy, self-serving underlings, vaguely pathetic managerial chumps and endless variations on the vainglorious jackass.

While our TV shows paint us all as easily distracted, neurotic, spoiled, grumpy human beings, we chuckle along as if we're above it. "Ah yes, a dark comedy -- a warped, overly cynical take on life!" we say, then blow off even more work to troll the Internet for something shallow or despicable or depraved to distract us from our lazy, irritable, vainglorious selves.

"Quiet and mean, those are my people. I don't do chatty." -- Nurse Jackie

Imagine if Carmela Soprano woke up this morning, got herself a gun, and blew Tony Soprano's head off. Then, picture Carmela selling her McMansion, cutting up her credit cards, cutting her hair short, throwing out her make-up, and moving to Manhattan to take a job as a kick-ass vigilante nurse, happy to break the rules whenever it means helping ordinary, everyday people to make it through a hard time.

But in this age of darkness, we can't very well stop there, now, can we? Next, we give Carmela a nasty addiction to pain pills, a self-involved doctor friend who takes her out to expensive sushi lunches, a pharmacist lover who slips her free Vicodin, and a sweet husband and two little daughters waiting at home, unaware of Mommy's secret life.

"That doesn't sound like Carmela at all!" you say? Exactly. Welcome to Showtime's "Nurse Jackie" (premieres 10:30 p.m. Monday, June 8) a new half-hour dramedy that's more drama than comedy, showcasing Edie Falco's numerous charms outside of the realm of suburban Mafia angst. Jackie Peyton is a (mostly) good egg with a sharp tongue who doesn't do chatty but who's willing to go to any length to alleviate her patients' suffering.

"Doctors don't heal, they diagnose. We heal," Jackie tells newbie nurse Zoey (Merritt Wever), but doesn't fully explain her policy of healing her patients by any means necessary, whether it translates to protecting them from uncaring hospital administrators, stealing drugs for them, allowing their children into the E.R., respecting their requests to decline treatment or putting a cocky but negligent doctor in his place.

When she's not preventing the system from crushing the sick and uninsured, Jackie is crushing Percocet into her morning coffee. She may have started taking the pills to treat chronic back pain she developed from being on her feet all day, but now it's clear that Jackie is hooked. Against the backdrop of an incredibly difficult, hectic, largely thankless job, it's obvious what the pills give her: an ability to beat back the darkness and cope with whatever unpredictable, messy challenges get wheeled into her E.R. next.

Jackie navigates her world with a dissatisfied smirk plastered on her face, like she's steeling herself in anticipation of the next blow. Every now and then, though, her eyes grow wide with empathy, and we see how much she cares. Once the moment passes, Jackie returns quickly to the picture of no-nonsense efficiency, instructing rookie nurse Zoey not to be so cheery and not to say hi so many times a day, or informing her that only idiots and magicians say "Ta da!" In another actress's hands, this would constitute an implausible tightrope walk, but Falco lends Jackie grit, compassion and an unapologetic, frank flavor of selfishness. This is the toughest sort of character to play, an impossible knot of contradictions, at once funny, kind-hearted, dismissive and slightly nihilistic. It's easy to see why Falco chose this role.

The colorful range of characters around Jackie are equally entertaining, from her close doctor friend Eleanor O'Hara (Eve Best), who's more concerned with pricey lunches and expensive clothes than her patients (albeit in an likeably edgy, British Catherine Keener sort of way) to Mohammed De La Cruz (Haaz Sleiman), a fellow nurse who alternates between supporting Jackie and giving her a hard time. Their cynicism is counterbalanced by the dorky, tiptoeing cheer of Zoey, whose irritating interruptions often serve as a somewhat naive but necessary voice of reason among the world-weary longtime denizens of the E.R.

But even with such a jaded and narcissistic circle of friends, Jackie's affair with Eddie the pharmacist (Paul Schulze, who also played Edie Falco's priest love-interest on "The Sopranos") is tough to parse. Maybe Jackie started sleeping with Eddie to get more pain pills once her legitimate prescription wore out, but now she genuinely loves him -- or at least she seems to in the first episode. Obviously an affair is within the realm of possibility, even for a morally upright person like Jackie. But once you meet her handsome, adoring husband Kevin (Dominic Fumusa) and her two young daughters, the whole picture gets a little confusing. Yes, it would've been a cop-out to make either her husband or Eddie unlikeable. But to present a stridently self-righteous, smart, reasonable woman who's sleeping with two really great guys? That not feasible to me, even with loads of pain pills and an unbelievably stressful job in the mix. Jackie is shocked when Dr. Cooper, a young physician new to the job, grabs her breast and tells her it's a "Tourette's response to stress," but her own response to stress is even more fantastical than his.

Unfortunately, the affair doesn't make any more sense by the show's sixth episode than it did by the end of the first. How does someone like Jackie end up constructing a double life for herself? Yes, it's easy enough to say that this is a side effect of addiction, that it comes with the territory. But after watching half a season of this show, there should be more hints to Jackie's problems in the mix, beyond the pills. We can see that Eddie may have a more refined, intellectual side than Kevin (who's a bartender) does. But as long as you're working with a dark comedy, why not give one or both of the men some obvious flaws, instead of presenting them both as lovable, great guys? There's something slightly disingenuous about this picture.

TV darkness can take many forms, and after years of watching unnervingly optimistic tripe, it's more than welcome. But sometimes darkness is used to hide the flaws in a concept that doesn't completely hold together. Under the cover of darkness, "Nurse Jackie" veers into wild and woolly territory without clarifying its characters' motivations or its central premise.

Naturally we're willing to forgive these flaws at first; there are more than enough snappy insults and bad attitudes around to keep us happy for a while. But several threads of the story are picked up and dropped again without warning. Jackie is annoyed when Dr. Cooper (Peter Facinelli) strikes up a friendship with Eddie, but it's not quite clear why. Jackie looks likely to get into trouble with her boss, Gloria Akalitus (Anna Deavere Smith), but any real consequences are obviously being saved for the last few episodes of the season.

We do get a glimpse of Jackie's concern for her family when her older daughter, Grace, starts staying up late obsessing about the bubonic plague. Her teacher calls Jackie and Kevin into a conference to tell them Grace has been drawing drab pictures with no sun in them. Jackie is defensive at first, but later asks, "Who draws Florida with no sun? It's the goddamn sunshine state!" Instead of agreeing to treat Grace, Jackie draws a bright yellow sun on her picture, demonstrating her attempts to will her problems out of existence. Unfortunately, though, that subplot disappears almost entirely for two episodes, so that we pretty much forget about it.

Obviously if "Nurse Jackie" were more of a comedy and less of a drama, it might not feel like a problem. It's not as if we demand to understand the motivations and inner workings of Jack Donaghy of "30 Rock" or Michael Scott of "The Office." But a dramedy faces the unfortunate challenge of having to walk a line between believability and farce. If you really want your show to be character-driven -- and there's no doubt that's the aim here -- you have to make sure the characters make some logical sense. Even if they behave illogically, it should all fit together, however sloppily, into some form the audience can connect with.

Showtime is a sucker for half-hour dramedies with an appealingly modern, smart tone: "United States of Tara," "Weeds," even the relatively disappointing "Californication" appeared stylish and fun at first. But clever quips and absurd, edgy plots that lead nowhere are getting harder and harder to rally around. As the first season of "Tara" drew to a close, something about Tara's (Toni Collette) self-consciously casual-cool demeanor started to make her feel far less authentic than her relatively whimsical, absurd alternate personalities. Similarly, "Weeds," which begins its fifth season the same night "Nurse Jackie" premieres, constantly threatens to spiral into such darkness that it'll never find its way out again. While Doug and Andy and the boys always have their high times to cut the tension, this season a pregnant Nancy (Mary-Louise Parker) finds herself trapped in a severely twisted relationship with a menacing Mexican drug lord who, through gritted teeth, threatens her into seeing a Spanish-speaking gynecologist of his choosing. Ha. ha. Hysterical.

The point is, unlike the family sitcom or the procedural drama, the half-hour dramedy genre is relatively young, and that shows in its wobbly plot lines, unsteady character development and unfocused premises. For all of its charms, "Nurse Jackie" needs to offer a little more than an enigmatic nurse and a parade of clever grouches. Sometimes rather than seeking out thoughtful ways to address and resolve the questions and problems they presented at the start of the season, TV writers today hide behind witty quips, lovably flawed characters and the chaos of a morally unsteady universe. In other words, they do what we do: When confronted by complexity, they hide behind insults. It works for a while, but then some larger guiding principle has to come into play. Even to the most pessimistic among us, the darkness gets a little old if there's no sense of order or redemption to balance it out. When will TV pull out of its current nose dive into the inky abyss and find some new flavor of sweetness and light to believe in? Would it kill them to draw a shiny, yellow sun into the picture for a change?

Californication I Like To Watch Nurse Jackie Television Weeds