The shooter has been identified as an 88-year-old man with a long history of racist and anti-Semitic writings. 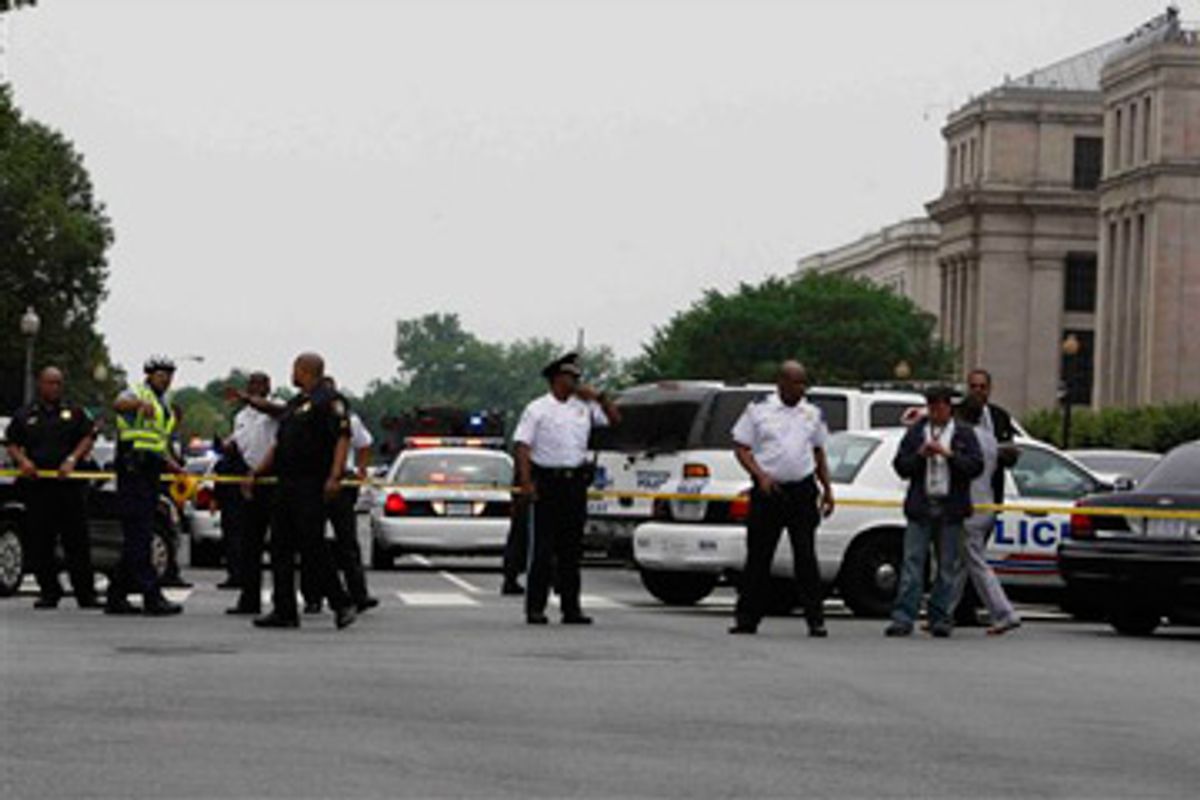 At just before 1 p.m. ET on Wednesday, a man walked into the U.S. Holocaust Museum, pulled out a shotgun and fired at a private security guard, who returned fire. By the time it was over, five shots had been fired and two men -- the guard and the shooter -- had been wounded and were taken to the hospital.

The suspect has been identified as James W. von Brunn, an 88-year-old man with a lengthy record of anti-Semitic and conspiracist writings on the Internet, as well as a history of taking armed action against those he saw as enemies.

On his Web site, Holy Western Empire, von Brunn writes of himself:

James W. von Brunn holds a BachSci Journalism degree from a mid-Western university where he was president of SAE and played varsity football.

During WWII he served as PT-Boat captain, Lt. USNR, receiving a Commendation and four battle stars. For twenty years he was an advertising executive and film-producer in New York City. He is a member of Mensa, the high-IQ society.

In 1981 Von Brunn attempted to place the treasonous Federal Reserve Board of Governors under legal, non-violent, citizens arrest. He was tried in a Washington, D.C. Superior Court; convicted by a Negro jury, Jew/Negro attorneys, and sentenced to prison for eleven years by a Jew judge. A Jew/Negro/White Court of Appeals denied his appeal. He served 6.5 years in federal prison. He is now an artist and author and lives on Maryland's Eastern Shore.

Von Brunn is also a Holocaust denier. He penned an essay titled "Hitler's worst mistake: He didn't gas the Jews," and wrote a book, "Kill the Best Gentiles! The racialist guide for the preservation and nurture of the white gene pool" in which he says, "There is NO evidence supporting the 'HOLOCAUST' as defined: THERE WAS NO POLICY TO MASS MURDER JEWS. NO ORDER WAS GIVEN TO MASS MURDER JEWS. THERE WAS NO BUDGET TO CARRY OUT SUCH A POLICY. THERE WERE NO MEANS (GAS CHAMBERS, etc.) TO CARRY OUT MASS MURDERS."

Another piece of writing from von Brunn's Web site seems to hint at the beginning of his anti-Semitic obsession, after he returned to New York City after having fought in Europe during World War II. He writes:

When I returned after the war, New York had become the largest Jew city in the World. EVERYTHING had changed. The streets were unclean. Taxi drivers were officious. Cigar smoke dominated the fine restaurants, vulgar talk. Ugliness. Rudeness, push and shove, Prestigious chairmanships of the Metropolitan Opera, Metropolitan Museum of Art, Carnegie Hall, for example, were held by Jews. Almost all art galleries were Jew-owned. Newspapers, publishing, tin-pan alley . . . you know the story.

The Herald Tribune, an Aryan newspaper, was put out of business because JEWS wouldn't advertise in it. The city was bursting with "gassed" JEWS. It took 3 weeks to find an apartment. One day I was walking across 57th ST. at Madison Avenue and the light changed to yellow as I was midway. A car jumped the light, shot up to me, slamming on his brakes. He yelled, Get the fuuuck outta my way, asshole. I dented his car hood with my fist. Motherfucker, he screamed, pointing to the far corner of the street -- I'll see you over there, there, there -- he pointed to the far corner. He was a young JEW. He found a parking spot and I went over to him. OK, foul mouth said I -- get out. He said fuck you, rolled up his window and took off.

Update: And, of course, it turns out Von Brunn was a "Birther" -- one of those who believe President Obama wasn't born in the U.S. or is for some other reason not eligible for the presidency. His post on an Internet forum about that can be seen here. (Hat-tip to Matt Corley.)