Obama wins an election in the Middle East

Lebanon's voters gave the White House the victory it wanted -- with a lot of help from Hezbollah. 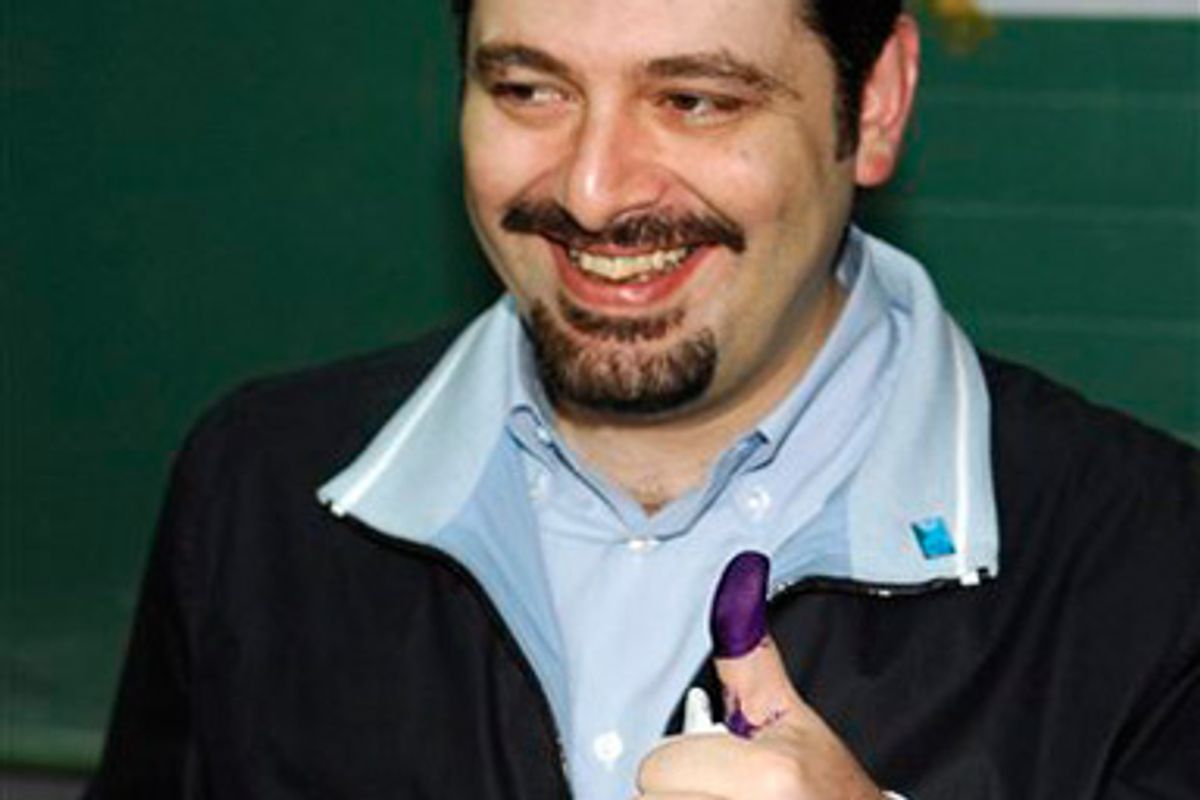 Saad Hariri, one of the top leaders of the pro-Western coalition, shows his ink-stained finger before casting his vote at a polling station in Beirut, Lebanon, Sunday, June 7, 2009. Lebanese streamed to their hometowns on the Mediterranean coast and high up in the mountains Sunday to vote in crucial elections that could unseat a pro-Western government and install one dominated by the Iranian-backed militant group Hezbollah.
--

President Barack Obama's speech in Cairo last Thursday may already have borne fruit. His call for political moderates in the Muslim world to fight extremism may have helped tip the weekend's parliamentary elections in Lebanon to the anti-Syrian March 14 Alliance. Obama did not explicitly call for the defeat of Hezbollah in the elections, but the Lebanese already knew where the administration's sympathies lay. His speech came three weeks after a Beirut visit by Vice President Joe Biden in which Biden warned at a news conference, "We will evaluate the shape of our assistance programs based on the composition of the new government and the policies it advocates."

Whatever the size of Obama's influence, the election has already had a direct impact of the future of Arab-Israeli negotiations and on the realization of U.S. aims in the region. A Hezbollah win would have strengthened the case made by the right-wing Israeli Likud Party that Iran and its proxies are a higher priority for Israel's foreign policy than trying to restart the peace process with the Palestinians. For Americans and the rest of the world, the Lebanese elections were about whether Iran would be strengthened or weakened in the Levant, and whether Israeli Prime Minister Benjamin Netanyahu would have a new pretext for intransigence. The answer to both questions was a resounding no.

But while the consequences may have been global, the politics, as always, were local. Even before Biden's visit and Obama's speech, most of the Lebanese public had probably already made up its mind about the arrogant and presumptuous Hezbollah-dominated opposition. The March 14 Alliance won because of the strength of the local economy, the desire for tourism, and anger at Hezbollah for streetfighting in 2008 that left 11 dead, more than a year of protests and sit-ins, and the Hezbollah bloc's ultimately successful attempt to strong-arm its way to effective veto power in the government.

Lebanon, where no one religious sect can claim a majority, is a small pond with a handful of big frogs in it. The chief power broker since 2005 has been the dapper, goateed Saad Hariri, son of slain multibillionaire and former Prime Minister Rafiq Hariri, who was assassinated in February 2005. Saad Hariri will now become prime minister. The Hariris, Sunni Muslims, made their pile in Saudi Arabia and are close to the royal family there. This political dynasty stands for Arab cosmopolitanism and represents the urban, upwardly mobile Sunni middle classes (Sunnis are just over a quarter of the Lebanese population, Shiites at least a third).

Hariri believes that his father was assassinated at Syrian behest, and he led the successful movement to expel Syrian troops from Lebanon in 2005 (his alliance is named for the date of the massive anti-Syrian demonstrations called the Cedar Revolution). He therefore takes a dim view of the Shiite Hezbollah Party, which continues to be allied with Syria and with Shiite Iran. Although Hariri is often called "pro-Western," his closest ties are with Riyadh, and some of his supporters are Sunni fundamentalists who, while anti-Iran, are not exactly fans of Washington either. Critics charge that Saudi Arabia poured money into Lebanon to ensure the victory of Hariri and his partners, and that thousands of Sunni Lebanese expatriates were flown back to vote in key districts.

Hariri is allied with Samir Geagea, an old-time Christian guerrilla warrior, whose Lebanese Forces Party did better than expected, though among its Maronite Christian base it remains a minority taste. Hariri is also allied with Walid Jumblatt, head of the Progressive Socialist Party and warlord of the Druze, an offshoot of Islam that accounts for under 10 percent of Lebanon's population. The new government thus represents key Lebanese constituents, and especially the urban middle classes and entrepreneurs that are suspicious of neighboring Syria's ponderous one-party state and of its fundamentalist Shiite Iranian backer. Because of his coalition, Hariri manages to receive support simultaneously from Saudi Arabia and the Gulf, from Lebanon's old colonial patron France, and from the United States.

Hariri and his coalition squared off against Hasan Nasrallah, the shrewd leader of Hezbollah, and his ally Gen. Michel Aoun. Nasrallah had garnered substantial popularity in Lebanon, having spearheaded the effort to end Israel's occupation of the south of the country, and then having successfully withstood an Israeli invasion in 2006. But by then he had already split with the March 14 Alliance, with whom he had cooperated in 2005, and forged a tie with Aoun. He then overreached in May of 2008, when he came into conflict with the government over his ability to monitor comings and goings at Beirut's airport, which Hariri wanted to cut off. Nasrallah sent his Hezbollah fighters into the streets of the capital and thus forced the government to back down on the airport surveillance issue.

This move was a temporary success, but it may have been a strategic failure. For the first time, Hezbollah had turned its arms on other Lebanese, something Nasrallah had earlier pledged never to do, and he deeply harmed the popularity of his movement among Christians and Sunnis. Blind to this change in how he is perceived, he even went so far as to boast in May of this year that the Beirut takeover had been a "glorious moment."

At the same time, Aoun undermined himself with his own Christian constituency by picking fights with the Maronite Catholic patriarch, Nasrallah Sfeir, as well as with Gen. Michel Suleiman, the Christian president who had headed the armed forces. He was also seen as far too close to Damascus. Lebanese Christians still cling to the church, the army and the presidency as key elements in their political identity and solidarity, and Aoun had attempted to undermine all three. In the weekend's elections, his Free Patriotic Movement upped its representation in Parliament from 21 to 27 seats, but its support among Lebanon's Christian electorate slipped from its 2005 figure of 70 percent.

In some ways, the victory of the ruling March 14 Alliance is a public vote of confidence in the Lebanese economy, which has largely avoided the fallout of the global downturn and is on track to grow 6 percent this year. Lebanese banks adopted conservative lending and investment policies as a result of the economic meltdown during the 1975-1989 civil war, and legions of Lebanese expatriates and Gulf investors assure bank liquidity and a hot real estate market. The Lebanese tourist market is potentially huge, but it has been devastated in recent years by Israel's attack and then by faction fighting between Hariri's supporters and Hezbollah militiamen.

With the victory of March 14 Alliance, many Lebanese are hoping for a bumper crop of tourists and music festivals. Despite Europe's economic doldrums, nearly half a million tourists went to Lebanon in the first quarter of 2009, up over 50 percent from the previous year, and tourism revenues this year could come to $2.5 billion, some 10 percent of the gross national product.

Hezbollah prospered for years by offering the Lebanese an effective means of resistance to Israeli encroachments and by allowing them to hold their heads up high. Even Christians and Sunnis supported Nasrallah during the Israeli attack in 2006. But once he turned his guns on his own countrymen, he transformed himself from a symbol of Lebanese pride into a source of oppression and humiliation. Above all, this election was a referendum on which policies would lead to peace and prosperity. Whether they had their eye on Biden's stick or on Obama's carrot, the Lebanese voters made it clear that they did not believe Nasrallah could deliver. It's Obama's time in Beirut, not Khamenei's, and the president now has one less obstacle to face in his pursuit of peace in the region.