Listen instead to the people giving testimonials to the doctor: His family, his patients, his colleagues. 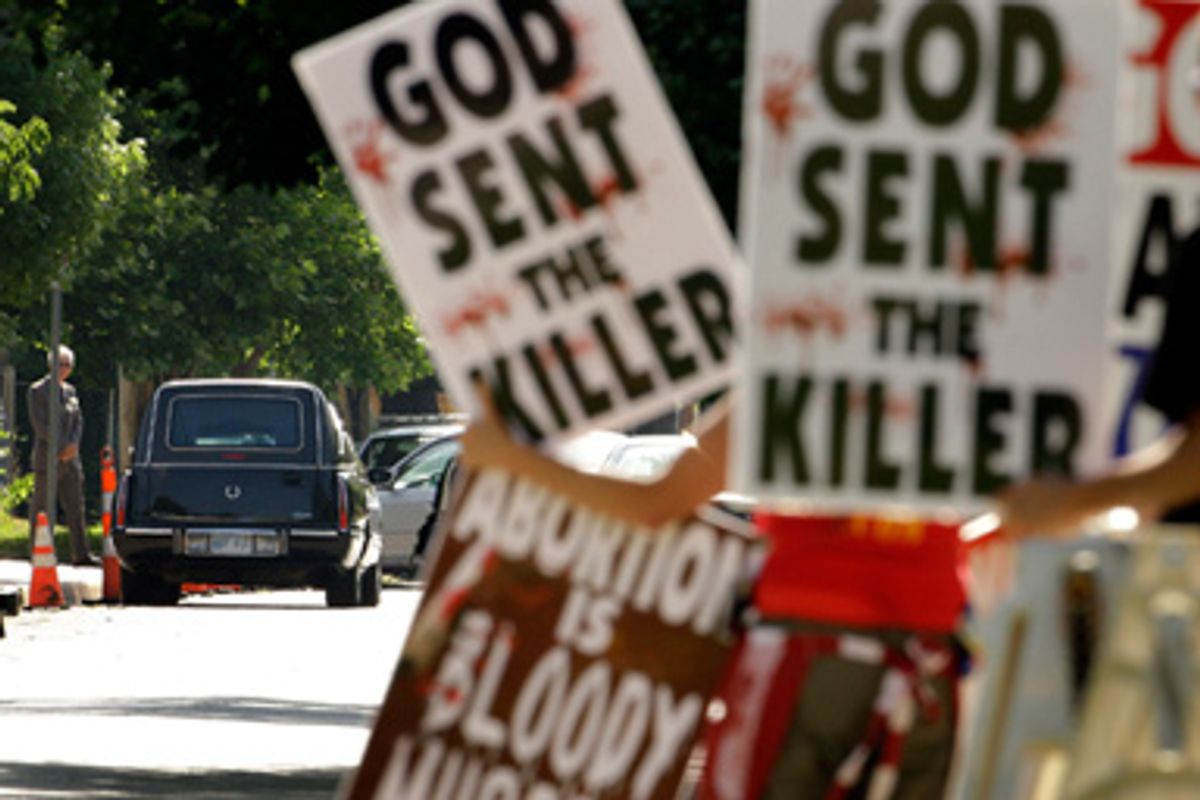 Since when do imprisoned terrorists get to hold press conferences? I speak of Scott Roeder, the accused assassin of Dr. George Tiller. Roeder's alleged crime was also a sacrilege: He gunned down the physician during Sunday worship services at Reformation Lutheran Church, where Tiller served as an usher.

A classic Midwestern lone demento, Roeder appears to envision himself as a soldier in an avenging army. They always do, don't they? Broke and alone, according to one of his ex-wives, Roeder ranted constantly against God's enemies, as defined by him. Police arresting him found explosives in his car, a 1993 Ford Taurus listed as his only asset.

Roeder phoned the AP from a Wichita jail cell to complain of poor treatment and to warn, "I know there are many other similar events planned around the country as long as abortion remains legal."

Sheriff's deputies will surely keep a closer eye on him. As for the warning, all it probably means is that Roeder is familiar with fellow extremists venting in Internet chat rooms. The prospect of a federal investigation into possible accomplices may have damped their enthusiasm, although some get off on feeling persecuted.

Meanwhile, hundreds of mourners attended Tiller's funeral, where they heard him "eulogized as a loving father and friend, a regular guy, a lover of Elvis and old movies, of ice cream and axioms," according to Fred Mann in the Wichita Eagle. Tiller's son described his murder this way: "I believe that God decided, 'You have done everything I asked a person to do here on earth. Now I will show the world what a loving, compassionate, courageous, selfless man you are.' And so it happened."

To antiabortion absolutists who dubbed him "Tiller the killer," this must be incomprehensible. Fox News viewers regularly heard him described as a "mass murderer" by bully-boy commentator Bill O'Reilly. He depicted Tiller as a conscienceless profiteer who "destroys fetuses for just about any reason right up until the birth date for $5,000."

Comparing Tiller to Hitler, Stalin and Osama bin Laden, O'Reilly argued that his unwillingness to turn over patient records to a crusading Kansas prosecutor made him an accomplice of pedophiles who impregnated children.

After a Wichita jury acquitted Tiller of violating Kansas law restricting late-term abortions, deliberating for only 45 minutes after days of testimony, O'Reilly all but pronounced the whole state guilty. "If I could get my hands on Tiller," O'Reilly thundered, "Well, you know. Can't be vigilantes. Can't do that. It's just a figure of speech. But despicable? Oh, my God. Oh, it doesn't get worse."

Like Operation Rescue founder Randall Terry, who'd moved his organization to Wichita largely for the purpose of harassing Tiller and his patients, O'Reilly spent last week denying responsibility. Not his fault, oh no.

Terry blamed the victim. "George Tiller was a mass murderer and horrifically, he reaped what he sowed," he said.

Then why did that Kansas jury acquit him? Essentially because while propagandists obscured it, Tiller's medical practice had almost nothing to do with abstract moral and theological arguments about when life begins.

Quite like the Terri Schiavo case, it had to do with irreparable tragedies at life's end: catastrophically deformed fetuses; pregnant children too young to carry a baby to term; suicidal, retarded or mentally ill victims of statutory rape; and women stricken by cancer or other deadly complications.

Who should make such heart-rending decisions? You? Me? Bill O'Reilly? Even the Vatican recently advised compassion in the case of a 9-year-old Brazilian child raped by her stepfather. But because such conditions often fail to become manifest until later in pregnancy, many doctors, out of religious conviction, fear or a simple lack of expertise cannot deal with them. To such patients and their families, Tiller seemed a kind of saint.

"George took them when they were not able to pay for his services," writes Dr. Bill Harrison in the Arkansas Times. A retired Fayetteville physician long-targeted by antiabortion activists, Harrison sometimes gave patients cash for the sorrowful drive to Wichita. To enter Tiller's clinic, they often had to pass through gantlets of screaming demonstrators.

On a Web site called "A Heartbreaking Choice," one patient writes how awful she felt being jeered by schoolchildren who had "no understanding of what we were going through but ... taught they had the right to judge us."

"I was afraid I would emerge from the clinic broken and unable to be fixed," she continues. "I thought I would lose my son, my marriage, and myself. I was also angry. I was angry with God that He 'let this happen.' I was angry with my husband that he couldn't fix it. Mostly I was angry with myself because I hadn't been able to save my son."

Something has gone badly wrong in a culture that turns such human tragedy into bombastic TV infotainment.