Did David Letterman get a free pass?

Just because you dislike Sarah Palin's politics doesn't mean you shouldn't defend her against sexism. 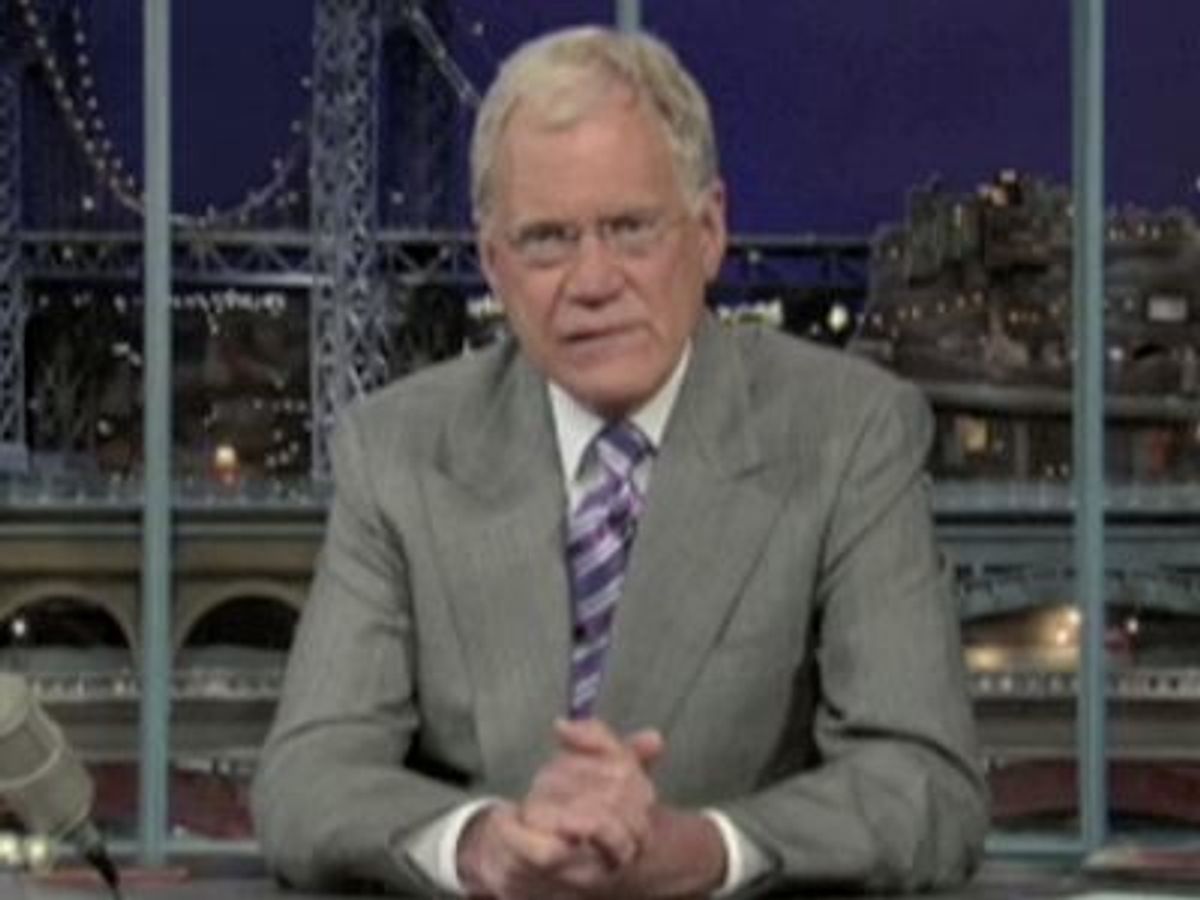 If there was any question that a stubborn strain of old-school sexism persists in Obama's America, one has only to look at certain leaders of what the right wing loves to call the "liberal media" but which is sounding and acting, recently, more like the frat-house media. There, like a virus hiding in the body before, perhaps, staging a comeback, misogyny has found a place to lurk almost undetected, at least by the usually sharp eyes of progressive feminists.

Examine the symptoms of this infection, beginning with David Letterman's comments (widely noted but insufficiently analyzed) about Sarah Palin "buying makeup at Bloomingdale's to update her slutty flight attendant look," as well as his joke about Palin's teenage daughter: "Sarah Palin went to a Yankees Game yesterday … during the seventh inning stretch, her daughter was knocked up by Alex Rodriguez." (Letterman insists he was talking about her 18-year-old daughter, Bristol, who actually had been, well, knocked up, not her 14-year-old, Willow, the daughter who attended the game.) A week before these remarks aired, there was an uglier outbreak of the contagion in the pages of Playboy -- never a bastion of egalitarian forward thinking, but still -- where writer Guy Cimbalo published a list of 10 conservative women he'd like to "hate fuck," a term that various observers interpreted as rough sex, sex tinged by rage, or rape. (Gabe Winant wrote for Broadsheet about the "Hate Fuck" story, which has since been yanked by Playboy.) Worse than the violence of the general sentiment was the graphic specificity of the "Hate Fuck Rating" appended to each woman -- a list that included Michelle Malkin, Elisabeth Hasselbeck, Dana Perino and Laura Ingraham. On Hasslebeck: "You'd be better served sucking off Regis Philbin." On Malkin: "Worse than fucking Eva Braun."

Both cases were met with a tepid response from the left. Though Letterman apologized on Wednesday’s show (see video below), his tone was mock-serious, and his audience chuckled along.

Imagine if, say, Michelle Obama, or Rachel Maddow, or Nancy Pelosi became the target of similar invective. The outcry from the left would be deafening. Shouldn’t liberals exhibit the same sort of decorous treatment we demand for ourselves? Sexist comments like Letterman’s and Cimbalo’s also evoke a troublingly insular, clubhouse atmosphere in lieu of an inclusive political party. What's more, the gender-based stereotypes they conjure are as stale and ignorant as any voiced by the old Neanderthal right: Pretty women are de facto stupid, sexually promiscuous and low-class. Indeed, it's the latter slight that has been least remarked upon and is, perhaps, the most disturbing. “Slutty flight attendant” is not just a sexual put-down; it's a socioeconomic one. Likewise, when Cimbalo says, of right-wing blogger Pamela Geller, "Even a Silkwood shower won't get rid of the stench of Fascist divorcee and Elizabeth Arden's Red Door," the classist sentiment is unmistakable. It's a combination of gutter misogyny and snobbery, a return to a 1950s kind of insult. This is like saying a woman has a "reputation," that she's "that kind of girl," one from "the wrong side of the tracks." Cimbalo seems to be holding his nose not at the smell of some supposedly déclassé perfume but at the stench of working for a living, of being middle-class or having middle-class tastes.

And what's the problem with sexy women, anyway? The facile answer is to say that female sexuality is threatening in some visceral, primitive way. But maybe the deeper fact is that pretty women remind us that the world is essentially unfair -- and if the world is unfair, then the progressive quest for fairness may be quixotic and unnatural. There is no more free market economy than your average singles bar. In any case, stern conservative strength in a woman has undone the left for ages: See Margaret Thatcher. Liberals would probably contend that these women present much to argue with, propounding odious views with real-world implications -- they do, they do -- but why not attack their ideas rather than insult them? Newt Gingrich and Rush Limbaugh incite their share of leftist rage, but I have yet to hear Gingrich maligned as a bimbo, or Limbaugh as a slut (just a "big fat idiot," to borrow a phrase from Al Franken, an impersonal and genderless slight). Partly, of course, this is because no such terms exist for men -- another digression entirely.

Asking why it is that liberal women do not often take liberal men to task for these attitudes is well worthwhile. Maybe we don't want to appear shrill and humorless, unable to take a joke. Or maybe it's thought that conservative women are too ideologically reprehensible to merit a defense. But to challenge this kind of sexist talk is not the same thing as agreeing with a woman's politics. If the left is allowed to remain a refuge for this sort of misogyny, if this virus in the body politic is allowed to flourish, then it is likely only a matter of time before it is once again directed at liberal women who are threatening in some way, as happened to Hillary Clinton. Call Pamela Geller racist for her anti-Islamic views, but leave her "top-heavy frame" aside.