Letterman and Palin: Both jerks!

The comedian's jokes about the Alaska governor and her daughter were out of line. So is her response. 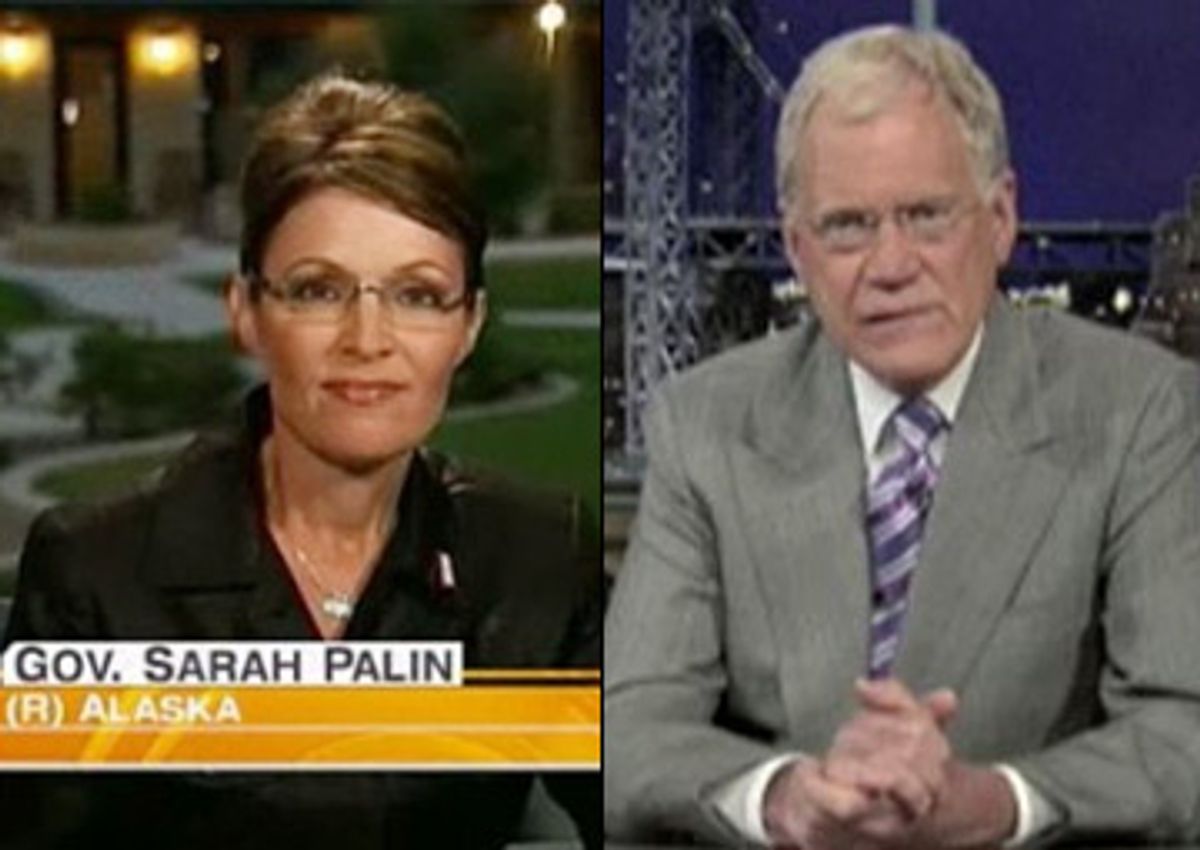 We are through the looking glass, people. I actually kind of agree with Sarah Palin. Kind of. On the "Today" show this morning, she continued taking Letterman to task for his recent sexist remarks -- calling Palin "slutty" and making a crack about Alex Rodriguez knocking up an unnamed Palin daughter during a baseball game -- using language that was well nigh feminist. Regardless of any excuses Letterman has offered, she said, "It was a degrading comment about a young woman." Agreed. "It's a sad commentary on where we are as a culture, as a society," that people laugh at cheap, misogynistic jokes. Yep! Such jokes, as expressions of systematic sexism (which, OK, she didn't say), contribute to "the acceptance of abuse of young women." Yes, yes they do, actually. "I would hope that people really start -- really rising up and deciding it's not acceptable." Me too!

But, of course, she couldn't possibly quit while she was ahead.

The problem is, the daughter who attended the ballgame with her was 14-year-old Willow, but Letterman has stated the nasty joke was meant to be about 18-year-old Bristol. On his show Wednesday, Letterman said, "I can't really defend the joke, I agree, unpleasant, ugly, but I would never, never think that it was funny to use a 14-year-old girl as joke like this, for God's sake." There is no reason on earth to assume Letterman's lying about that -- Bristol, not Willow, has spent the last year being the poster child for teen pregnancy -- so naturally, that's exactly what Palin assumes. She called Matt Lauer "extremely naive" for taking Letterman's explanation of his genuine mistake (as opposed to his jerky behavior, which is a separate issue) at face value. Both she and her husband, Todd, have been framing this as a joke that makes light of statutory rape, as opposed to the mean-spirited, sexist, wholly inappropriate joke about an 18-year-old it actually was. Todd said in a statement yesterday, "Regardless of which Palin daughter it was, Bristol, Willow or Piper, these sexually perverted comments are outside the acceptance of mainstream America." Dude, what? Did you really just drag little Piper into this, too?

Therein lies the problem with trying to defend Sarah Palin from a feminist perspective. She and her daughters do not deserve sexist attacks any more than Hillary Clinton, Gloria Steinem or your mom do, and she's absolutely right that what Letterman said was out of line and indefensible. She's absolutely right that jokes like that contribute to an oppressive culture for women and young girls. But on this rare occasion when she's absolutely right about a couple of things, she can't just stop there. She has to blow straight past reasonable outrage and into disingenuous, over-the-top accusations.

Earlier this week, a Palin spokesperson said in a statement, "It would be wise to keep Willow away from David Letterman." When Lauer asked her about that, she said, "Hey, take it however you want to take it." OK, here's how I take it: You're implying that Letterman's a pedophile. Nice. See also: calling the jokes "sexually perverted," which they weren't, instead of "sexist and tasteless," which they were. So now here I am, inspired to defend Letterman from spurious attacks on his character, when I should be reinforcing the accurate attacks on his character in response to his spurious and sexist attacks on yours and your oldest daughter's. Why do you torment me so, Sarah Palin? Letterman said unequivocally offensive things, and he deserves to be condemned for them. But now, so have you, which complicates the matter of defending you as a fellow woman. Don't get me wrong; I will always denounce anyone who calls you a slut, or any other misogynistic slur. You don't deserve it, and that crap hurts all women. But if someone wants to call you a liar and a loon? You're on your own, lady.