A table for few at T.G.I. Friday's

The restaurant chains of the "casual dining" industry were already in trouble. Then came the recession. 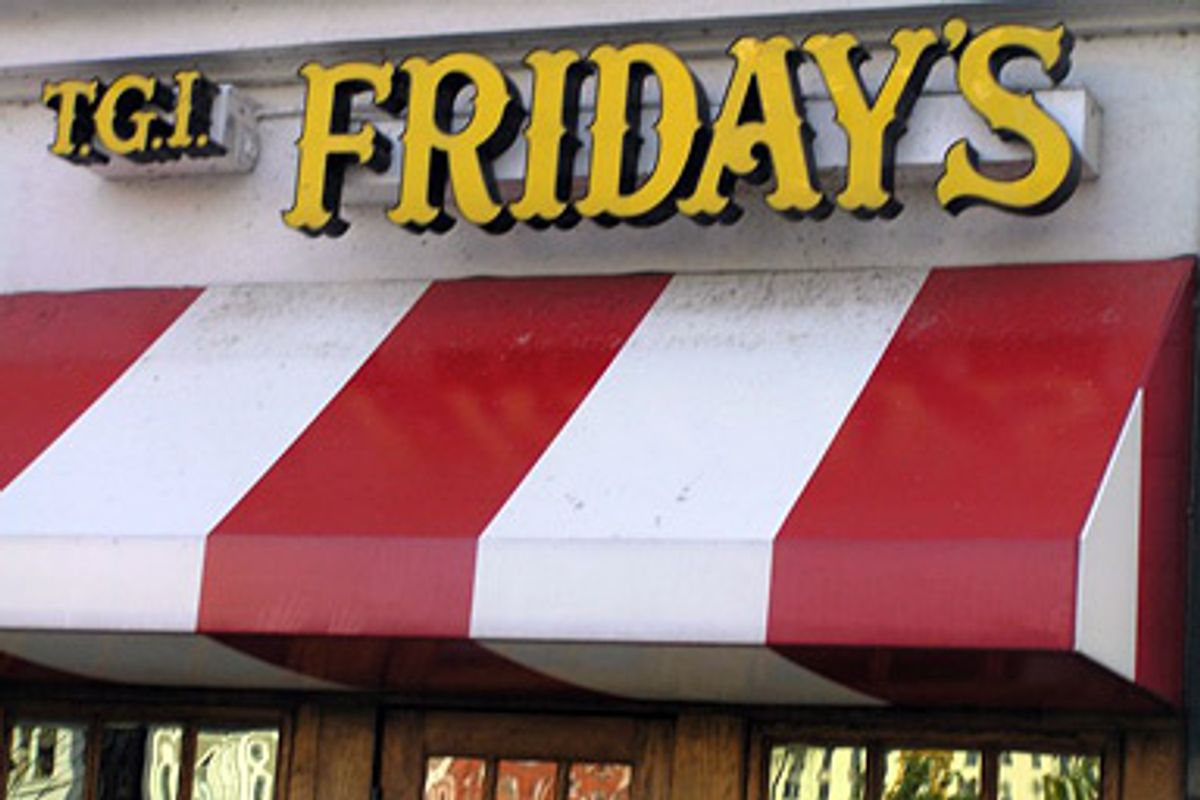 One of my best friends in college worked at T.G.I. Friday's as a cook, though he would never dignify it with that term. "I was an assembly-line worker," he recalls. He relied on a grill for meats, a couple of deep-fryers for appetizers, and a flotilla of microwaves for everything else. In the six years he worked there, the only skill he learned -- the only skill he needed -- was "not burning anything."

Of course, when we're talking about BBQ Pork Ravioli Bites, preparation may be beside the point. Friday's and its ilk trade in the kind of middlebrow mall fare and managed smiles so ably parodied in the movie "Office Space." These chains elicit not the loathing of a Blockbuster, but a head-shaking chuckle, and the self-loathing of indulging in caloric disasters like the Awesome Blossom.

Still, it's been a rough couple of years for Friday's. Though it is a private company, and data is closely held, it's known that locations across the country have closed. The Friday's in New York's financial district shut down for only a few days, but that was because a bartender was allegedly selling cocaine. In 2008, because of an intra-family feud, Carlson Companies, the family-run firm that owns the Friday's brand (and about half of all the individual Friday's outlets), had to hire a CEO who was not a Carlson for the first time. And a customer found a snake's head in his broccoli.

But the most telling sign of Friday's struggles has been its lack of cohesive corporate strategy. In addition to the (alarmingly titled) Give Me More Stripes rewards program, the chain has cooked up the following promotions in 2009: 10 Meals for $9.99; Buy One Lunch, Get One Free; Five Cent Appetizers; and the World's Largest Inauguration Party. For the month of May, Friday's unveiled its most desperate promotion yet -- it would offer all 16 full-portion sandwiches and salads for $5, its lowest price since the first Friday's opened in 1965. Friday's isn't looking for a strategy, it's looking for a savior.

In the restaurant business, though, who isn't? As USA Today reported last month, restaurant sales have declined for 10 straight months, and customer traffic for 19 straight months. Now, a new study making waves within the industry suggests that four out of 10 chains could fold within the next year due to massive debt and rising commodity and energy prices.

While many companies are facing these problems, it's even worse for Friday's and other "casual dining" chains. The classic definition of casual dining includes sit-down service, alcohol, almost mythical portion sizes, and a check between $10 and $25 per person -- and you can see part of the problem right there. The most obvious reason for Friday's struggles is that people need to cut costs, which can mean cooking at home or driving through McDonald's.

But casual dining's struggles actually predate the recession. In 2002, the sector did $100 billion in business. By 2008, that number had dropped to $75 billion, and Friday's fits this pattern. Back in 2003, slumping sales forced the chain into a $200 million "revitalization" campaign, dumping its brown-wood look in favor of sleeker steel and glass. Friday's finished remodeling just as things began to fall apart. Recently, an analyst at Morgan Stanley predicted that of the nation's 81,000 casual dining restaurants, at least 1,200 -- from any and all chains -- will need to close.

When the first Friday's opened in Manhattan in 1965, at the corner of 63rd and First Avenue, it was a singles bar. In fact, it was the singles bar, according to contemporary press accounts, which made it sound like the set of "Cocktail." As similar restaurants opened (Chili's in 1975, Applebee's in 1980), an oak-paneled genre, heavy on the faux-Tiffany and secretary drinks, was born. Friday's grew quickly, its red-and-white awnings sprouting in the South, then in the Midwest, hitting 100 restaurants by 1984. By 2006 it had expanded to more than 800 restaurants in almost 60 countries, and become one of "America's Greatest Brands," at least according to the American Brands Council.

It had also widened its appeal from singles and siphoned customers away from the fine-dining sector. Unfortunately, so had all the other endlessly replicating casual dining chains, to the point that analysts now complain about how they "lack sufficient differentiation." Bennigan's, which keeps trying to die, even if a few franchises won't quite let it, self-identified as an Irish pub, but it served the same steaks, shrimp and fried, cheesy, quasi-Southwestern appetizers as Friday's and everyone else. Indeed, if pressed to isolate something exceptional about Friday's, besides its primacy, the best I could do is Most Shameless. The chain engages in ferocious cross-marketing, pushing "Ultimate" items endorsed by the Food Network or entrees based on the Jack Daniel's World Championship Invitational Barbecue. Friday's was the first chain to partner with the Atkins Diet.

Why did this formula, where the menu and the atmosphere emphasize coverage over quality, work so well once upon a time? I visited a Friday's last week, in a chain-choked strip of Orange, Conn., to find out. On a Friday night at 7:30, there was no wait. In fact, an entire wing of the restaurant sat empty. The food, to this eater, at least, did not measure up to casual-dining competitors Texas Roadhouse or Ruby Tuesday and its salad bar. (And it looks like Consumer Reports will back me on this in its July restaurant issue.) I tried the Jack Daniels Burger, served with the dark, syrupy-sweet sauce that is the lifeblood of Friday's menu, and the best I can say is that it was cheap and filling. Thanks to Friday's latest promotion, "Buy One Entree, Get One Free," my wife and I ate for $13.15 plus tip.

We made it about six minutes before the first "Birthday Song," where Friday's staff marches out to clap and chant for one lucky customer. In the hour we were there, this happened no less than five times, and I think it starts to get at the chain's appeal. The buzz of conversation, in English and in Spanish, never let up, and there did seem to be a festive atmosphere. Perhaps Friday's works in the same way as its birthday routine -- bland, predictable, but still loud and fun.

There are also practical considerations. Chains like Friday's draw on singles bars, sports pubs and family dining, and if the model ends up dulling each part, there's still a convenience in finding them together. Parents can drink without worrying about drunks (and on my visit, a highchair seemed to block every aisle). Large groups can bank on a wide selection that leaves no one rapturous, but no one angry, either. Also, lest we forget, Friday's is the chain of choice of Kevin Federline -- its dress code remains flexible, and I saw nothing above jeans, along with a not insignificant number of sweat pants.

If these are the best defenses casual dining can offer, though, it's in more trouble than we thought. First, they obviously limit its audience -- and, worse, limit it to groups getting killed by the recession. Casual dining has always counted suburban baby boomers and lower-income families as its base. (For example, more than a third of Applebee's customers earn household incomes of less than $50,000 a year.) There's nothing wrong with this, of course, except that retirement-scared boomers and lower-income workers have been the first to cut back on spending.

To be fair, these two groups include a whole lot of Americans. But as recently as 2007, Friday's and its culinary brethren were actually focused on upgrading their clientele -- remodeling restaurants, adding more expensive food, even phasing out coupons and promotions. And this brings us to the second, long-term problem with Friday's formula. Even if Friday's had better demographics, even if it didn't have to worry about the death of malls and the birth of "fast-casual" places like Panera and Chipotle -- no waiters, a cut above fast food -- the chain has diversified itself into a corner. And it doesn't have a clue where to go next.

Casual-dining execs talk about innovation, evolution and, yes, a few failures; they parrot the rhetoric of "never letting a serious crisis go to waste." But, honestly, what can they change? Thanks to their all-inclusive nature, they can't expand the menu or the experience. They certainly can't increase the kitsch. So Friday's only option is to offer last-ditch discounts, where it sells a $12 sandwich for a Subway-like $5 without altering its underlying formula. This might prolong the chain's death, but it won't prevent it -- not in a land where, in the last 20 years, the number of restaurants has increased at twice the rate of the population.

Craig Fehrman is working on a book about presidents and their books.