Ahmadinejad reelected under cloud of fraud

But outcome doesn't change goals for Obama -- dealing with Iran's nuclear program and its anti-Israel activities. 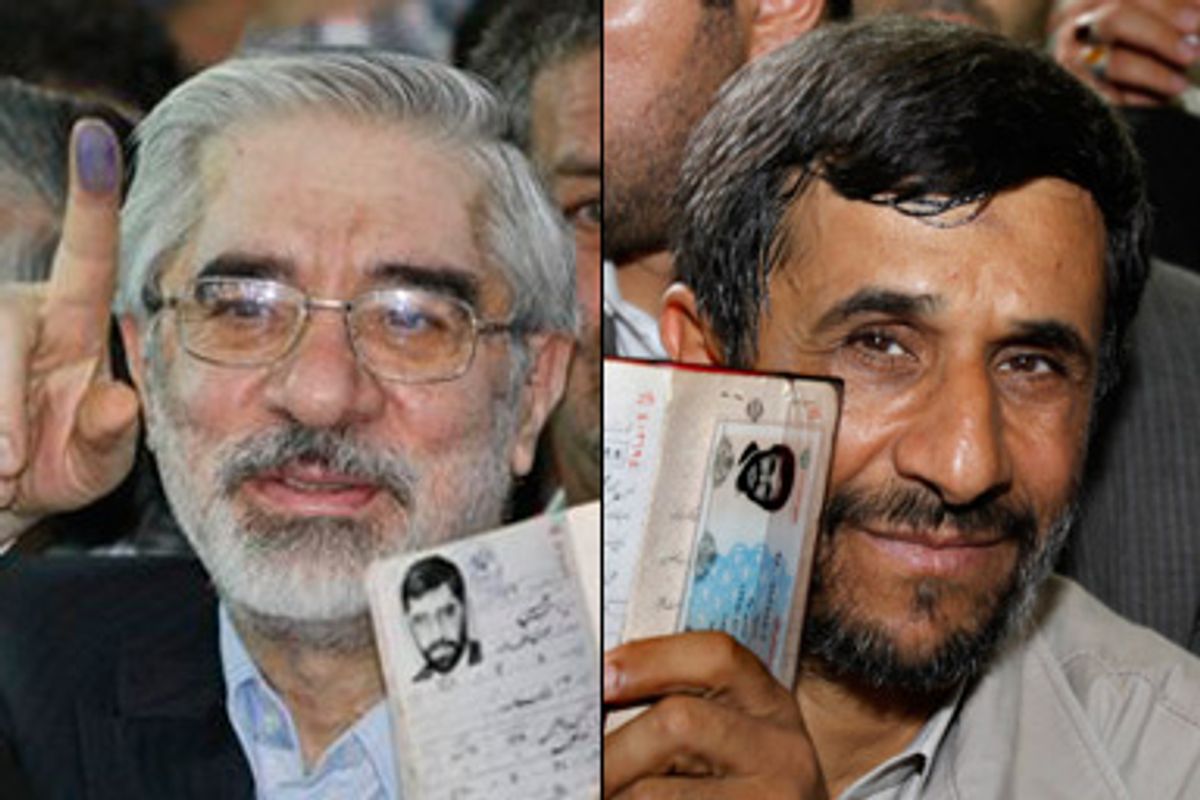 A few thousand Iranian young people demonstrated in Iran on Saturday morning to protest the announcement by that country's Interior Ministry that President Mahmoud Ahmadinejad had won a second term by an overwhelming margin of 63 percent. The president's rivals decried ballot fraud and many observers saw the results as a hard-liner coup. If the government really has descended to the level of fixing the presidential elections, it is a sign of deep insecurity and fear of change, as Tehran is challenged by the Obama administration's outreach and by reformist stirrings among youth and women.

Obama administration officials were privately casting doubt on the announced vote tallies. They pointed out that it was unlikely that Ahmadinejad had defeated his chief opponent, Mir-Hossein Moussavi, by a margin of 57 percent, in Moussavi's own home city of Tabriz. Nor is it plausible, as claimed, that Ahmadinejad won a majority of votes in the capital, Tehran, from which he hails. The final tally also gave only 320,000 votes to the other reformist candidate, Mehdi Karoubi, who had helped force Ahmadinejad into a runoff election when he ran in 2005. It seems odd that he get less than 1 percent of the votes in this round. Karoubi, an ethnic Lur from Iran's west, was even alleged to have done poorly in those provinces.

The final vote counts alleged for cities and provinces, even more so than the landslide claimed by the incumbent nationally, strongly suggest a last-minute and clumsy fraud. A carefully planned theft of the election would at least have conceded Tabriz to Moussavi and the rural western Iranian villages to Karoubi.

Supreme Leader Ali Khamenei quickly recognized Ahmadinejad's victory, hailing a remarkable turnout of 80 percent of eligible voters. With the backing of the clerical supreme leader, Ahmadinejad's victory is unassailable in the theocratic Iranian system, where Shiite clerics hold ultimate power. In the past decade, despite occasional demonstrations launched by students, the regime has easily been able to repress dissent with right-wing popular militias and other pro-conservative paramilitaries. They also succeeded in excluding reformists from political power by denying them the right to run for office on the grounds that they do not pass an ideological litmus test. The repressive abilities of the hard-liners should not be underestimated, despite the public anger over a possibly stolen election.

The primary challenger to incumbent Ahmadinejad, former Prime Minister Mir-Hossein Moussavi, was widely thought to have a number of crucial constituencies behind him. Urban youth and women, who had elected a reformist president in 1997 and 2001, showed enthusiasm for Moussavi. He also showed an ability to bring out big crowds in his native Azerbaijan, where a Turkic language, Azeri, is spoken rather than Persian. (Azeris constitute about a third of the Iranian population.) It was expected that if the turnout was large, that would help Moussavi.

But not only did Iran's Electoral Commission announce that Ahmadinejad had won almost two-thirds of the general vote, it also gave him big majorities in major cities such as Tehran and Tabriz (the latter is the capital of Azerbaijan). These results seemed unbelievable not only to Moussavi supporters but to many professional Iran observers. Although candidates in Iran's presidential elections are closely vetted, and only four out of hundreds of applicants were allowed to run this time, once the candidates were certified the elections have been relatively free and fair in the past. If proved true, electoral fraud on the scale being charged by Ahmadinejad's rivals risks further undermining the legitimacy of the regime in the eyes of the public.

Less was at stake in these elections than many outsiders assumed, however, since the Iranian presidency is weak and most important policy is set by Iran's supreme leader, Ali Khamenei (his title is the giveaway). The election was mostly about style, rather than substance. Mir-Hossein Moussavi complained that Ahmadinejad's bizarre downplaying of the Holocaust had made Iran a laughingstock, and that the incumbent had dictatorial tendencies. But he expressed support for the Palestinians. He objected to the cost of ramping up Iran's civilian nuclear energy research program, though he said he was committed to continuing it at a slower pace. He offered to negotiate with American President Barack Obama if the latter was found to be acting in good faith. But most of his differences with Ahmadinejad were on domestic policy, including his advocacy of more personal liberties, more rights for women, and a freer media environment, including private television channels.

The outcome of the election therefore changes little for the Obama administration. The outstanding issues between Iran and the U.S. mainly have to do with Iran's support for the Palestinians against Israel and with Iran's nuclear enrichment program, which Washington fears could ultimately be put to dual use and eventuate in a nuclear warhead. Those two outstanding issues would have remained no matter who won the presidency. Obama is determined to deal with them by undercutting Iran on the Palestine issue by making strides toward a Palestinian state, by avoiding military confrontation, and by direct talks over better safeguards that Iran's nuclear program remains purely civilian in character. These policies are the most promising ones for achieving U.S. and NATO goals with regard to Iran, and should be pursued regardless of who holds the weak and ineffectual office of president in Tehran.