States are pushing ahead with their own reforms instead of waiting for the president to act. 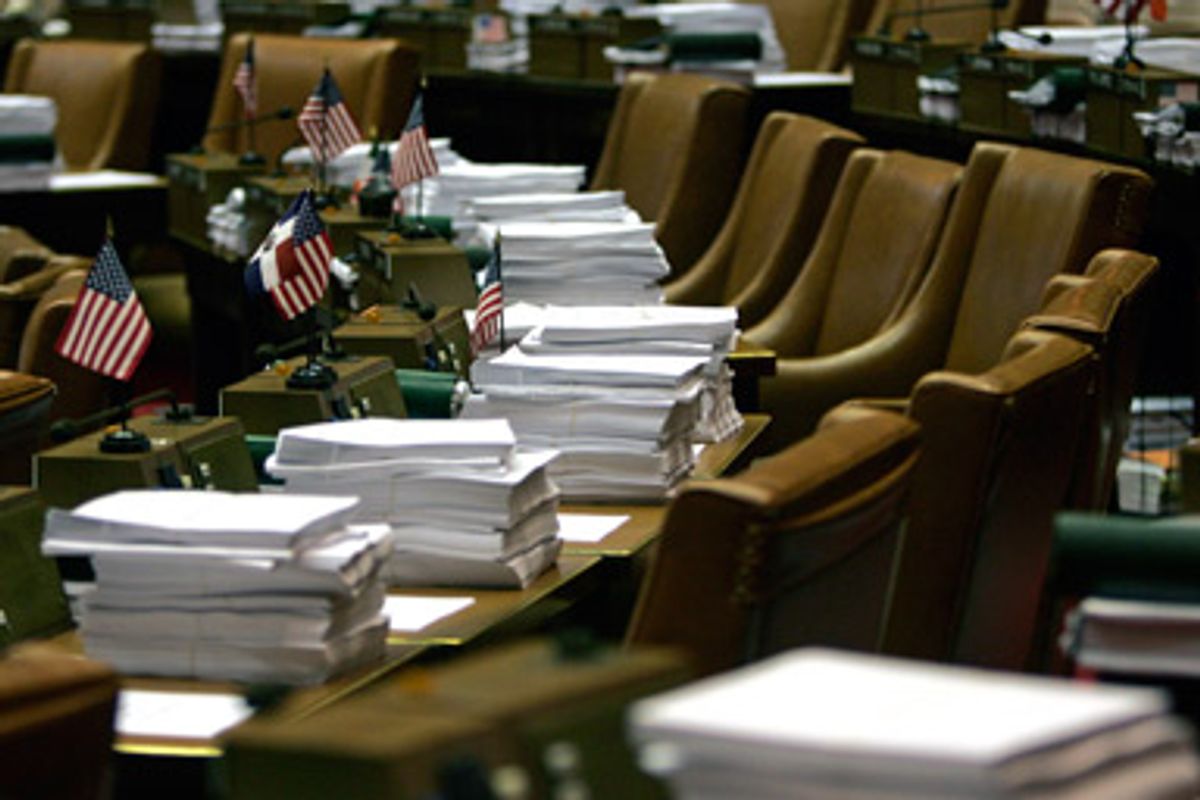 Budget bills are piled on legislators' desks in the Assembly Chamber at the Capitol in Albany, N.Y., Monday, March 30, 2009.
--

Colorado's Bill Ritter (D) is a typical swing-state governor in these most atypical times: overly cautious, predictably equivocal -- you know the type. Upon getting himself elected in 2006, he promised to pass legislation that "provides every Coloradan with access to some basic form of health insurance and health care by 2010." One year later, with America gorging on a presidential hoopla, Ritter backed off the pledge because, as the Denver Post reported, he believes America should wait for President Obama to act.

The White House worship that led this politician to renege on a concrete promise is an all-too-common pass-the-buck cop-out in a nation whose federalist system imagined states as "laboratories of democracy." Why hold state elections if state lawmakers are just going to wait for Washington to hand down federal panaceas?

Well, because thankfully, not every state lawmaker is Colorado's governor. Though a Beltway-obsessed media might not care, and though the Bill Ritters may defer to the White House, state lawmakers all over America aren't waiting for President Obama to change the country -- they are changing things all on their own.

In New York, the most stratified state, rampant inequality epitomizes the national gap between rich and poor that Obama promised to narrow. Democratic legislators there recently passed legislation slightly increasing taxes on those making over $200,000 a year, and raising $4 billion in revenue in the process.

Frank Sinatra once said if something can make it in New York, it can make it anywhere -- and at least seven other states are considering similarly progressive tax reforms. That's particularly encouraging in these tough economic times. As the Center on Budget and Policy Priorities has documented, states that enacted progressive tax increases during the economic downturn between 2002 and 2004 experienced stronger personal income growth than other states while also increasing revenues.

Speaking of revenues and income, President Obama's Labor Department is slowly ramping up federal wage enforcement -- a move that mirrors the states. This year, 10 states passed or considered legislation increasing fines on businesses that illegally misclassify workers as independent contractors so as to avoid paying taxes and employee benefits.

Then there are criminal justice and drug policy challenges that Washington doesn't want to talk about at all, but that budget-strapped states are forced to deal with because of skyrocketing prison expenses. New Mexico legislators, for instance, cited the high cost of death penalty cases when passing a bill making their state the 15th to ban capital punishment. Reacting to proposals that would decriminalize marijuana and generate more than $1 billion in new tax revenue, California's Arnold Schwarzenegger (R) became the first governor to call for studies on legalizing cannabis for recreational use. And New York lawmakers finally began reforming their infamously draconian Rockefeller drug sentencing statutes.

Even on vexing issues like healthcare, as D.C.'s discussion only just begins, states have long been expanding their public health systems and toughening regulation. Just last month, Wyoming closed loopholes allowing insurers to deny medical coverage for almost any reason and Washington state created a commission to construct a universal healthcare system by 2014. Meanwhile, in lieu of universal healthcare, Gov. Ritter at least agreed to sign a bill expanding Medicaid to 100,000 additional Coloradoans.

It is, of course, easy to forget state legislatures at a time when newspapers are slashing local coverage and, thus, more Americans know the name of the Obamas' dog than the name of their state representative. But no president, no matter how media dominant, invalidates the principle that "all politics are local." While change may seem to come only from Washington, change is already here in our state capitals.