Letter from Tehran: The day after

A report from the Iranian capital in the aftermath of Ahmadinejad's "victory." 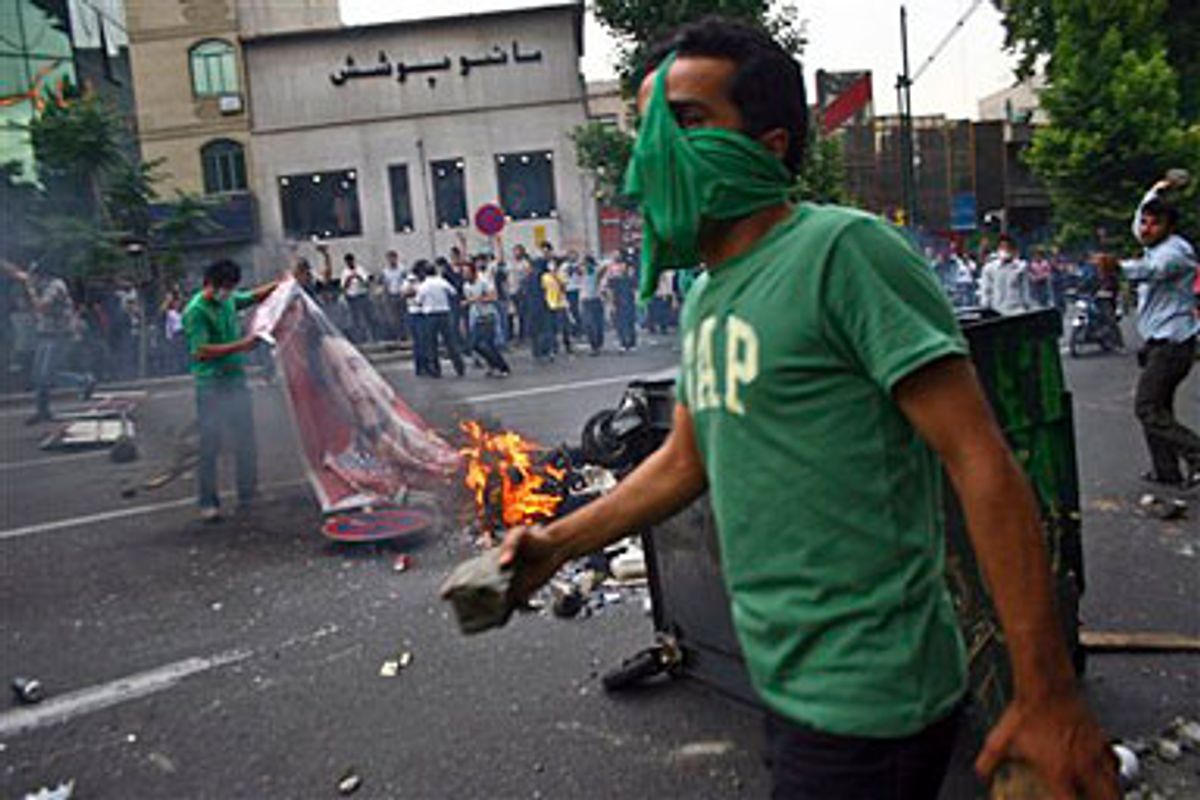 It's becoming increasingly clear that this was a palace coup, a palace coup in the style of Peru's Fujimori. The Guardian Council has to accept the election results. All eyes are now on Hashemi Rafsanjani, who has apparently just resigned as chairman of the Expediency Council. He was the sole member of the original "yaran" of Khomeini, or Khomeini's original team, with power and influence. Hossein Mousavi is under house arrest.

In the streets, the mood is incredibly tense and eminently explosive. In Vali Asr square Saturday afternoon, under darkening skies, crowds had gathered as well as cops. It was as if each side knew that a fight had to occur but were uncertain when to start. Cops made the first move by occasionally running into the crowd with batons swinging, telling them to leave the area. People would bolt then rush back, cat and mouse, cat and mouse. They weren't just running away, though. I personally witnessed a cop fall to the ground after he swung his baton. Immediately two young men jumped on top of him and began pounding on him, then ran away. Trash cans are being set on fire, folks are busting windows, chanting "death to the dictator." The chants have not yet escalated beyond this point -- the demand is that their vote be respected.

Matters soon escalated. A hapless "basiji" [volunteer paramilitary] was fingered by the crowd and began to receive a brutal punishment, being kicked, shoved, punched by what seemed like a thousand hands. Only the arrival of a phalanx of special riot police on motorcycles, batons swinging and decked out in what the New York Times referred to as black Robo-Cop gear, saved this man's life. By nightfall the situation had become worse. Iranians had become the very Palestinians their government has for so long supported. Rocks were prepared to throw at the police, storefront windows were shattered, stores were set on fire.

There is a scheduled noon prayer by the Mousavi supporters Sunday, to take place in front of campaign headquarters in Fatima Square. Ahmadinejad is scheduled to attended a celebration in Vali Asr Square today at 5, in honor of the elections and Mother's Day, which in Iran coincides with the birthday of Fatima, daughter of the Holy Prophet.

It is, however, a mistake to think that any restoration of the election results will occur. The battle is elsewhere now and while the obvious theft of the election has enraged and disappointed millions, the action now is to demonstrate that folks aren't just going to take it. This was clearly a bad strategy on the part of the leadership as they could have easily given another 10 to 20 years of energy to the system by sacrificing the current president. Legitimacy, much debated by social scientists, actually turns out to matter. It's not just force that rules, though that appears to be the case right now in Iran. Short-term calculations (get rid of the old generation of leadership for a new breed of revolutionary) will prove to be disastrous. Nine-year old sons accompanied their fathers to vote, standing in line for hours. That disappointment will not be easily remedied -- it will never be healed.

It is a remarkable turn of events. But one thing is for certain, the many millions who showed up to vote, a great many for the first time ever, were not fooled. Their vote counted because it made the situation black and white. If they had not voted, then Dr. A would have won anyways. Now they know.

The 22 of Khordad, June 12, will be an important date in Iran, particularly because, as I've noted, this vote wasn't just college students causing a ruckus. Grandmothers, fathers, daughters, and moms all showed up to stand for hours on end. They will not be just passive observers of what the "kids" are doing.