Supreme Leader Khamenei is a target of the opposition -- the result of a growing split in Iranian society. 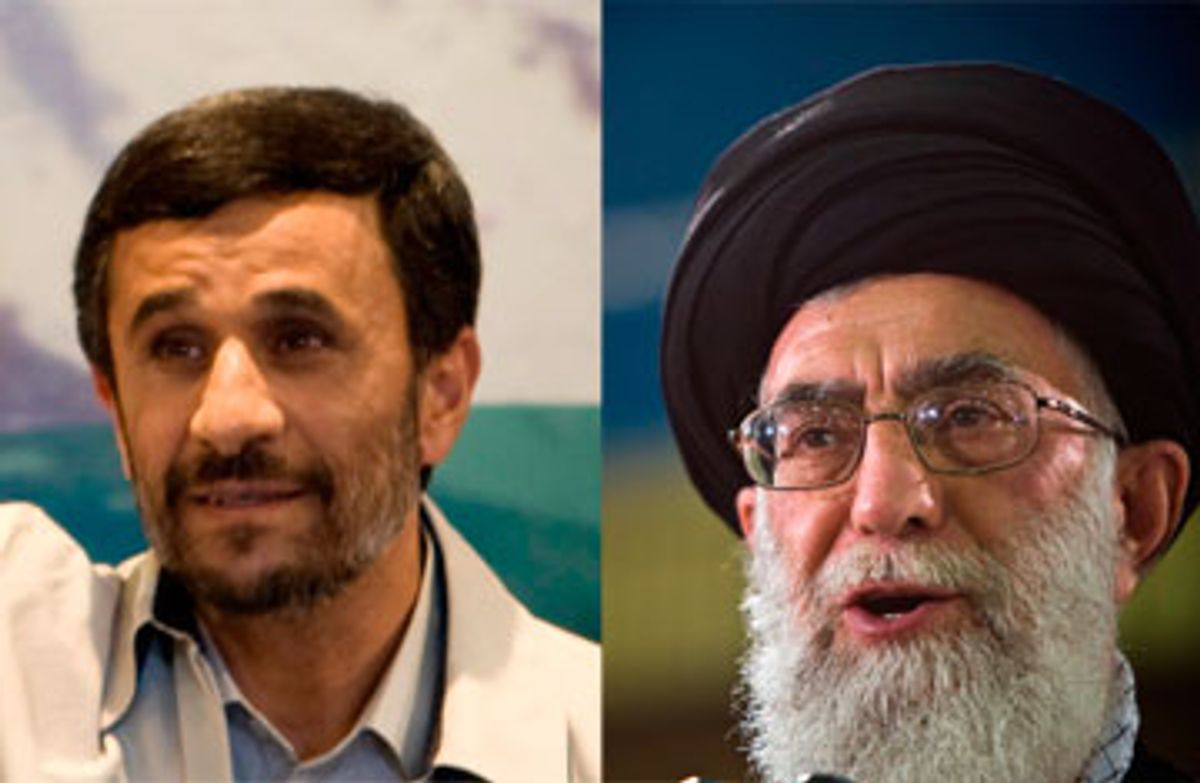 The success of Iranian Supreme Leader Ayatollah Ali Khamenei was never predicated on his authority as a religious scholar. There are a number of Shiite clerics who are superior to him in the pecking order. Charisma is also not a characteristic frequently associated with Iran's religious leader.

Rather, Khamenei's power stems largely from his skills as a strategist. Since his election as the almost untouchable leader of the Islamic republic in 1989, Khamenei has proven remarkably adept at courting his political opponents, thereby avoiding open conflict. Few pursued consensus as arduously as Khamenei.

In recent years, however, as this consensus has become more virtual than real, the position of Iran's leader has been eroded. Indeed, the current street battles are symptomatic of that erosion. Tears in the country's religious establishment have become ever more visible in Iran's recent past, the gap between the country's rich and poor has widened, and the chasm between the Western-oriented youth and the religious fanatics has deepened. Indeed, the current crisis could very well spell the beginning of the end for the Khamenei system.

The demonstrations in Tehran and elsewhere are not just in protest against President Mahmoud Ahmadinejad, who was declared the official winner of Friday presidential elections despite opposition charges that the election was fixed. Rather, the protest is also against Khamenei himself, a leader who has lost all connection to large swaths of younger Iranians. He seems not to have noticed the yearning for more openness, more freedom -- and for jobs with a future.

The unrest is even more ominous for Khamenei and the Iranian theocracy because it clearly demonstrates how split the regime's elite really are. On one side are the deeply religious and the fanatic pro-revolutionaries. On the other stand the reformers, the most popular of whom has been the former president of Iran Mohammad Khatami.

It is possible that the current conflict could have been avoided had the "third path" model developed by those in power not crumbled in the face of personal rivalries. The idea, based on the Chinese precedent, called for moderate conservatives to usher in a modernized, privatized economy along with a partially liberalized society.

But Khamenei himself is one of the main reasons the strategy failed. He committed the decisive error in the run up to elections four years ago. Former President Hashemi Rafsanjani had been hoping to stage a comeback as the embodiment of the Chinese model. Prior to Khatami, he had governed Iran for eight years -- and he wanted another term.

Khamenei wanted to prevent Rafsanjani from attaining the highest political office at all costs. If he were elected again as president it would have posed a threat to his own influence. Even without the presidency, Rafsanjani was regarded as the second most powerful man in Iran.

Khamenei followed Rafsanjani's candidacy with skepticism, though he refrained from giving voice to his objection. Ahmadinejad's candidacy, on the other hand, suited him. Were the young engineer to win, Khamenei could be assured of his veneration. Indeed, soon after Ahmadinejad's inauguration for his first term in office, he demonstrably kissed Khamenei on the hand. Since then, Ahmadinejad has been Khamenei's man, despite attempts at keeping a formal distance in the run up to this election.

Still, it became clear early on that Ahmadinejad was not going to act like Khamenei's obedient employee. Indeed, that fact quickly became one of Khamenei's greatest leadership problems in the last four years. Supporting Mir Hossein Mousavi, however, was not an option. The opposition leader's mentor, after all, is none other than Rafsanjani.

It is said that preventing Ahmadinejad from winning a second term was a top priority for Rafsanjani. He pumped money, advisors and the weight of his influence into the candidacy of opposition leader Mousavi. The fact that Mousavi also had the blessing of the reformer Khatami quickly turned him into an icon for the opposition movement. Indeed, Mousavi, hardly a radical reformer, could very well have been a useful embodiment of Khamenei's preferred third path.

But Khamenei, it became clear, began shying away from the path of controlled reform, for fear that it could become uncontrollable. The images of Mousavi's euphoric followers, with their green headbands and headscarves, were impressive. This "green tsunami" threatened to sweep away not just Ahmadinejad but him too. On election night Khamenei interpreted Ahmadinejad's victory as a triumph of the theocratic state and of his system. Concerns that Ahmadinejad and his apparatus may have manipulated the vote was, initially, merely a minor concern.

From the ballot box to the streets

It remains unclear how many people actually voted for Mousavi. The challenger claims that Ahmadinejad stole his victory. Mousavi is claiming he got double the 34 percent reported by the election commission. And now the battle has moved from the ballot box to the streets. Over the weekend, the largest public protests since the fall of the Shah 30 years ago took place in Tehran.

Iran's consensus politics of the past created the illusory hope there might be some kind of political compromise after the election. But the anticipation that built up was too great -- and the stakes were large for both parties. The fighting on the streets isn't just between supporters of the reforms and hardliners. Behind the scenes, the different wings of the government are fighting over the best path forward to ensure theocratic Iran's survival.

If its leader, Khamenei, wants to save his system, he is going to have to mend the deep rift that has opened up. To do so, he will need to get Mousavi and his mentors Rafsanjani and Khatami back on his side. Either that or he will have to clear them out of his way. But even for a man described by the Iranian constitution as "God's representative on earth," that would be a suicide mission. And Khamenei, who just gave his blessing to Ahmadinejad's re-election, isn't likely to do anything that would directly harm the president.

Currently, Khamenei is showing loyalty to his protégé and appears to have decided in favor of confrontation rather than compromise. But even if Khamenei manages to find a compromise in the end, it will likely be only an illusory one. That it can hold for an additional four years with Ahmadinejad in office seems wishful thinking.