Speaking to the AMA, the president talks tough on healthcare reform 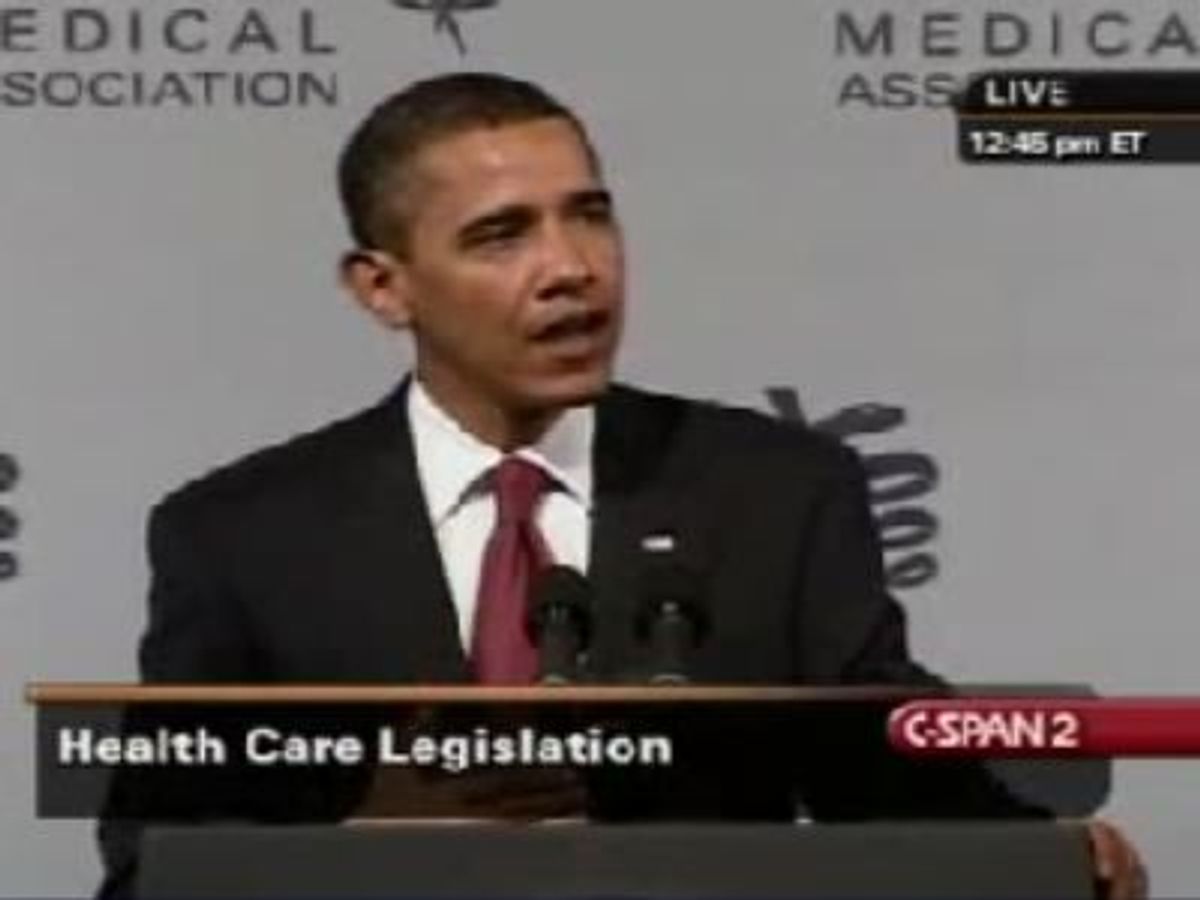 If you're going to make a speech about healthcare reform, and advocate for sweeping change, there are friendlier venues out there than the American Medical Association. The AMA has historically been a key opponent of reform. But at the same time, because it represents so many of America's medical professionals, the organization could play a pivotal role in whatever reform does get done. So on Monday, for his biggest speech on healthcare yet, President Obama went to the AMA.

It could have made for a rough day. But Obama is, often enough, actually at his best when speaking to an audience primed to disagree with him. He was certainly in fine form Monday -- jousting with the crowd, poking fun at them and at himself in a disarming way, appealing to them at some times and, at others, acknowledging inevitable disagreement. And, for his efforts, the president was rewarded with a surprisingly warm reaction.

The speech, which clocked in as the longest of Obama's presidency thus far, covered quite a bit of ground: The president went from making a case for why reform is necessary to saying that, under his plan, "if you like your doctor, you will be able to keep your doctor" and then to talk of doing a better job with medical records, investing more in preventive care and studying the efficiency of treatments. He talked about ways to decrease doctors' fear of malpractice suits -- without capping awards to plaintiffs -- and supported a public option and a mandate that all Americans get insurance, while at he same time dismissing the idea that he's proposing a single-payer system. He even quoted former House Speaker Newt Gingrich.

But at its root, the speech was about the urgency, in Obama's mind, of getting reform done now.

"If we do not fix our health care system, America may go the way of GM; paying more, getting less, and going broke," Obama said. "When it comes to the cost of our health care, then, the status quo is unsustainable. Reform is not a luxury, but a necessity. I know there has been much discussion about what reform would cost, and rightly so... But let there be no doubt -- the cost of inaction is greater. If we fail to act, premiums will climb higher, benefits will erode further, and the rolls of uninsured will swell to include millions more Americans. If we fail to act, one out of every five dollars we earn will be spent on health care within a decade. In thirty years, it will be about one out of every three – a trend that will mean lost jobs, lower take-home pay, shuttered businesses, and a lower standard of living for all Americans."