A fresh report from the Iranian capital. The government uses machetes on the public, the public fights back. 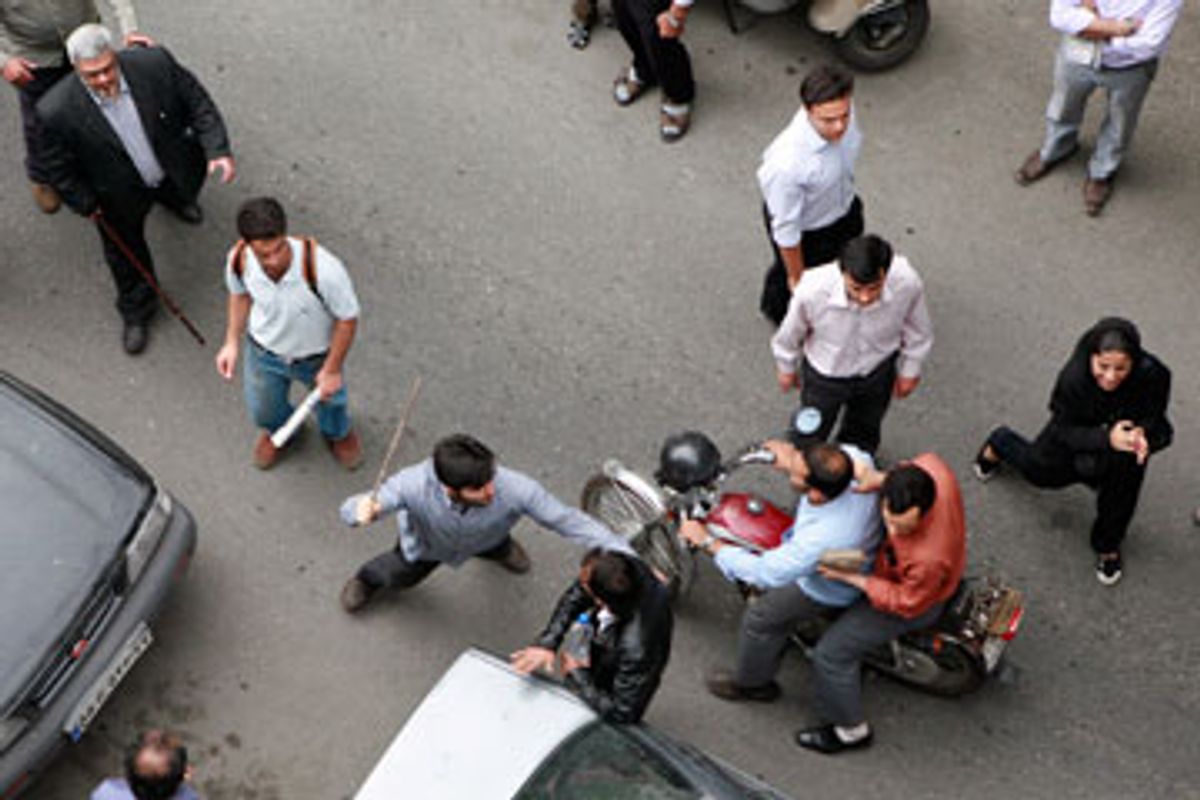 Now, three days after the election, a pattern is emerging. There is unstructured protest on the streets beginning in the late afternoon. Then, at night, it escalates.

In my own apartment complex on Monday morning we were woken up to screams and shouts. Kids from the building and elsewhere had been engaging in political rock fights in the adjoining street and had run into the complex (a typical urban apartment "tower" found in almost all of the developing world). Families went out to the fire escape to look down to see what had happened. It turned out that special police had rushed into the complex, followed by "basijis" or paramilitary forces, basically thugs on motorbikes with helmets and batons. It also turned out that they had electric rods and, to the shock of many, machetes. Several people were wounded and taken away and much of the first floor and entrance of the complex was destroyed.

After two hours there was a dramatic standoff. The gate was locked, and the elders of the complex engaged in a heated discussion with representatives of the basiji forces. "If you're chasing after someone," asked the elders, "why have you come into our homes and beaten women and children? Why have you broken all of our glass and busted the windshields on the cars in the underground parking?" The basijis left. The elders had done their best to mediate, to speak rationally to resolve the problem. That is unlikely to last as the situation in Tehran becomes more and more about force.

On buses and in taxes you hear voices saying, with resignation, "What's the point? They're all the same. Why fight it?" But then every night and even during the day clashes are occurring. This week will be critical. If the conflict can be sustained, if the pressure can be sustained -- Tehran is coming to a standstill -- then it is possible that the situation will enter a new phase.

Either way, have no doubt, the IRI, the Islamic Republic of Iran, is over. A leading cleric has already announced that we are no longer ruled by the Islamic "Republic" (jomhuri e Islami) but the Islamic government (hookoomat e Islami). Whether now or in a few months or years, the game is over.

I attended the Vali Asr demonstration of support for Dr. Ahmadinejad yesterday afternoon. The turnout was impressive, mostly families and obviously religious types (called "momen" in Farsi). Many asked that I take their pictures and the mood was festive, defiant. They were chanting, but it is critical to note that only some of the chants were against Mousavi. Almost all were directed against Rafsanjani. He is seen as the big threat. This election and its aftermath is turning out to be the climax of an outstanding feud between Rafsanjani and Ahmadinejad in alliance with the Supreme Leader, Khamanei. What will be interesting is to see what Rafsanjani does next. He is regularly described as the "power behind the power," the man with real pull in Iran. What will he do?

The man who almost certainly won the presidential election, Mir Hossein Mousavi, while known to be a man who does not back down (I know this directly from a man who worked with him directly on the Supreme Council of the Cultural Revolution), is also likely, like former president Mohammed Khatami, to try (at least at first) to calm the situation down, which is what we have already seen him do. This means that the movement and action out in the streets thus far lacks leadership. [Editor's Note: An organized protest called by Mousavi for 4 p.m. Monday in Tehran, 7:30 a.m. Eastern time, was apparently postponed. Supreme Leader Ali Khamanei has told Mousavi to pursue his challenge to the election results through legal means. Khamanei's words have been broadcast on state radio. ]

We are hearing word that presidential candidate Mehdi Karrobi, who received a suspiciously low vote total in the official count, has announced that he will no longer wear his clerical garb. Karrobi, who famously and loudly claimed that Dr. Ahmadinejad stole the presidential election from him four years ago, feels that he has been humiliated again. There is simply no way that he received around 400,000 votes -- his known supporters were more than this, and he received at least a dozen times that many in 2005. Focus on this stat for proof of how bogus this election has been.

In Tehran information is being passed around by phone and word of mouth. SMS is still down. Facebook is blocked, though easily accessed with a filter-buster.

Finally, and this may be the most important piece of news, I personally heard "Marq bar Khamanei" (death or down with Supreme Leader Ali Khamanei) said quickly and once last night. Someone in the neighborhood reported that it was said more than once. If true, and I don't know if it is, this marks a significant turning point. Up until now the chants had been "Marq bar dictator," with dictator meaning Ahmadinejad. To chant against the supreme leader is an incredible taboo. In 1979, everyone wanted the shah to fall, but no one believed that it was thinkable. Then, for some reason, it became so. The movement reached a moment of viability. While this did not guarantee the revolution's success, it was a necessary condition for events to move forward. Has the same happened now in Iran?

The 1979 Revolution, once in motion, took months to play out, but inside of it no one knew what was exactly happening. They didn’t know long it would take, or whether there would be a successful conclusion. The same applies to the situation now.