It is summer 2009, and John McCain is president

In which the author imagines what America would be like if the GOP's man had won. Critics of Obama, take note. 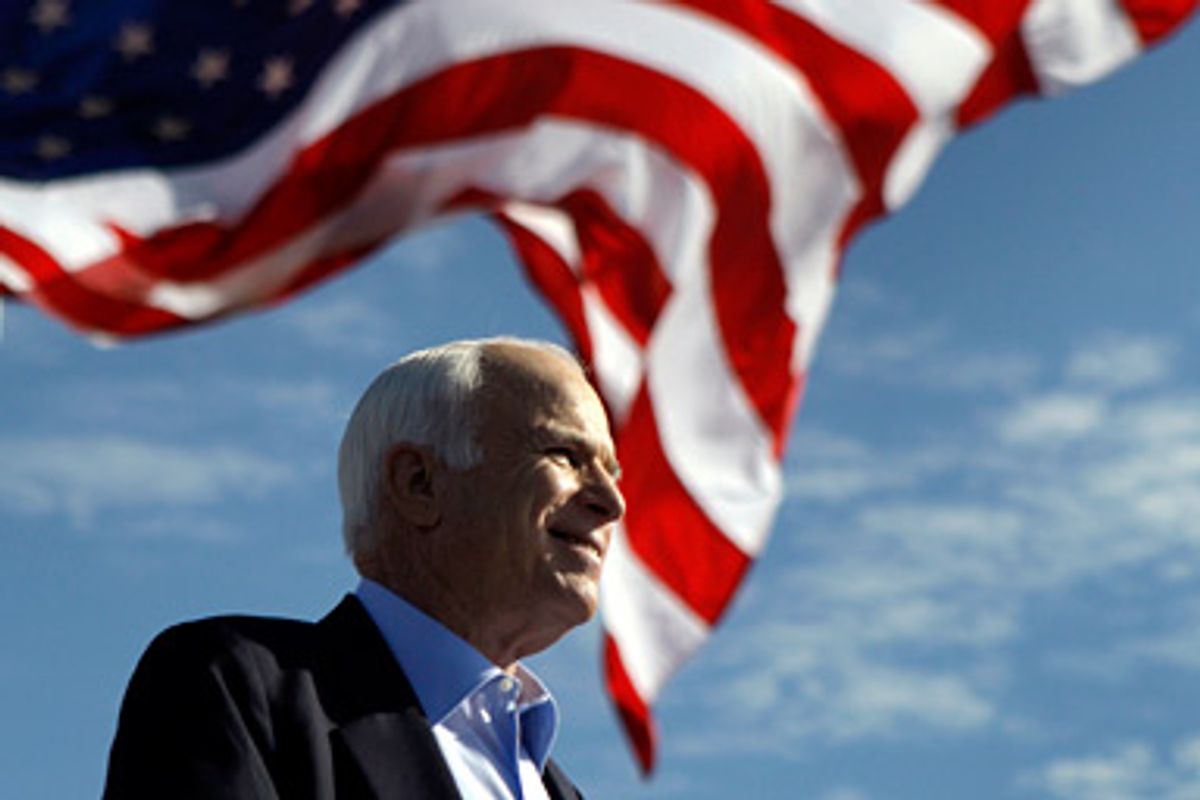 Picture, if you will, an America apparently like our own. A country like ours bogged down in war on two fronts and suffering from the greatest economic slump since the Great Depression of the 1930s. An America indistinguishable from ours in every respect except that when you turn on the nightly news you see the face of President John Sidney McCain ...

OK, Rod Serling as host of "The Twilight Zone" probably would have said it better. But seriously -- where would we be in the summer of 2009, if in last November's election John McCain rather than Barack Obama had been elected president of the United States?

"No difference!" would be the answer of those alienated populists and leftists for whom Republicans and Democrats are merely different tentacles of the same Bilderberger or Trilateral Commission octopus. Certainly from the perspectives of socialists or libertarians -- or fascists or Islamic theocrats -- the consensus shared by America's two parties seems much greater than their differences. But from the vantage point of mainstream American politics, the differences between the Obama administration and a hypothetical McCain administration would have been real and can be vividly illustrated by counterfactual history.

Let's start with foreign policy. Within the framework of U.S. geopolitical primacy shared by both parties, Barack Obama has departed significantly from the foreign policy of George W. Bush in both substance and style. With respect to substance, he is fulfilling his campaign promise to draw down U.S. involvement in Iraq cautiously while increasing resources for the fight against bin Laden's jihadists and their Taliban supporters, who, unlike Saddam Hussein, planned or suborned the 9/11 attacks.

McCain, by contrast, not only supported Bush's unnecessary and unjustified Iraq war, but has consistently been more hawkish than Bush, as difficult as that may be to imagine. Remember, during the 2000 Republican presidential primary McCain, not Bush, was the initial favorite of the neoconservatives, who proudly called themselves "McCainiacs." During the second Bush term of 2005-09, Republican realists like Defense Secretary Robert Gates (whom Obama wisely has retained) replaced neocons and neocon-friendly hawks allied with Dick Cheney such as Donald Rumsfeld, Paul Wolfowitz and Douglas Feith. If McCain had been elected, it seems likely that this would have been reversed. Neocons like Elliott Abrams, instead of dwelling in exile at the Council on Foreign Relations, might well be back making foreign policy in the executive branch.

The difference in foreign policy style would have been even more striking. America produces two kinds of soldiers -- flamboyant, aggressive warriors like MacArthur and Patton, and quiet, prudent military statesmen like Washington, Marshall and Eisenhower. McCain, the former Navy pilot and son and grandson of U.S. Navy admirals, belongs to the former mold. His patriotic and pro-military oratory is both sincere and moving to Americans -- it has often moved me -- but proclamations about the virtue of America's cause and America's invincible might that go over well in pancake dinners on the campaign trail tend to alarm people in other countries. Whatever his other lasting achievements may be, Barack Obama in only a few months has already proven to the world that all Americans are not vainglorious, swaggering, self-righteous provincials who prefer to lead by intimidation rather than by inspiration and negotiation.

Nowhere is the difference between the Obama administration and a counterfactual McCain administration greater than in Middle Eastern policy. Despite domestic political limitations, President Obama, by taking a hard line on the expansion of illegal Israeli colonies ("settlements") in Palestine, has stood up to the Israeli right and its American allies more than any president since George Herbert Walker Bush in the aftermath of the Gulf War. If McCain were president, Israel's far-right Prime Minister Netanyahu would have a close friend in the White House and the executive branch almost certainly would be staffed in part with officials with longtime ties to the Israeli right wing, as it was under George W. Bush.

McCain opposed Bush's tax cuts at the time of their passage. However, by the time he won the Republican presidential nomination in 2008, he had not only drunk the Bush Kool-Aid but mixed some more. During the campaign he proposed making Bush's tax cuts permanent and slashing an additional $300 billion.

To be sure, presidents do not always govern on the basis of their campaign promises (contrast Obama's campaign rhetoric with his present waffling on military tribunals and Chinese currency manipulation). McCain's evident lack of interest in economics, compared to military and foreign issues, helped to sink his campaign after the world economy crashed in 2008. It is impossible to be sure how he would have responded to the crisis, had he been elected. But we can make educated guesses about the possibilities.

For one thing, a division certainly would have emerged between Republicans with ties to Wall Street and populist conservatives, particularly if McCain had retained Hank Paulson as secretary of the Treasury. Just as under Obama, under McCain congressional Republicans probably would have opposed bailouts for zombie banks and other too-big-to-fail institutions. The Wall Street wing of each party tends to defeat the populist wing, except during presidential primaries every four years -- and then only in rhetoric. So it seems likely that President McCain, perhaps reluctantly, would have consented to a continuation of the Paulson policy of bailing out the financial sector to avoid nationalization. In other words, the McCain-Paulson bailout policy would probably have been very similar to the Obama-Summers-Geithner bailout policy.

When it came to the question of stimulus spending, in a world where McCain won the White House there also would have been a divide between establishment Republicans like Martin Feldstein, who support a Keynesian stimulus, and die-hard conservatives who are opposed to any government spending, except on war. One of President McCain's top economic policymakers probably would have been Douglas Holtz-Eakin, his chief economic advisor during the campaign. In January, when the Democratic stimulus bill was being criticized, Holtz-Eakin, who has long claimed that the merits of infrastructure are oversold, argued that there was too much infrastructure spending in the stimulus.

Around the same time, Republican alternatives to the Democratic stimulus were based on tax cuts rather than public spending. In today's circumstances, as intelligent Republican economists acknowledge, this would be folly. Following years in which Americans borrowed too much, it is necessary to compensate for the collapse in aggregate demand for goods and services with more public spending on infrastructure, public services and social insurance, while Americans gradually return to a pattern of saving more. It would be insanity to cut taxes, allowing recession-crippled public services like fire departments and social insurance like unemployment benefits to collapse, in order to encourage Americans to go deeper into debt by binging at the shopping mall. (Note: Such a consumption-based stimulus makes sense in countries with manufacturing trade surpluses like China and Japan, where there needs to be a shift from overproduction for export to more domestic consumption.)

But the issue is not logic but a McCain presidency. My guess is that in Counterfactual America, the Wall Street and populist wings of the Republican Party would have agreed on a compromise: a stimulus, but a small stimulus made up mostly of tax cuts for individuals and corporations. If President McCain faced a Democratic Congress, as he probably would have, he could have used the threat of a veto to whittle down a Democratic stimulus bill, putting in more tax cuts and cutting out more infrastructure spending and aid to states and cities. That's my guess, anyway.

If I'm right, then in the summer of 2009 we might have ended up with the worst possible economic policy under President McCain: a zombie bank bailout as costly and misguided as Obama's, combined with a too-small stimulus made up mostly of tax cuts. Add premature efforts at deficit reduction likely to kill off a feeble economic recovery, and the disaster would be perfect. Given that the zombie bailouts started under Bush and that tax cuts were Bush's preferred stimulus policy, in economic policy as well as foreign policy a McCain presidency might well have resembled a third term for George W. Bush.

Obama and the Democrats are not perfect and all-wise, nor are McCain and the Republicans always wrong on all issues (that statement should be good for some hate mail!). McCain in earlier years was often praised by liberals for his support of cap-and-trade legislation like the Markey-Waxman bill, which the Obama administration has embraced. But the cap-and-trade approach, as thoughtful environmentalists like Michael Shellenberger and Ted Nordhaus have argued, and the idea of punitive carbon taxes (as opposed to a modest carbon tax, which makes sense) represent a misguided approach to energy reform based on making dirty energy more expensive, rather than seeking to make clean energy cheaper by means of largely public investments in new technologies. Today's Republican Party -- not unreasonably, in my view -- favors massive long-term investment in nuclear energy, which would slash greenhouse emissions without raising electricity prices for working Americans or driving even more American manufacturing abroad. The GOP also supports increased drilling on U.S. territory for oil and natural gas, which by lowering the price of both could weaken autocratic and hostile petro-states. I disagree with the Republican Party about most things, but as the saying goes, even a blind hog finds an acorn now and then.

Healthcare is another area where McCain deserves some credit. During the campaign McCain, like Obama, favored subsidizing the purchase of private health insurance by uninsured Americans without eliminating employer health insurance plans. During the campaign Obama criticized McCain for suggesting that this could be paid for by taxing at least some employer-provided health insurance benefits. But now that Democrats want to formulate a real healthcare plan over the summer, there is a growing consensus that the costs of expanded coverage should be paid for in part by taxes on some if not all employer benefits. On that particular issue, and a few others like a greatly expanded child tax credit, candidate McCain was right.

On balance, however, I think it is hard to argue that the country would not be in worse shape today under President McCain than it is in under President Obama. In foreign policy we would probably have a revival of neoconservatism, with incalculable damage to America's reputation in the world. In domestic policy, President McCain might have used his veto power and an alliance with conservative Blue Dog Democrats in a Democratic majority Congress to salvage the Bush tax cuts and thwart an adequate stimulus. Then there's regulatory reform of the financial sector, which has yet to occur. As deferent as the Obama administration is to Wall Street, can anyone doubt that a McCain administration would have been even more deferent?

The Obama administration deserves, and can benefit from, thoughtful criticism. But before giving up on Obama after only a few months, critics of this president should ask: WWMD? (What Would McCain Do?)