Outrage and derision at Tuesday's protest outside the Ed Sullivan Theater 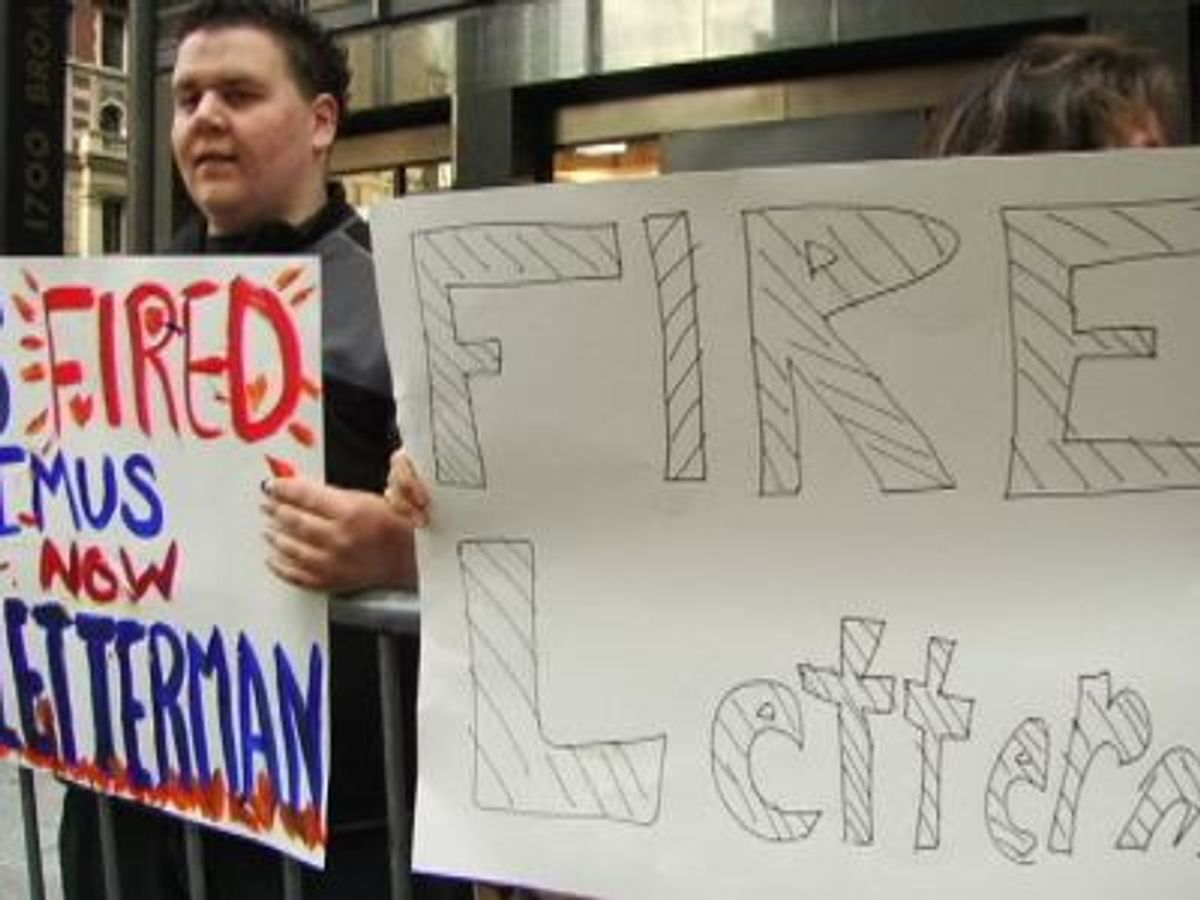 Inside the Ed Sullivan Theater on Tuesday afternoon, Letterman had a little fun with the protest in his honor. "I wanna get through this as quickly as possibly so you folks can get to the 'Fire Dave Rally,'" he joked. A man holding a sign walked across the stage.

Across the street, about 50 real protesters gathered -- not quite the 250 who RSVP'd on the event's Facebook page -- along with media and dozens of New Yorkers who stopped to watch, shake their heads and engage in an occasional impromptu spat.

"He's a comedian! That's what comedians do!" one guy yelled at the crowd. "Why don't you just turn the channel?"

"You got a mother? You got sisters?" asked Osualdo Orama, who brought his 15-year-old daughter to the event. "You can't talk about women like that."

From behind barricades, protesters held signs reading, "Dirty Ole Man" and "Fire the Pervert." For them, Letterman's apology was not enough. "A business decision," said Orama. Another woman, calling herself "Liberty" and refusing to give a last name, sneered when asked about it. "It took him almost a week to apologize," she said. "He's a cocky bastard."

Did Letterman deserve the same fate as fired radio host Don Imus? Didn't John McCain similarly rip into Chelsea Clinton during her stay in the White House? What would happen if Rush Limbaugh had made the same joke about the Obama girls? All became fodder for debate -- and shouting matches. But one of the biggest cheers came when a man paraded through the barricades with the sign, "Fire Mahmoud Ahmadinejad."

Across from the protesters, in a kind of counter rally, about five people stood with signs that read things like, "I'm a rightwing nutjob" and "Palin forced rape victims to pay for their own kits."

Only minutes later, a New Yorker passed by. "You guys oughta be ashamed," he said.

Barber shot back, "Yeah, we'll do some Hail Marys."