We supported you. Time to live up to your promises 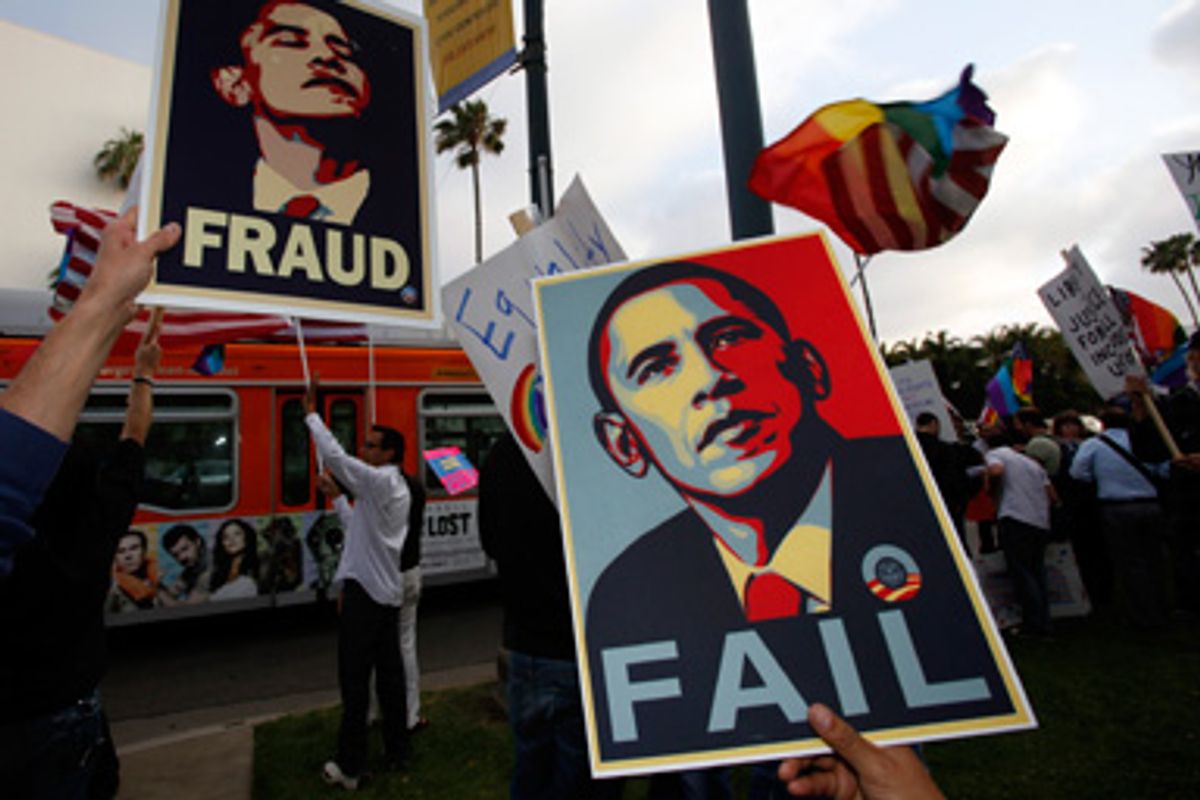 Team Obama keeps telling lesbian and gay Americans like me to be patient. If we just wait a little longer, administration officials whisper to us lovingly (and out of earshot of the media), after the White House finishes with healthcare reform and getting the troops out of Iraq, your time will come. In the meantime, cheer up -- we put a gay band in the inaugural parade!

Everyone loves a parade, but we don't like being betrayed. And while gay and lesbian Americans were initially willing to cut our new president some slack, the president's now-clear reticence to follow through on even one of his many campaign promises to the gay community has put the Democratic Party on the precipice of an ugly and very public divorce with this once-solid constituency.

During the presidential primaries, then-candidate Obama promoted himself as the biggest defender of gay rights since Harvey Milk. He would be a "fierce advocate" for our rights, he promised, and he even out-gayed Hillary Clinton: telling gay and lesbian voters that while she was for a partial repeal of the so-called Defense of Marriage Act (DOMA), he'd get rid of the whole damn thing.

And there was much rejoicing.

Then, not so much.

About a year before the November election, primary challenger Obama invited Donnie McClurkin, a homophobic gospel singer who claims to have been "cured" of his own homosexuality, to lead a series of concerts in the South in order to woo the black vote. The gays were not amused, but candidate Obama held firm. The gays forgave the Big O until a year later, when then-President-elect Obama chose evangelical preacher (and well-known homophobe) Rick Warren to give the inaugural prayer. Again, the gays expressed their ire, Obama wouldn't budge, and his advisors continued to whisper sweet nothings in our ears about how glorious the future would be once Dear Leader was finally in office.

But a funny thing happened on the way to equality. Rather than clouds opening up and angels descending from on high, Barack Obama became president and things never got better for the gays. In fact, they got decidedly worse.

On taking office, Obama immediately announced that he was doing away with the Clinton-era concept of special assistants who served as liaisons to various communities like gays and Latinos. He then went ahead and appointed special liaisons to some of those communities anyway, but never to the gays. Around the same time, the White House Web site, once detailing half a page of presidential promises to the gay community, overnight saw those pledges shortened to three simple sentences. Gone were five of the eight previous commitments, including the promises to repeal both Don't Ask Don't Tell and DOMA. Adding to a growing sense of angst, senior White House officials kept telling the media that they weren't sure when, if ever, the president would follow through on his promises to the gay community. Then there were the Cabinet appointees. Three Latino nominees but nary a gay in sight. And finally, last week our president had his Department of Justice file a brief in defense of DOMA, a law he had once called "abhorrent." In that brief, filed on the 42nd anniversary of the Supreme Court ruling in Loving v. Virginia (which outlawed bans on interracial marriage), our own interracial Harvey Milk, not lacking a sense of historical irony, compared our love to incest and pedophilia.

First problem, federal agencies already have the right to provide these benefits to gay employees -- and several, including at least one DOD agency, do. Second problem, the administration can’t tell us exactly which benefits they’re talking about and for which employees. That’s because this was all hastily thrown together after the incestuous and pedophilic gays nearly brought down a Democratic National Committee gay pride fundraiser scheduled for next week. A gay blogger got hold of the event’s guest list and published it, and once D.C.’s gay paper, the Washington Blade, announced that it would be staking out the entrance to the event with camera and video, the $1,000 a head attendees started dropping like flies.

In other words, the only reason we're getting anything: The gay ATM ran dry.

Don't get me wrong. Some federal employees getting some benefits at some future point is definitely something. But it's not an answer to why this president directed his Department of Justice to defend a law he previously opposed when he didn't have to. It doesn't explain why the DOMA brief linked a key Democratic constituency to pedophilia and incest. Or why this president has already overseen the discharge of 253 gay service members, and has refused to issue a stop-loss order ceasing those discharges. Or why he won't lift a finger to push Congress to repeal Don't Ask Don't Tell.

The president would like us to believe that he's awfully busy being president, and if we only wait a little while longer, we'll get our rights. Of course, the president isn't too busy to stab the community in the back by continuing the military discharges, defending DOMA, and comparing us to pedophiles. (On Wednesday, White House spokesperson Robert Gibbs was given a chance to repudiate the DOMA brief's language about incest and pedophilia and would not.)

When, Mr. President, will be a good time to set my people free? When will the leader of the free world get a breather, a presidential timeout as it were? (And I thought this was the administration that could walk and chew gum at the same time.) Are we really to believe that 2010, a congressional election year, will be any more timely than today? Or 2011, the beginning of the presidential primaries? Or 2012, with a congressional and presidential election? There is quite literally no time like the present.

The real problem is that Team Obama is stuck in 1993. Perhaps some advisor has convinced our once-fierce advocate that gay rights is the third rail of presidential politics. Just look at what happened to President Clinton 16 years ago when he tried to help the gays, the insider is likely warning.

But 2009 is not 1993. Sixty-seven percent of Americans now favor granting same-sex couples the right to marry or join in civil unions. Sixty-nine percent support letting openly gay men and lesbian women serve in our military, including a majority of Republicans (58 percent), conservatives (58 percent), and even churchgoers (60 percent). And an overwhelming number of Americans have long since supported passing legislation banning job discrimination against gays.

The controversy is in President Obama's mind -- at least it was until it became real and moved to the Democratic Party's pocketbook.

What can the president do to avoid outright rupture with the gay community? He needs to start fulfilling his campaign promises -- even one would be a nice start. He needs to stop the discharges, and stop the Falwellian legal briefs in support of a policy he opposes. He needs to push -- really push -- for legislation banning job discrimination, repealing DOMA, and lifting Don't Ask Don't Tell.

Many of us were willing to cut our new president some slack. Not anymore.

John Aravosis is a longtime gay rights advocate and the editor of AMERICAblog.com.